Investors seem to be overlooking the impact low oil prices are having on oil-field service stocks.

Shares of oil-field service companies rallied sharply today. By 3 p.m. EDT, NexTier Oilfield Solutions (NYSE: NEX) was up more than 40%, while peers Patterson-UTI Energy (PTEN -1.35%) and ProPetro Holdings (PUMP 0.62%) were up 25% and 12%, respectively. Those rallies came even though Patterson-UTI reported ugly first-quarter results with an even more dire outlook for what's ahead.

Instead of focusing on those negatives, investors bid up energy stocks today due to a rally in oil prices. The June contract for WTI, the main U.S. oil price benchmark, zoomed more than 20% to around $17 a barrel on the hope that more producers will cut production and ease the industry's glut of oil. 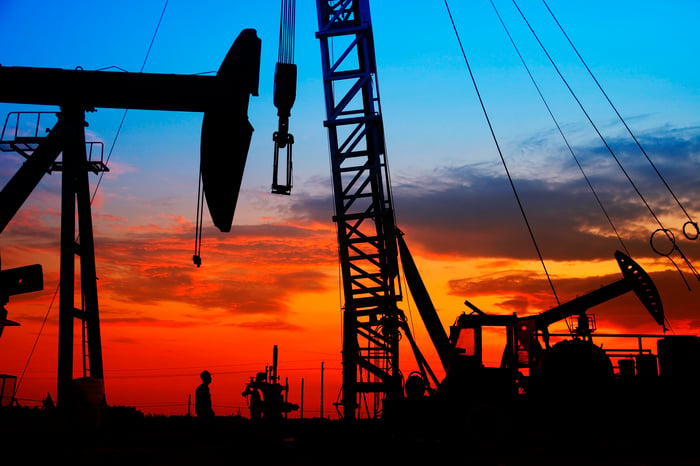 Patterson-UTI provided investors with a glimpse of how bad things are for U.S.-focused onshore service companies. Its first-quarter revenue plunged 37%, which caused it to report a loss of $0.45 per share. It noted that it had 123 rigs operating at the end of the quarter, which was down 30% year over year.

However, as bad as that quarter was, it expects conditions to get far worse, given the historic plunge in oil prices this year. Patterson anticipates exiting the current quarter with only 70 rigs working for customers. Further, it noted that its customers likely won't start completing more wells in the third quarter, suggesting that the industry is going through more than a temporary "frack holiday."

Driving this downbeat forecast is the significant spending and activity reductions across the industry as crude prices plunged from the $60s to start the year to negative territory earlier this week. Devon Energy (DVN -1.38%), for example, has already slashed its spending twice this year, cutting it by 45% overall. Devon's latest cuts will result in a deferral of activity in the Eagle Ford Shale. That follows an earlier postponement in its STACK and Powder River Basin assets. As a result, it's only operating in the Permian Basin. Apache (APA -2.17%), meanwhile, previously cut its rig count in that region down to zero. That move, along with other reductions, will help preserve Apache's balance sheet so that it can stay afloat during this downturn.

Because drillers are cutting deeply into their spending and activity levels, service providers like Patterson are making moves to preserve their financial flexibility. It's slashing its dividend by 50% and plans to enact additional cost savings to shore up its balance sheet. NexTier recently made some similar moves as it slashed its capital spending by $100 million and idled some of its fracking fleet to align its operations with market conditions. ProPetro, meanwhile, cut the salaries of some of its executives this month as it works to combat the severe impact the oil market downturn is having on its operations and finances.

Investors, however, are completely overlooking this bleak picture today. Instead, they're focusing on the fact that oil prices are rallying and bidding up oil stocks, though some of the buying could be due to short covering.

With crude oil trading at less than $20 a barrel, oil companies will likely continue to cut capital spending and delay drilling new wells. Because of that, it could be quite a while before service companies see an activity rebound. That could cause significant financial stress on these companies, with the potential for weaker ones to end up joining many drillers in bankruptcy. Because of that, investors should avoid these oil stocks since it's not clear how many will survive this downturn.