Please ensure Javascript is enabled for purposes of website accessibility
Log In Help Join The Motley Fool
Free Article Join Over 1 Million Premium Members And Get More In-Depth Stock Guidance and Research
By Matthew DiLallo - Apr 23, 2020 at 11:37AM

A rebound in the oil market is giving these dividend payers a boost today.

Oil prices continue to rebound following their historic plunge into negative territory earlier this week. The June contract for WTI, the leading U.S. oil benchmark, surged more than 30% by 11 a.m. EDT, pushing it back above $18 a barrel. 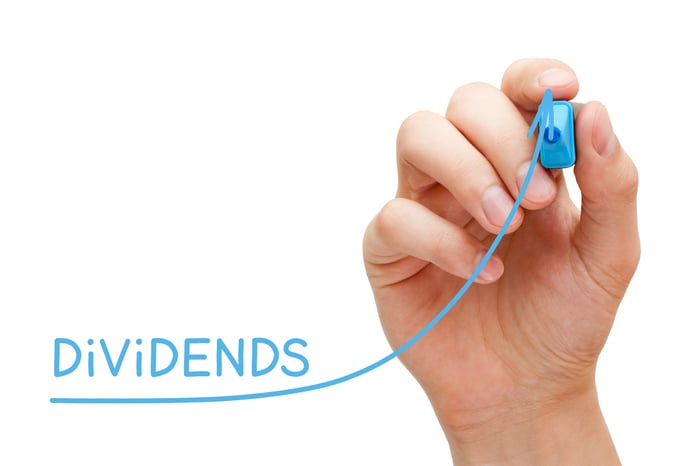 Investors had abandoned the midstream sector as crude prices sold off over the past few months. The Alerian Energy Infrastructure ETF -- which holds companies focused on gathering, processing, transporting, and storing oil and gas -- shed more than 60% of its value at one point this year and is currently down about 40% from its high. Fueling that sell-off was the fear that these companies would need to slash their lucrative payouts to survive the downturn in oil prices.

Those fears have come to fruition. EnLink, DCP Midstream, and Western Midstream all slashed their payouts 50% over the past few weeks, while Targa cut its an even deeper 89%. On top of that, each company reduced its capital spending programs and cut other expenses. These moves will enable them to reduce debt and enhance their financial flexibility.

With these companies making moves to shore up their balance sheets, and oil prices bouncing back, it's giving investors a bit more confidence that they can survive this downturn.

However, even with today's rally, the market has some questions about the long-term durability of these companies and their ability to pay their recently reduced dividends. That's evident in their dividend yields, which remain in nosebleed territory. DCP Midstream, for example, still yields nearly 20%, while Western Midstream and EnLink yield 18% and 22%, respectively. Because of that, investors still think another reduction might be in the cards similar to what Targa did when it slashed its payout, pushing its yield down to around 4%.

One reason investors remain suspect of these high-yielding stocks is that ultra-low oil prices will make many of their customers insolvent if pricing doesn't improve dramatically in the coming weeks. That could cause a wave of bankruptcies to sweep across the sector, with one potential outcome being a forced rate reduction by midstream companies. This result would cut deeply into their cash flows, putting more strain on their balance sheets and likely leading to another round of dividend reductions.

Oil prices are bouncing back today due to the belief that the industry will eventually work through its oversupply issue. That could come from an additional OPEC cut or a blockade in the Persian Gulf, given the recent saber-rattling between the U.S. and Iran.

However, there has been so much carnage in the sector that it will take a while to dig out of this mess. Several companies will be so impaired by the downturn that they'll have no choice but to file for bankruptcy, which will impact service providers like midstream companies. It's not clear how bad things might get, which is why investors should avoid stocks with sky-high yields for now since they might not endure the troubles that likely still lie ahead for the sector.