Please ensure Javascript is enabled for purposes of website accessibility
Log In Help Join The Motley Fool
Free Article Join Over 1 Million Premium Members And Get More In-Depth Stock Guidance and Research
By Pearl Wang – Apr 24, 2020 at 8:11AM

Blockbuster numbers in March show how much people are turning to video games during the pandemic.

Video game sales soared in March 2020 and are expected to remain strong as millions of people observe stay-at-home orders amid the coronavirus pandemic.

Spending on video game software, hardware, and other accessories reached $1.6 billion in March, up 35% year over year, according to data from the NPD Group. This was the largest amount of video game spending in March since 2008, when sales hit $1.8 billion. Hardware and software sales increased 63% and 34%, respectively, last month.

One company that will benefit from the surge in gaming and related revenue is Activision Blizzard (ATVI 0.24%). The global video game publisher has the top-selling video game of 2020 and the second best-selling game in March: Call of Duty: Modern Warfare. In mid-April, CEO Bobby Kotick also provided a business update and cited record levels of engagement for most of the company's games. He noted that the surprise March release of Call of Duty: Warzone had already drawn 50 million players. 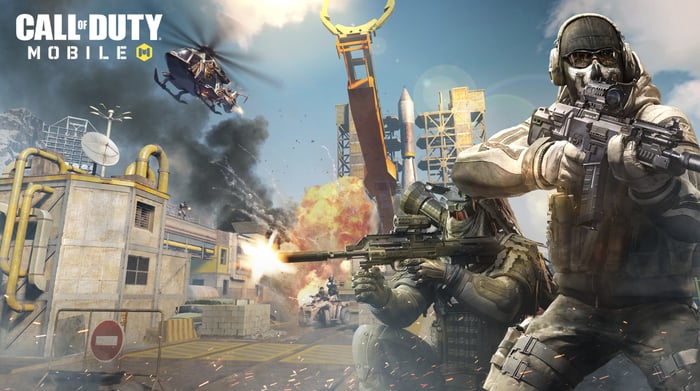 The entertainment of choice for people all over the world

As people practiced social distancing in the U.S. in late March, many of them turned to video games for both entertainment and socializing. From its survey of 3,000 gamers in the U.S., Germany, France, and the U.K., Nielsen found that 45% of those surveyed played more video games in the week ended March 29 vs. the prior week, and 39% of those surveyed in the U.S. are spending more money on video games since the start of the pandemic. This recent spike in demand bodes well for Activision Blizzard in 2020.

In the company's fourth-quarter earnings release, Activision beat analysts' top and bottom-line estimates, citing the success of its Call of Duty franchise that boasts an audience of 100 million players. Kotick expects "significant growth in the Call of Duty franchise in 2020 as compared to 2019," and he cited additional initiatives for the franchise, including a broadcast relationship with YouTube that gives over 200 million viewers access to Activision's content. According to NPD Group, March sales of Call of Duty franchise titles reached a new all-time high for that month, exceeding the previous peak set in March 2010.

In the fourth quarter, the Activision segment's monthly active users (MAUs) more than doubled from the previous quarter, though sequential growth for the Blizzard and King divisions was approximately flat.

The consumer-discretionary company has many growth drivers in the near and medium term. First, Call of Duty: Modern Warfare saw double-digit increases in unit sell-through across consoles and PCs in the fourth quarter. Activision also launched content updates with World of Warcraft Classic in 2019, which is expected to boost engagement.

The launch of Call of Duty Mobile in Oct. 2019 attracted a record-breaking 100 million downloads in the first week after its launch. The game is free to play, but participants can buy add-ons, including equipment and tools for the game. This is a huge growth opportunity for Activision, given the size of the mobile gaming market -- an estimated $76.7 billion in 2020, according research firm Newzoo.

As a wide swathe of industries see shrinking sales with shelter-at-home orders keeping customers stuck at home, Activision Blizzard is thriving and can do so even during an economic downturn. Long term, mobile gaming growth and the company's portfolio of industry-leading titles will fuel growth and reward shareholders.