The healthcare regulator says that hydroxychloroquine and chloroquine are causing dangerous heart issues in coronavirus patients.

The Food and Drug Administration on Friday issued a safety warning to healthcare providers, instructing them to stop prescribing hydroxychloroquine and chloroquine to people with COVID-19 being treated on an outpatient basis. The health regulator cited reports of serious heart rhythm problems among coronavirus patients who had been treated with the drugs, which were originally used to fight malaria, a parasitic disease.

Evidence on the way

The two drugs in question are synthetic analogs of quinine, a compound that was extracted from tree bark and used as an antimalarial for centuries. More recently, quinine analogs have been shown to provide a variety of benefits beyond parasite prophylaxis, mainly as treatments for lupus and other serious autoimmune disorders. 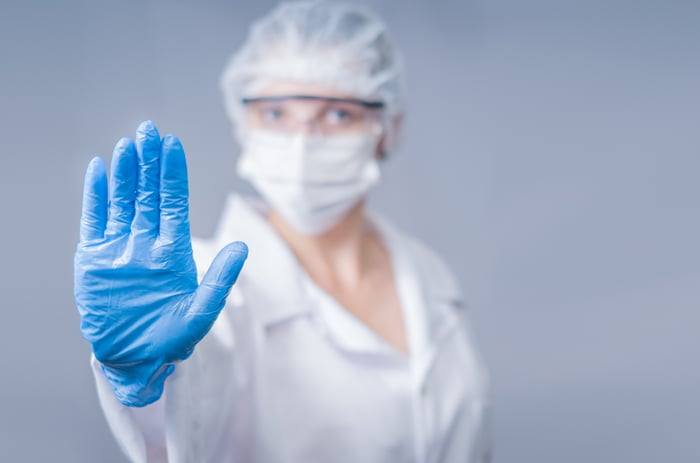 Novartis (NVS -1.84%) markets hydroxychloroquine, and the global pharmaceutical giant is currently running a study with COVID-19 patients randomized into groups receiving either the drug or a placebo. At the moment, though, there's nothing but anecdotal evidence to suggest quinine analogs effectively fight the coronavirus.

And indeed, this week, the Veterans Administration reported on a retrospective study it conducted, that found COVID-19 patients who had been treated with hydroxychloroquine had a significantly higher death rate than those who had not. But that was not a randomized clinical trial, so it may be too soon to write the treatment off.

Hydroxychloroquine hasn't been proven effective at fighting other lethal coronaviruses that invade the respiratory system. Unfortunately, the malaria drug has been shown to cause abnormal heart rhythms that lead to fainting, seizures, and sometimes death.

Risk of life-threatening heart conditions such as QT interval prolongation is also a reason not to take azithromycin unless you're near people who can help your heart regain a steady beat. Since that antibiotic is often given to coronavirus patients to prevent secondary infections, the possibility that the combination could cause a bad reaction among patients who are especially vulnerable is a huge risk to consider.

If clinical trial results from Novartis show a strong benefit, the FDA will quickly adjust its recommendations. Until then, healthcare providers need to treat quinine analogs as too risky for patients outside of a hospital setting.