Please ensure Javascript is enabled for purposes of website accessibility
Log In Help Join The Motley Fool
Free Article Join Over 1 Million Premium Members And Get More In-Depth Stock Guidance and Research
By Evan Niu, CFA - Apr 24, 2020 at 9:00AM

The Mac maker will update its capital return program when it reports earnings next week.

Amid the COVID-19 pandemic and the related economic fallout, buyback programs have become increasingly controversial, as many companies are struggling financially after spending years repurchasing stock. Many have suspended buyback programs in order to preserve cash that will be instrumental in surviving a public health crisis that has brought much of the global economy to a halt. In fact, the coronavirus stimulus bill prohibits any company taking government money from repurchasing shares until a year after loans are paid back.

However, many of those broad criticisms don't quite apply to Apple (AAPL -0.14%) for a few simple reasons: The company has so much money that it can avoid mass layoffs (Apple is still paying hourly retail workers even though they're unable to work); it won't need to be bailed out by the government; it continues to invest heavily in research and development (R&D) for future products; and it still has enough cash left over to repurchase shares in line with its capital allocation strategy. 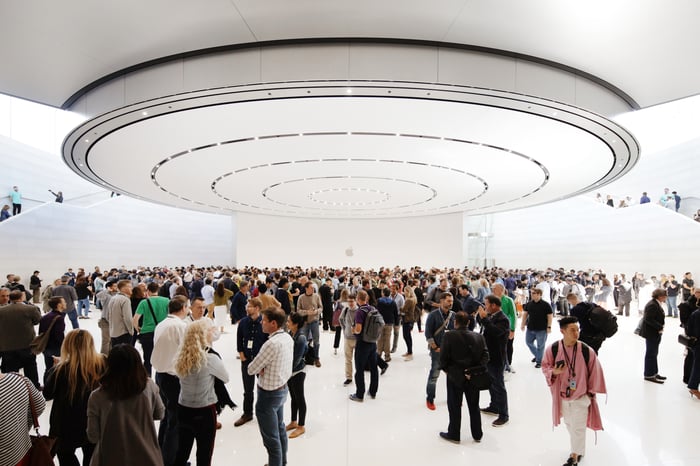 Apple updates its capital return program every April or May, when it reports fiscal second-quarter earnings results. That release is scheduled for next Thursday, April 30. How much will Apple add to its repurchase authorization this time around?

Trying to give it all back

Analysts are expecting Apple to continue aggressively buying back its stock, potentially adding $75 billion to $100 billion to its authorization, MarketWatch reports. Apple shares have always traded at low valuations -- in part because the sheer size of Apple's program boosts EPS -- but recent market volatility has made the stock even cheaper.

For reference, Apple had repurchased $326.1 billion in stock cumulatively through the end of 2019, leaving a little under $60 billion left on its total $385 billion authorization. 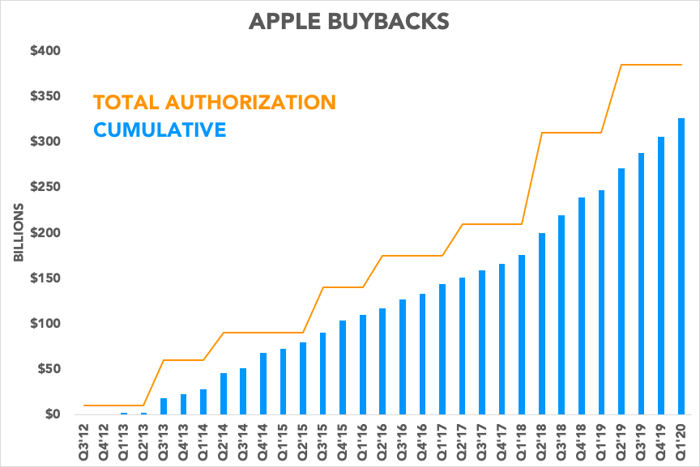 Here's how much the Cupertino tech giant has boosted its authorization since kicking off the program in 2012. An increase of $75 billion to $100 billion isn't out of the question considering the boosts in recent years.

Two years ago, Apple CFO Luca Maestri laid out a "net cash neutral" strategy whereby the company aspired to return enough cash to shareholders that its cash position and debt were roughly equal. Other than an offering late last year, Apple has mostly refrained from issuing more debt ever since tax reform was passed in 2017.