Slack’s collaboration platform rocks. But can it return a rockin’ result for shareholders?

Well-known investor and author Peter Lynch coined the phrase multibagger in his book, One Up on Wall Street, to describe the price increase of a stock that more than doubles. A 10-bagger is a stock that's grown to 10x its initial investment, an uncommon event which can also coincide with that stock qualifying as a millionaire maker. Investors seeking these exceptional stocks should look for a leading company that's winning in a huge market.

One such company could be Slack Technologies (WORK), which is being helped by recent events related to the coronavirus pandemic but is also dealing with a deep-pocketed competitor. Let's take a closer look at this company and wrap up our analysis by answering the question: Can this communication platform specialist be a millionaire-maker stock? 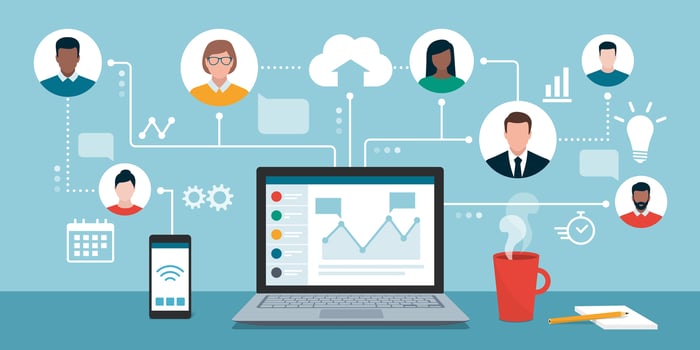 The business of a communication platform

Slack's software can be explained simply as an alternative to email, but it does much more than just replace the nearly 49-year-old electronic mailbox. Slack messages are posted to "channels" versus being routed to an individual. Channels can be set up for organizations, projects, or even interest groups. Once a channel is set up, people are added and collaboration can begin. This unique teams-first design might be why 87% of users say it "improved communication and collaboration inside their organization." But the platform is not just for exchanging messages; it integrates with more than 2,000 applications, making the software a centralized hub to get things done.

Users love the platform. Its Q4 earnings release indicated it had 110,000 paying customers, 25% more than the previous year. Its subscription-based revenue has topped $630 million for its most recent fiscal year ending Jan. 31, 2020, a 57% gain over 2019. Once a customer starts using the product, they are likely to expand usage across the organization or move up to a higher-cost subscription. As a result, the company's net dollar-retention rate has been at or above 132% as long as this metric has been reported.

Recently, the platform has seen a huge surge in usage.

Many companies have had to put large-scale, remote-working arrangements in place literally overnight due to the coronavirus pandemic. This unprecedented move has accelerated Slack's paid customer adoption. Over an eight-week period in February and March, the company added over 9,000 new paying customers, which is an 80% increase from the 5,000 customers it added in its most recent quarter.

This pandemic will likely cement remote work as a regular occurrence, rather than a one-off event, for employees. With over 550,000 organizations having some exposure to its free limited-function subscription plan, this accelerated adoption may be only the beginning. But this trend is also pushing workplaces to give Microsoft's (MSFT 1.70%) competing product a go.

The software juggernaut bundles its Slack-like application, Teams, as part of its Premium Office 365 products for businesses. Since November, it reported that daily active users have more than doubled to 44 million, and CEO Satya Nadella has indicated it's the fastest-growing application in the company's history.

Diving in, comparisons between the platforms prove to be a little difficult. Microsoft defines daily active usage as "the maximum daily users performing an intentional action in a 24-hour period across the desktop client, mobile client, and web client." Small actions such as joining a meeting or replying to a chat in Teams count as an "intentional action."

Data from Wikipedia and company press releases. Table by the author.

Slack's daily active usage is markedly different. In October 2019, the company published a blog post titled Not all Daily Active Users are created equal, which shared numerous engagement metrics, including one that showed its 12 million active daily users spend more than 9 hours on the platform and an average of 90 minutes interacting with the tool.

The sticky platform is also winning customers from the software goliath. On its most recent earnings call, CEO Stewart Butterfield explained that four of five of Slack's biggest deals in Q4 were against Teams and stated, "the majority of our $1 million customers also use Office 365..."

With millions of companies around the world still dependent on decades-old email technology (that nobody really likes), the battle to win customers in this massive market is still in the early innings.

Could Slack return 10x for investors? Let's look to software-as-a-service giant Adobe (ADBE 2.48%) for a clue. It sports a current market cap of $165 billion, which is a little over 10 times Slack's $15.7 billion. It's a market leader in two huge software segments: document management and tools for creatives. Following similar logic, the collaboration platform specialist would need to be the clear market leader in its current business and either expand into complementary markets or spin up a new vertical. This is a tall order given where the company is today. So for now, the chances of Slack being millionaire-maker stock look pretty small.

But that doesn't mean it's a lousy investment. A mind-blowing 129 billion business emails were sent per day last year -- that's a world of opportunity for Slack.