In an update on its business, the big-box chain said profits for the current quarter would take a hit.

Like its March update, this one contained some valuable nuggets of info for both Target investors and those following the broader retail sector. Here are some of the key numbers the big-box chain shared:

On a top-line basis, Target is clearly performing well. The company noted that it has gained market share across all of its core merchandise categories. However, the retailer is also taking on significant incremental costs, as changes in its supply chain to cope with the surge in digital sales and higher wages and bonuses for staff have added up. Target said it would continue its $2/hour temporary wage increase through May 30, which comes on top of the $300 million investment in wages, bonuses, paid leave, and benefits that it announced in March.

Because of those investments and expenses, as well as a shift to lower-margin categories like food and beverage and inventory writedowns for unsold apparel and accessories, Target said that its operating margin for the first quarter will fall by more than 5 percentage points from the previous year. That implies an operating margin of less than 1.4%, compared to 6.4% in the year-ago period, threatening its quarterly profit.

Target, nonetheless, defended its strategy. CEO Brian Cornell said, "While this crisis will certainly put near-term pressure on our profitability, that pressure is far outweighed by doing right by our team and our guests. We're confident the actions we're taking today will drive growth and greater guest affinity over the long-term."

Target is making the right move by focusing on long-term growth, but the impact on its profit carries a warning for the broader retail sector. 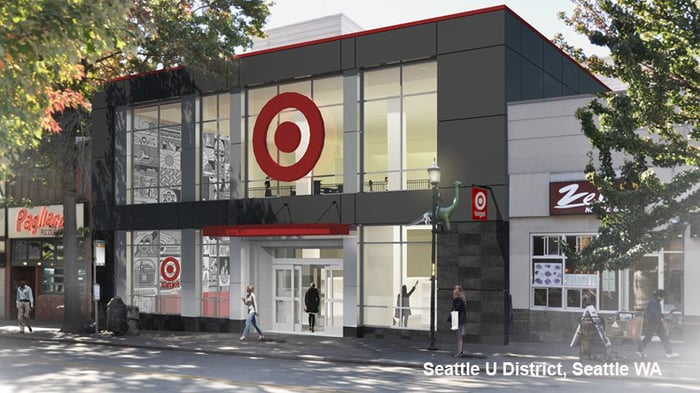 All retailers will bear extra costs

Target has a unique product mix among retailers, as its sales are typically spread roughly evenly over its five product categories (apparel and accessories, beauty and household essentials, food and beverage, hardlines, and home). However, the underlying message in its update applies to its closest retail peers as well.

First, most retailers are now enforcing social distancing protocols, meaning that in-store comparable sales are likely to fall even at chains like Walmart (WMT -2.50%) and Costco (COST -4.26%) that have seen high demand. Methods like curbside pickup and online delivery tend to be more costly than in-store shopping. Second, other diversified retailers like Walmart, Costco, and Amazon (AMZN -3.01%) are seeing the same product mix shift to lower-margin items like food, beverages, and essentials, dampening their profit margins. Third, a number of retailers -- including Walmart, Costco, and Amazon -- are paying higher wages and bonuses like Target. Amazon itself said the recent wage increases would cost more than $500 million just through April.

Additionally, all retailers, whether brick-and-mortar or online, will face additional costs for the foreseeable future to prevent the spread of coronavirus in their stores and warehouses. That means outfitting workers with personal protective equipment, doing temperature checks, and additional cleaning. These companies also may need to keep paying higher wages in order to reward workers for doing what have become dangerous jobs.

Amazon may be most at risk here, as the company has long been in the spotlight for its labor practices. At least 300 of its warehouse workers were expected to walk off the job this week, and corporate employees hosted a "virtual sick out" on April 24. The company has also experienced outbreaks at a number of its warehouses, including one in New Jersey where over 30 workers tested positive for COVID-19.

Despite those risks, Amazon stock has surged since hitting a bottom in March, recently reaching an all-time high. Walmart shares recently set a record as well.

Like Target, sales at Amazon, Walmart, and Costco are no doubt surging during the crisis, but investors may be underestimating the toll that these unforeseen costs are taking on the bottom line. Though these retailers should emerge from the crisis in a strong position compared to peers that are clearly suffering, the future remains uncertain and will be challenging for at least several more months.