Please ensure Javascript is enabled for purposes of website accessibility
Log In Help Join The Motley Fool
Free Article Join Over 1 Million Premium Members And Get More In-Depth Stock Guidance and Research
By Rich Duprey – Apr 27, 2020 at 9:05AM

Exiting most of the business it bought less than a year earlier means it wasn't as shipshape as believed.

Getting back into the boating business was always a curious choice for Polaris Industries (PII -2.05%), which previously said there was little in common between watercraft and its powersports customers.

Subsequently, at the time of its Boat Holdings acquisition in 2018, it said 30% of its customers also owned a boat, suggesting some nexus between the two. But the coronavirus pandemic has revealed that Polaris' deep dive back into boats was not just ill-timed, but also that it shouldn't have happened at all. 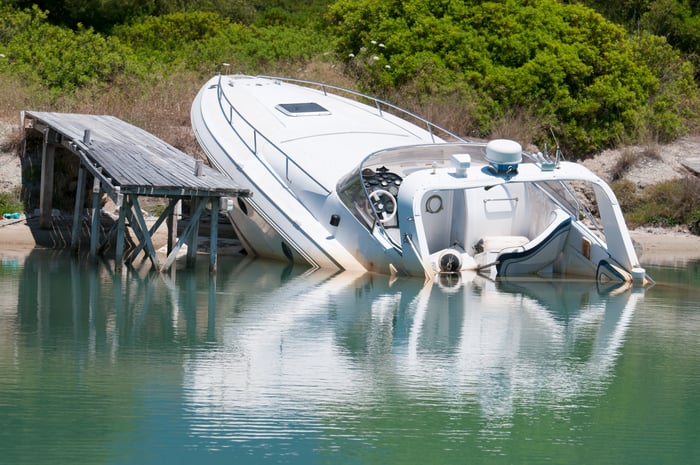 Although COVID-19 has wreaked havoc across numerous industries, manufacturers of big, expensive discretionary products like boats, motorcycles, and off-road vehicles have been hit especially hard.

No business can plan for a pandemic, but even when Polaris purchased Boat Holdings and made the subsequent acquisition of Larson Boat Group, it didn't make much sense despite the customer connections.

A number of Polaris' existing businesses were seeing sales sag from increased competition and the changing dynamics of their industries, and the company was increasing its debt load even as its cash on hand shrank. Also, the economy was starting to look shaky as the bull run was losing energy.

Getting into a new industry completely different from ones it was familiar with meant Polaris needed to divert attention and resources from shoring up its existing businesses when they needed it most.

Although Polaris doesn't seem to be in immediate risk, it did suspend operations at various plants in mid-March when demand fell; it has since restarted some production. It also furloughed most of its employees for two weeks while drawing down an incremental $150 million under its revolving credit facility to give it $420 million cash in the bank. Long-term debt at the end of the fourth quarter stood at $1.7 billion.

Those are all prudent moves management needed to make, but Polaris also just announced it was discontinuing production of its Rinker, Striper, and Larson FX boat brands because the pandemic has completely changed market dynamics.

The company said it had planned on expanding these brands prior to the pandemic, but now things have changed so much that it will instead abandon the brands, focusing its efforts on the pontoon and deck boat business. This suggests Polaris might not have understood the industry as well as it thought it did.

When Polaris bought Larson, for example, CEO Scott Wine said the prime motivation was that "it was just a very cost-efficient way for us to enter the very attractive fishing segment." Now it's exiting the market.

Sure, the pandemic's stay-at-home mandates have upset the industry, but Polaris could have simply mothballed its expansion projects until the crisis passed. Buyers won't return right away, but abandoning the segment completely indicates the powersports-vehicle maker misunderstood the market for cruisers, and fishing boats, that it had only recently thought of as a growth opportunity.

Polaris is not scuttling all of its ships. It says it will focus its investments on its Bennington, Godfrey, and Hurricane lines. These are all pontoon and deck boats, which remain popular because of their versatility. Still, Polaris intended on exiting from Larson's own pontoon business right from the beginning, which means its latest decision is effectively shuttering the 100-year-old boat maker.

The situation remains a shipwreck

There may be some overlap between the customers of Polaris Industries' watercraft business and its powersports business, but the pandemic has revealed the ties are much more tenuous than investors were led to believe.

Fortunately boats is one of Polaris' smallest segments, accounting for 9% of total sales, or slightly more than its motorcycle business, though that percentage will now decline. It means that even if this particular venture was misguided -- and at the time Polaris said Larson was the smallest acquisition it ever made -- the impact will be minimal on overall performance.

Although jumping ship on whole sections of the market after less than a year calls into question why Polaris ever set sail on this voyage to begin with, it at least indicates management is able to quickly identify mistakes it may have made and is willing to correct them instead of riding them into the ground.