Please ensure Javascript is enabled for purposes of website accessibility
Log In Help Join The Motley Fool
Free Article Join Over 1 Million Premium Members And Get More In-Depth Stock Guidance and Research
By Will Healy – Updated Apr 28, 2020 at 3:40PM

Keurig Dr Pepper (KDP -0.83%) saw its stock shoot higher in trading Tuesday as both earnings and revenue came in well ahead of analyst estimates. The company also reaffirmed its guidance for fiscal 2020.

However, this consumer staples stock may not get the recognition it deserves. When it comes to the non-alcoholic beverage space, investors tend to think of the largest soft drink company, Coca-Cola, or its archrival in the cola wars, Pepsico. However, the Keurig Dr Pepper umbrella includes numerous beverage brands ranging from soda to coffee and tea to juices. Moreover, with the company maintaining earnings growth amid a pandemic, it remains well-positioned to provide both growth and income to investors.

Though somewhat influenced by COVID-19, the latest quarterly report affirms the company's ability to prosper during a crisis. Keurig Dr Pepper reported earnings of $0.29 per share in the first quarter. This was up from $0.25 in the year-ago quarter. It also came in ahead of estimates by $0.02 per share. The company also reported net sales of $2.61 billion. This represents a 4.4% increase from the first quarter of 2019 when it announced net sales of $2.50 billion.

Unlike many companies, Keurig Dr Pepper reaffirmed its 2020 guidance. The company projects full-year 2020 diluted earnings to come in between $1.38 and $1.40 per share. Consensus estimates previously stood at $1.36 per share. It also expects net sales growth in the 3% to 4% range. Even if their prediction that it will be closer to 3% proves true, it comes in ahead of previous consensus estimates of around 2.1%. 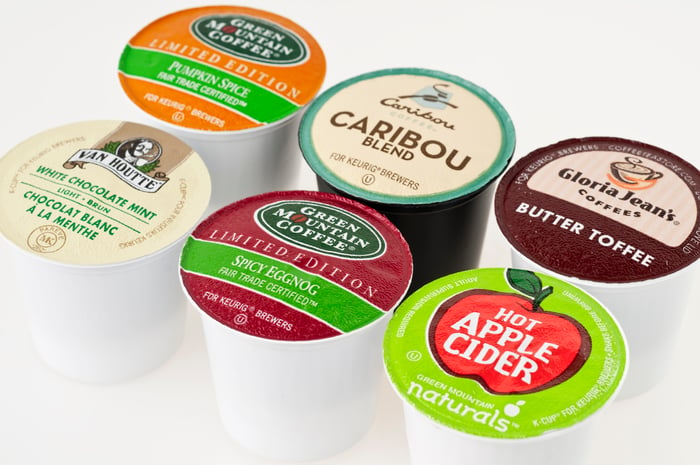 Given these numbers, one can understand why Keurig Dr Pepper stock shot higher in morning trading. However, even with the increase, investors have a tremendous incentive to consider this stock over that of PepsiCo or Coca-Cola. Keurig Dr Pepper's forward P/E ratio stands at about 18.7. Both Coca-Cola and PepsiCo trade at higher multiples.

Despite the lower valuation, Wall Street analysts project higher profit growth for Keurig Dr Pepper. Over the next five years, they forecast the company will increase earnings by an average of 11.16% per year. Its two principal soft drink rivals face estimated growth rates well into the single digits.

Admittedly, both Coca-Cola and PepsiCo offer higher dividend returns than Keurig Dr Pepper, whose annual payout of $0.60 per share yields around 2.3%. With no yearly payout increase streak, Keurig Dr Pepper also lacks the Dividend Aristocrat status of its two peers.

However, this may help Keurig Dr Pepper gain some advantage. The payout ratio, or the percentage of profits going to the dividend, stands at about 44.2% for Keurig Dr Pepper. Coca-Cola and PepsiCo devote approximately 87.5% and 66.9% of their earnings, respectively, to payouts.

With meager profit growth and a dividend aristocrat status to maintain, both Coca-Cola and PepsiCo have become trapped by their dividends. If they abandon their Dividend Aristocrat status, they could face a tremendous loss of confidence and a massive sell-off as funds and income investors abandon their stocks. However, if they maintain the increases, these companies have precious little capital to invest in themselves. They also have no cushion should their profit growth fall further. Conversely, Keurig Dr Pepper's payout ratio leaves the company with approximately 55.8% of its profits to invest in the business or stock buybacks.

Keurig Dr Pepper also appears to stands well-positioned to meet consumer demands. According to data company Kantar, consumers have turned away from "sugary drinks" over the last 30 years.

In fairness, both Coca-Cola and PepsiCo also diversified outside of sodas. However, only 20 of Keurig Dr Pepper's 125 brands are soft drinks. The company also owns multiple coffee brands besides Keurig, along with Evian water and the Snapple line of beverages.

Keurig Dr Pepper may not receive as much attention. However, its ability to maintain better-than-expected earnings growth under today's business conditions is a notable feat.

Moreover, the lower P/E ratio and the double-digit profit growth offer apparent advantages to investors. With the dividend obligations of its two main rivals, Keurig Dr Pepper appears better-positioned to offer a more stable dividend. It also has a greater capability to make the necessary investments needed to remain relevant in the marketplace and maintain earnings growth. These advantages should help the company deliver returns to investors that its main rivals will likely not match.