Please ensure Javascript is enabled for purposes of website accessibility
Log In Help Join The Motley Fool
Free Article Join Over 1 Million Premium Members And Get More In-Depth Stock Guidance and Research
By Will Healy – Updated Apr 28, 2020 at 8:49AM

A temporary viewership bump does not eliminate the company's long-term issues.

Netflix (NFLX 1.39%) has become one of the few stocks to benefit from the COVID-19 crisis. As tens of millions join the ranks of the unemployed, consumers have turned to Netflix as a lockdown leaves people with more time to spend on the streaming video service.

This surge in business has taken this growth stock significantly higher. Moreover, as society opens, and the world slowly returns to work, the trends that drove Netflix higher over the last few weeks could easily reverse themselves. At that point, the previous problems that hurt Netflix stock before COVID-19 will likely return to the forefront.

On the surface, Netflix looks like it is firing on all cylinders. For the first quarter, the company reported profits of $1.57 per share. While that might have missed estimates, it came in more than double $0.76 per share reported in the same quarter last year. Moreover, the $5.768 billion in revenue is a 27.7% increase from the year-ago figure of $4.521 billion.

Furthermore, the company saw an improved cash situation. Thanks in part to a production shutdown amid COVID-19, Netflix reported a non-GAAP free cash flow of $161.609 million. This came as a pleasant surprise as negative cash flow has long dogged the company. Given these improvements, one can see why Netflix stock has risen by almost 30% year-to-date. 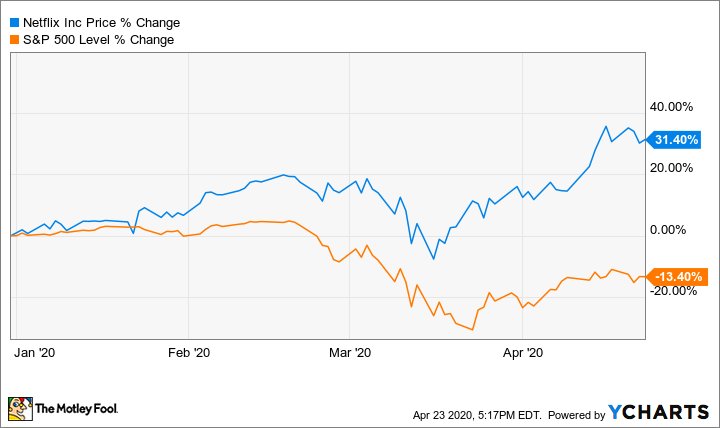 Also, analysts expect that earnings growth will continue. They predict that earnings will grow by 54.7% this year and by an average of about 35.9% per year over the next five years.

Investors also remember that coronavirus did not begin to hurt the economy until mid-March, very late in the first quarter. This indicates that investors may have to wait until the release of the second-quarter numbers to see the full extent of the COVID-19 bump.

Though Netflix has reported positive net income for years, the financial state of the company has continued to worsen. The need to compete with the likes of Disney, Amazon's Prime Video, AT&T's WarnerMedia, and others has led to billions in content spending. While this may widen Netflix's competitive moat, it also comes at a high price. In 2019, the company reported $1.867 billion in net income. However, in that same year, long-term debt rose from $10.360 billion to $14.759 billion.

Debt levels fell to $14.171 billion in the first quarter of 2020. Many had hoped that this would show Netflix had found a way to profit while financing its massive content costs. However, the day after the earnings report, Netflix announced a debt offering of $1 billion worth of dollars and euros. Hence, the recent subscriber bump did nothing to reduce the company's dependence on a growing debtload. 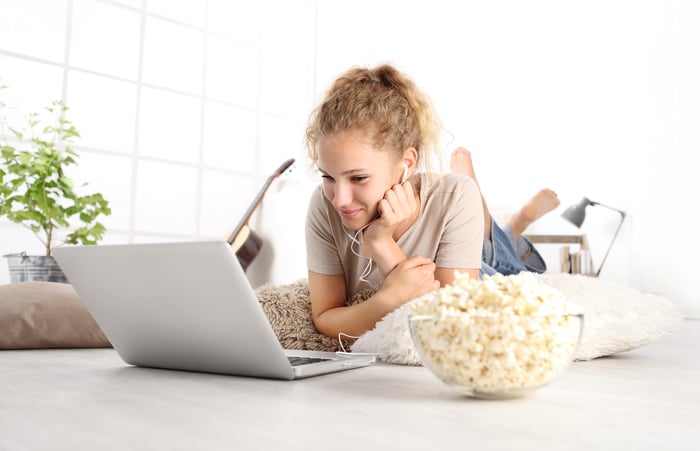 Look for the return of the status quo

Now, as businesses look to reopen across the world, people will probably spend less time on the Netflix platform. Management admitted as much in its report, saying that they expected a decline in viewership and slowing membership growth as home confinement ends.

As this occurs, investors may again take notice of a balance sheet that continues to weaken. Once liabilities are subtracted from assets, Netflix's equity only amounts to $8.409 billion. Not only does that fall short of the amount of long-term debt, but it also grows at a slower pace than debt obligations. This also means at some point, Netflix may have to slow its content spending, even amid increasing competition.

Moreover, with a forward P/E ratio of 69.5, this growth appears priced into the stock. Additionally, that growth probably depends on Netflix maintaining its current pace of spending. If borrowers become increasingly reluctant to loan the company money, profit growth will likely slow along with content creation.

Should this happen, it is unclear how the company could raise more revenue outside of customer growth. The standard plan for Netflix costs $12.99 per month. Other than HBO Now, Netflix prices itself higher than competing services. Disney offers three streaming services for that price, and Amazon also charges less for Prime Video. For this reason, Netflix could also struggle to retain its current fees if the quality of its programming drops.

Netflix has benefited temporarily from COVID-19, and some of that benefit will likely disappear as the world reopens. Still, as long as it can maintain the quality of its content, Netflix should also continue to post impressive profit growth.

However, as its customers return to work, the concerns about rising debt and a deteriorating balance sheet could return to the forefront. Without any further obvious catalysts, Netflix investors have no apparent reason to bid the stock higher.