A key patent win and a plan to reopen its retail stores brought smiles to investors' faces.

Shares of SmileDirectClub (SDC -4.63%) were jumping 17.1% higher as of 11:48 a.m. EDT on Tuesday. The big gain came after the company announced that it had been issued a patent from the U.S. Patent and Trademark Office for its SmileShop concept and process. SmileDirectClub also said that it expects to begin reopening its SmileShop retail stores in May.

The company's new patent should prevent any rival from copying SmileDirectClub's SmileShop model for the next 18 years. This model includes appointment scheduling and confirmation, conducting an intraoral scan at the retail location, creating a treatment plan for using clear aligners, obtaining treatment plan approval from a dental professional, manufacturing the aligners, and shipping the aligners to the customer. 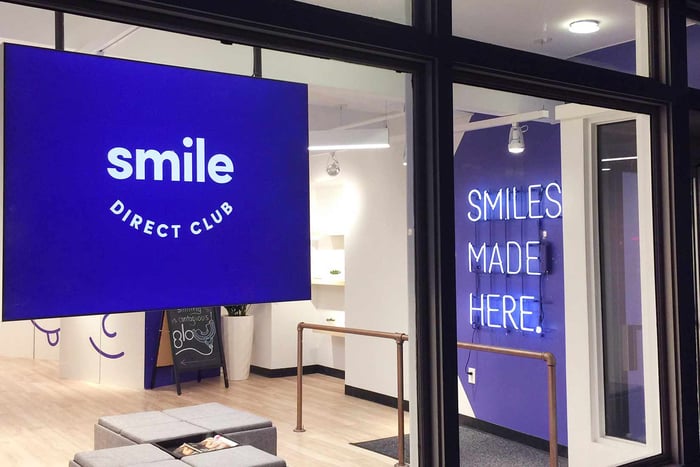 But while SDC really played up its patent victory, the company's plan to reopen its SmileShop stores appears to have been an even bigger catalyst for the healthcare stock today. The competitor most affected by SmileDirectClub's patent win, Align Technology (ALGN -1.00%), also saw its shares jump, although by only around 3%.

SDC's reopening of its SmileShops won't be a quick process. The company said that it will "slowly reopen" the stores as local governments lift restrictions on business operations. CEO David Katzman said, "We look forward to welcoming customers back to our SmileShops at the earliest and safest possible time."

It remains to be seen whether customers will return to SDC's SmileShops in large numbers even when the retail locations reopen. However, the news that operations will soon begin to return to normal is certainly positive for SDC. The company's new patent could also limit Align Technology to some extent as it seeks to expand its retail presence in the future.