Please ensure Javascript is enabled for purposes of website accessibility
Log In Help Join The Motley Fool
Free Article Join Over 1 Million Premium Members And Get More In-Depth Stock Guidance and Research
By Dan Caplinger - Apr 29, 2020 at 8:27AM

The restaurant chain has stayed resilient in the face of the coronavirus, but can the good times last?

When most investors think about high-growth stocks, their first impulse is to look to innovative young technology companies offering the latest cutting-edge capabilities. Yet the stock market doesn't always behave the way investors might think they should. Outperforming just about every major tech company over the past 10 years is a business that might seem about as simple as you can imagine: Domino's Pizza (DPZ -0.40%).

Domino's stock has jumped almost 2,200% in the past decade, and perhaps even more remarkably, it's up 22% so far in 2020. Given the bear market that the coronavirus pandemic brought on, posting any gain at all is noteworthy. As one of the only restaurant businesses to keep operating during the health crisis, Domino's deserves a lot of credit. But after its strong performance, does it always deserve your investing dollars? Here, we'll take a closer look at what's happened with Domino's and whether it's a buy right now. 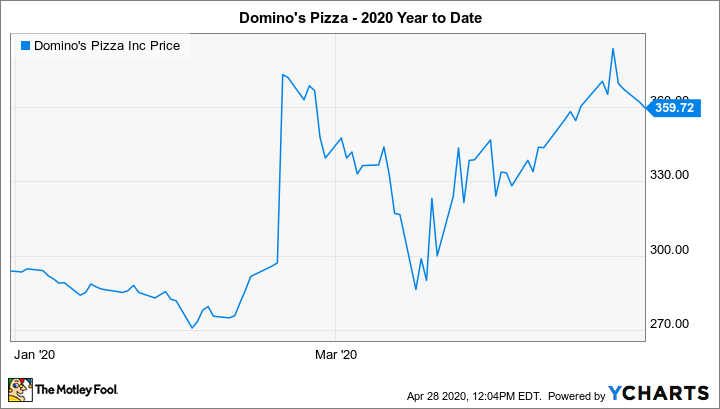 A huge turnaround for Domino's

Domino's has been in the pizza business for more than half a century, but it got off to a lackluster start as a publicly traded stock in the mid-2000s. At the time, customers turned to Domino's largely for convenience and price, but they didn't have high expectations for the quality of the food offerings they got. Repeatedly, Domino's ranked near the bottom of consumer surveys of national pizza chains.

To turn things around, Domino's questioned everything about its business. It revamped its menu and changed its recipes. It incorporated technology into its operations, offering delivery trackers and being early to embrace mobile ordering. It even made fun of itself in its marketing efforts, acknowledging the criticism it had gotten early in its history and actively looking for ways to change things. Even when those measures were costly, former CEO Patrick Doyle and his team didn't hesitate to move forward.

The result was an explosion in the number of stores Domino's has. That boosted earnings, creating a positive feedback loop that sent the stock price soaring. 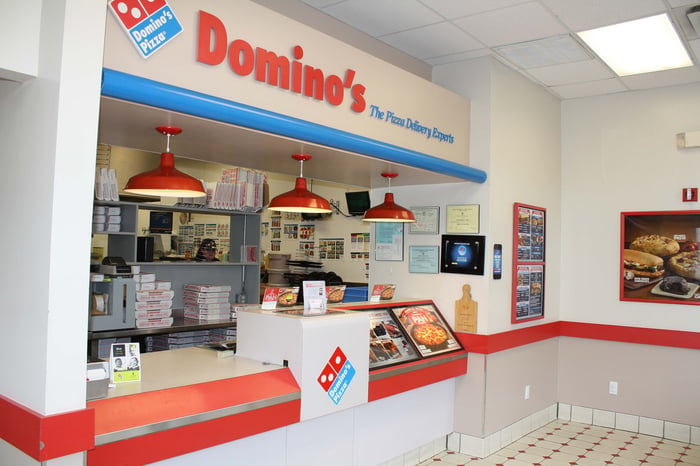 More recently, Domino's has been able to keep itself open during a pandemic that has crushed the restaurant industry. With lockdown provisions forcing many restaurants to close to those who would ordinarily dine in, delivery and pickup has become the name of the game, and that plays to Domino's strengths.

In Domino's most recent quarterly report, that competitive advantage showed itself quite clearly. Retail sales were up nearly 6% excluding currency effects on a 1.6% gain in same-store sales in the U.S., and earnings jumped 40% year over year on a per-share basis. CEO Ritch Allison highlighted the strong financial position Domino's is in, despite what he called "a time of unprecedented change in our industry."

That said, Domino's still faces challenges. The restaurant chain has seen big drops in sales in areas where restrictions on its operating hours and service methods have forced changes to its usual operations. With many major colleges and universities having closed their doors and gone to remote learning alternatives, for instance, locations that relied on student traffic have seen significant shifts. Similarly, foreign countries that have taken more aggressive steps to fight the coronavirus have hurt Domino's sales, although more demand from those who might have dined elsewhere has offset those declines.

Domino's has withdrawn its guidance for 2020, citing too much uncertainty due to the coronavirus outbreak. Yet from a corporate standpoint, Domino's has financial resources to help it deal with any disruptions it might face in the future, and it remains committed to giving its customers satisfaction in as many areas as it can. From ease of ordering to better food, the pizza chain stands out among its restaurant peers.

Few would argue that stock is inexpensive, especially given the likely slowdown in growth that will come with deteriorating economic conditions. Yet for those looking for a growth stock in the restaurant industry, it's hard to find a company doing more things right than Domino's right now. That makes it worth a closer look from investors.