With a looming recession and record unemployment, people may skip out on lunchtime burritos.

Chipotle Mexican Grill's (CMG -1.95%) results have been steadily improving since CEO Brian Niccol took over in early 2018. His "back-to-the-basics" approach has driven healthy revenue growth, record digital ordering, and an enviable balance sheet. The stock is close to all-time highs when nothing is even close to normal.

Let's dive into what's going right and the stock's valuation before looking at how the economic recovery might impact near-term growth.

A great quarter for burritos

Chipotle's impressive first-quarter results are the culmination of several years of focused efforts under a new CEO and management team. Although average store revenue is still 12% off its 2015 peak, the company is firing on all cylinders. In its most recent quarter, the company posted 7.8% top-line growth, a 3.3% increase in same-store sales, and record digital sales at 26.3% of revenue. More importantly, management is moving to take care of all its stakeholders. 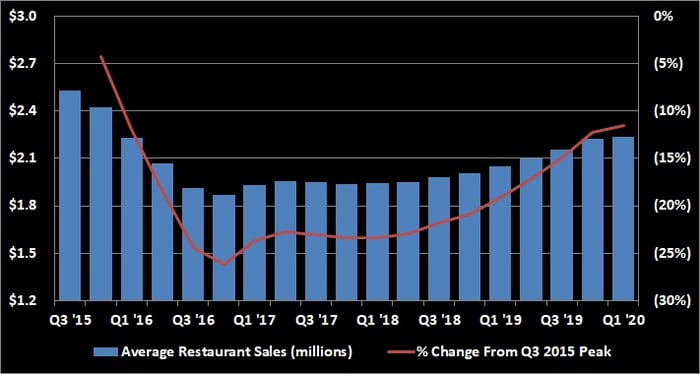 Employee benefits typically include paid sick leave, free meals, and debt-free degrees, but during the coronavirus outbreak, the company has increased pay 10% for those working, paid out the discretionary bonuses scheduled for the first quarter, and increased emergency benefits for those affected directly by COVID-19. For customers, all but 100 stores have stayed open for take-out and online orders, the company has inked a new delivery partnership with Uber Eats, and it's offering free delivery through mid-May. Lastly, the company has stopped its share buybacks and new store construction to conserve its $909 million in cash and short-term investments.

The quarterly results and management's actions were cheered by the market and have boosted the stock to within 6% of its all-time high, which is also driving the valuation higher.

The price of success

Growth stocks are often valued at a premium, and Chipotle is no exception. Compared with its restaurant peers, Domino's Pizza and McDonald's, the burrito specialist’s price-to-sales ratio of 4.4 is similar to the pizza maker’s 4.1, but lower than the burger-giant’s 6.8. But, the price-to-earnings ratio (P/E) presents a stark difference. The burrito maker’s trailing P/E ratio of 73 is twice that of Domino’s and 3 times McDonald’s. 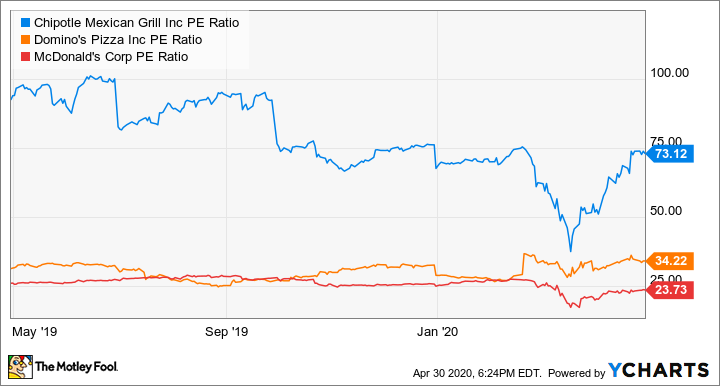 This is not surprising given the low single-digit growth rates of the pizza and burger chain versus Chipotle's double-digit growth in the last five out of six quarters. But these kinds of premiums are reserved for growth stocks, and it's not clear when Chipotle will post growth numbers again.

During the most recent earnings call, the management team openly discussed the impact of the coronavirus. Year-over-year comparable-store sales dropped to negative 35% for the week ended March 29 but have recovered to the negative high-teens range. At that rate, CFO Jack Hartung indicated it could post a breakeven EBITDA number if it cut its capital spending to zero. At a 30% to 35% decline, individual stores could break even, and its cash and cash equivalents would be able to sustain operations for more than a year.

In response to a question about when it would get back to peak average store sales, Niccol responded: "[It] is going to be driven very much about when the economy gets reopened so that people can start experiencing dining rooms and the full access of restaurants. But it looks like that's going to start loosening up here over the next month or two." 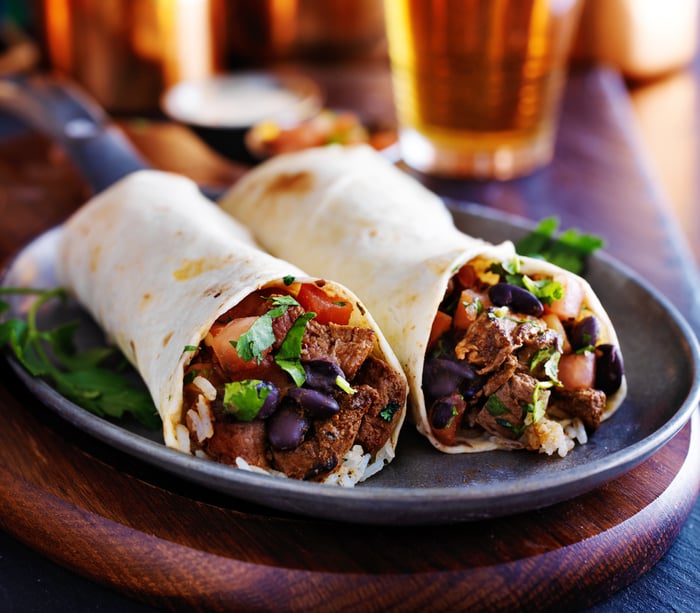 The problem is no one knows how long the economic recovery will take. As of April 23, the labor department indicated that over 26 million Americans have filed for unemployment. This figure is almost triple the nine million jobs that were lost during the 2008 and 2009 financial crisis. As states restart their economic engines, not everyone will be able to go back to work right away. A recent survey of economists by the Wall Street Journal indicated it would take 27 months for employment to get back to its Feb. 2020 level.

With a seemingly inevitable recession and an extended period of high unemployment, it may be more than a year before Chipotle posts quarterly growth numbers and even longer before it could reach its 2015 average store revenue peak.

Niccol and his management team have done an amazing job getting this restaurant's financial engine humming again. Its record cash hoard, digital online ordering capabilities, and strong store operations have prepared it for this pandemic and for thriving afterward. But in the meantime, it's likely that this stock (and the market) will be volatile until things get back to normal again.

Note: My ownership of Chipotle stock is through a UTMA account for my son. I don't personally hold shares.

Correction: In the section labeled "The price of success," price-to-sales and price-to-earnings ratios and the chart have been corrected from the original version.