Please ensure Javascript is enabled for purposes of website accessibility
Log In Help Join The Motley Fool
Free Article Join Over 1 Million Premium Members And Get More In-Depth Stock Guidance and Research
By Dave Kovaleski - Apr 30, 2020 at 10:37AM

The Hartford Financial Services Group (HIG 1.24%) reported its first-quarter financial results Thursday after the close, and the numbers were a mixed bag -- the insurer's net income fell, but it did beat analysts' consensus estimate.

Net income was down 57% in the quarter to $268 million, with earnings per share at $0.74. Core earnings, which the company uses to gauge operating performance, was down 4% year over year to $485 million, or $1.34 per share, but beat estimates. 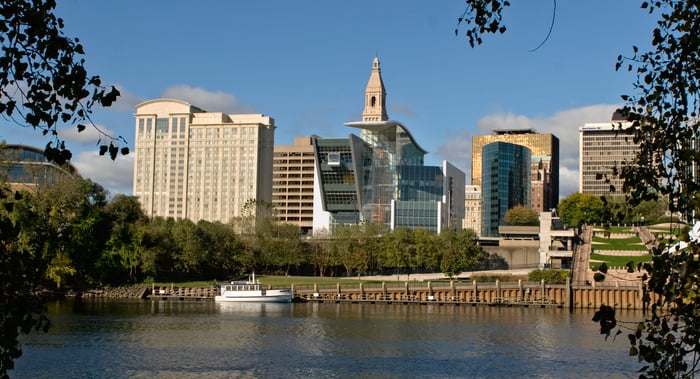 The core earnings metric excludes various non-recurring items such as certain realized capital gains and losses, and integration and transaction costs for an acquired business. The Hartford purchased The Navigators Group, an underwriter, last year.

Core earnings in the insurer's commercial business lines sank 4% year over year to $262 million, but in the personal lines business, they rose 43% to $117 million. In the group benefits business, they were down 6% to $115 million.

"We entered 2020 in a position of strength, focused on execution to build on the momentum in our businesses. In the first quarter we generated an industry leading 12-month ROE on core earnings of 13.3%," said Chairman and CEO Christopher Swift.

The company's combined ratio rose 3 points from a year ago to 99 in the business lines and dropped 6.5 points in the personal lines to 86.7. A combined ratio under 100 shows means the company is taking in more in premiums than its paying out.

Hartford's stock price rallied by about 15% over the past five days, but was trading lower Friday morning, in the $40.50 range. Shares remain down by about 33% year to date.