Please ensure Javascript is enabled for purposes of website accessibility
Log In Help Join The Motley Fool
Free Article Join Over 1 Million Premium Members And Get More In-Depth Stock Guidance and Research
By Howard Smith - May 1, 2020 at 11:09AM

The automakers are working with the UAW to forge a framework to safely reopen suspended operations.

Ford Motor Co. (F 0.75%) has released an outline of its plan to restart its shuttered U.S. factories, while General Motors (GM 0.83%) has similar plans under way for its plants, according to a CNN report. Ford says it is using its experience from around the world where work has already resumed, as well as from the plants in the U.S. that have been working to make medical equipment needed in the fight against the COVID-19 pandemic.

GM showed off its Kokomo, Indiana facility to Vice President Mike Pence yesterday, where it has been making ventilators in conjunction with Ventec Life Systems. The automakers are using the new practices as a foundation for resuming auto manufacturing at their facilities. Restart dates have not been announced, but it's been reported that both are eyeing mid-May as the potential timeframe. 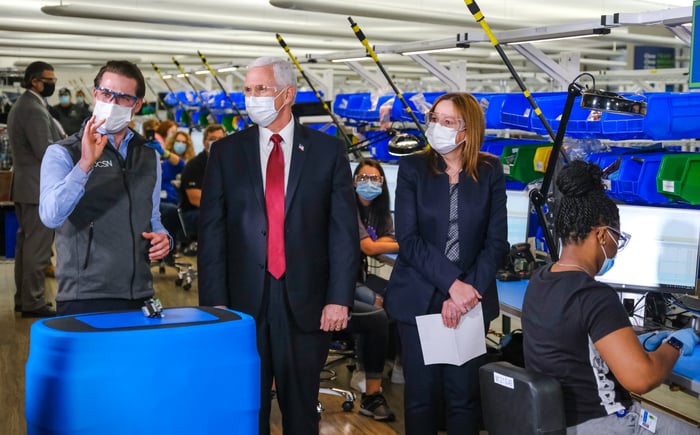 Some of the practices that Ford said it has implemented globally include "health assessment measures, personal protective equipment and facility modifications to increase social distancing." Ford Chief Operating Officer Jim Farley said that the global experience where plants have been operating for both auto and medical device work has shown it can safely manufacture with employees wearing personal protective equipment (PPE) like masks and face shields, as well as maintaining a minimum of six foot spacing between employees "wherever possible."

Ford also said it was collaborating with unions, including the UAW, "on initiatives to keep people safe, including completing daily health self-certifications, scanning temperatures and more."