Please ensure Javascript is enabled for purposes of website accessibility
Log In Help Join The Motley Fool
Free Article Join Over 1 Million Premium Members And Get More In-Depth Stock Guidance and Research
By Jim Halley - May 1, 2020 at 6:43AM

Bristol Myers Squibb, Cardinal Health, and McKesson are all underpriced.

It's scary out there right now for investors, with wild market swings and a lot of negative news coming out of quarterly reports. There is one sector, however, that will survive and likely thrive despite the coronavirus pandemic shutdown -- healthcare. That said, investors shouldn't head for just any healthcare stock; some have been hit harder than others by the shutdown. Look for big, consistent healthcare companies with long-term growth and solid dividends. Here are three that I like.

If you don't know about McKesson, you should

McKesson Corp. (MCK 1.63%), a healthcare services company headquartered in Irving, Texas, with more than 80,000 employees, was founded in 1833. The company actually thrived during the Great Depression, so a little pandemic looks like no big deal.

The company's third-quarter revenue was $59.2 billion, up 5% from a year ago; yearly revenue totaled $214.3 billion, an increase of 2.9%. McKesson has been the prime pharmaceutical vendor for the U.S. Department of Veteran Affairs for 15 years, and it's sitting on $2.1 billion in cash, so it is protected against any short-term market headwinds. The stock is trading well below its 52-week high of $172.18, set on Feb. 21, so it's still a good time to buy. 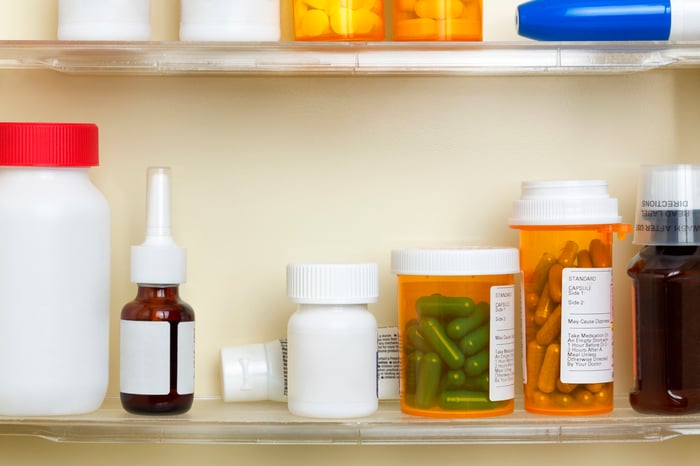 The company says it delivered one-third of all prescription medicine in the United States last year, and it's been a favored partner with federal agencies in delivering medical supplies during the pandemic. The only downside for me is its annualized yield, which is currently just 1.17%, well below the S&P 500 average of 2%, but its impressive history and cash hoard make up for it.

Cardinal Health is a big ship to ride out the storm

Cardinal Health (CAH 1.62%), a healthcare services company with 50,000 employees that's headquartered in Dublin, Ohio, is one of the most successful companies you may not have heard of. Last year, Cardinal pulled in revenue of $145.5 billion, up 6% over the prior year. The company's second-quarter earnings, reported Feb. 6, showed a 5% rise in revenue compared with the same quarter in 2019; most of that increase came from the company's pharmaceutical division.

Its overall profit did take a hit last quarter because of recalls involving its surgical gowns, something the company addressed in detail in its second-quarter report. It bounced back quickly from its 52-week low of $39.05 in March but is still priced well below its 52-week high of $60.69 in February. Like McKesson, Cardinal has benefited as a favored partner with federal agencies during the pandemic. That's on top of a $2.25 billion, 30-month contract with the Department of Defense that it landed in November.

Cardinal Health's growth is steady, and with an annualized dividend yield of 3.74%, it's particularly attractive for long-term investors. The company has raised its dividend for 15 consecutive years, to a current level of $0.48 per share.

Many, many companies are looking to cut dividends because of falling profits due to the shutdown. Rest assured that Bristol Myers Squibb (BMY -1.77%) isn't one of them. The company's payout ratio is a healthy 29.5%, with a yield of 2.8%.

That's sustainable because the New York-based pharmaceutical company is a profit machine. It earned $26.1 billion last year, a jump of 16% over the previous year. The results were made even stronger by its $74 billion purchase of Celgene, which deepened Bristol Myers Squibb's oncology pipeline.

The company's biggest seller is Eliquis, a drug which treats atrial fibrillation. Eliquis earned the company $7.9 billion in sales last year, a year-over-year increase of 23%. Close behind is Hodgkin lymphoma drug Opdivo, which earned $7.2 billion, 7% better than last year. The fastest riser in the pipeline is Empliciti, used to treat relapsed multiple myeloma (a form of blood cancer), which saw sales rise 45% year-over-year to $357 million.

The first new drug to come out of the Celgene deal is Zeposia, which received approval from the Food and Drug Administration on March 26 to be used to treat relapsing forms of multiple sclerosis.

They might all fit your portfolio, but which one makes the most sense?

As usual, it depends on what you're looking for. If it's purely safety, McKesson is a good bet because it is too big and too well-connected to struggle for long. The yield on its dividend is the lowest of the group, however.

Cardinal Health has the best yield, and like McKesson, it may be strongly positioned to come out of the pandemic with few problems.

Bristol Myers Squibb is another solid choice, both for its yield and its upside, which may be the greatest of the three over the next year thanks to its promising pipeline.