Please ensure Javascript is enabled for purposes of website accessibility
Log In Help Join The Motley Fool
Free Article Join Over 1 Million Premium Members And Get More In-Depth Stock Guidance and Research
By Aditya Raghunath - May 2, 2020 at 2:35AM

Is one technology heavyweight a better long-term investment?

In fact, Adobe and Shopify are two stocks that have crushed market returns over the years. Since Shopify stock went public on May 21, 2015, it has returned a monstrous 2,340%. Adobe also easily outperformed the broader markets since May 2015, with returns of 323%. 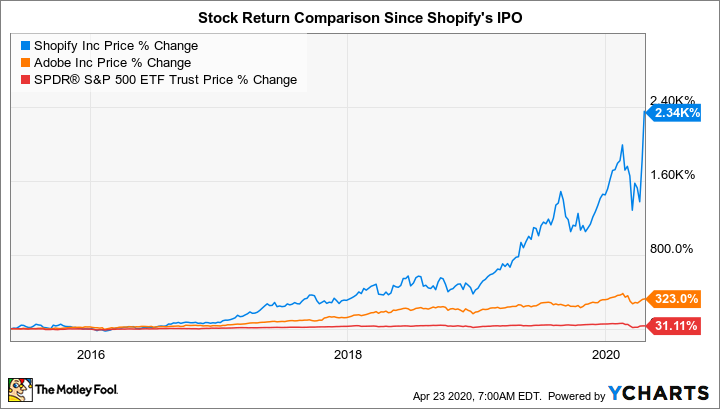 But past performance is no guarantee for future gains. Investors need to take a fresh look at these companies and dive into business fundamentals to make an informed decision about which is the better buy, or if there is a better buy.

Shopify has managed to grow sales at an astonishing rate over the years, driven by an increase in customers. The company's revenue rose from $205.2 million in 2015 to $1.58 billion in 2019, an annual growth rate of 66.6%. However, this growth is decelerating as Shopify's business matures. In 2017, Shopify increased sales by 73%. Sales growth stood at 59% in 2018 and 47% in 2019. Despite a slowing growth rate, Shopify remains a promising business.

During the pandemic, Shopify is likely to perform better than companies in other sectors as businesses are closed and customers have no option but to shop online. While the e-commerce trend is accelerating due to the COVID-19, it is here to stay, making Shopify a solid pick for long-term investors.

A recession would lower consumer spending, and that would be bad for Shopify's customers, but right now Shopify is aiming to help its merchants via various initiatives that include offering short-term liquidity through programs such as Shopify Capital cash advances. 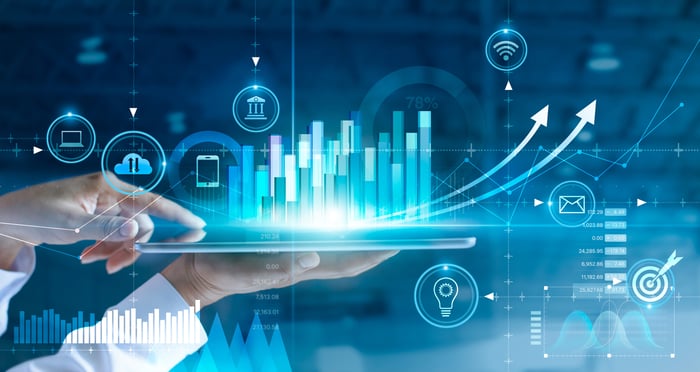 Shopify recently announced that it would report revenue and adjusted operating income for the first quarter within or above its guidance. Shopify is scheduled to report quarterly results on May 6. During the last earnings call, Shopify estimated first-quarter sales between $440 million and $446 million, which is 43% above sales of $310 million in the prior-year quarter. However, Shopify revoked guidance for the rest of 2020.

It is possible that Shopify merchants experienced regular demand for most of Q1 as the lockdown rules in North America were imposed around mid-March. There is no certainty when these lockdowns will be relaxed. The growing ambiguity has led to Shopify and several other companies revoking revenue guidance for the rest of the year.

Shopify's subscription revenue currently accounts for 41% of total sales and it is a high-margin business. In 2019, the subscription business accounted for 59.4% of total gross profit and ended the year with a gross margin of 80%. Subscription sales will help the company offset weakness in an economic downturn with a steady stream of recurring revenue.

Last year, Shopify announced that it will pump in a billion dollars over the next five years to set up a network of fulfillment centers. This should drive merchant engagement higher as it is a service provided by Shopify that will help sellers streamline operations.

Shopify's key revenue driver has been the expansion of its merchant base. The company now has over a million merchants on its platform, up from 165,000 in 2015.

One report expects online sales to account for 16% of total retail sales in 2023, up from 11% in 2019. The COVID-19 pandemic might accelerate this trend and drive online shopping's market share higher in the upcoming decade. This indicates Shopify's merchant base may grow at a robust rate in the next few years.

Adobe is an established software player with a dominating presence and a robust product portfolio. Its Photoshop software is a household name and is considered a top-quality product by industry users.

Adobe is also transitioning to a subscription-based model where consumers pay a monthly fee to access a suite of company products. In the fiscal year 2019, Adobe generated $10 billion in sales from subscriptions, accounting for 89% of total sales -- up from 88% in 2018 and 84% in 2017.

Adobe increased sales by 19% in its most recent quarter, and it continues to grow at a good rate. Adobe's primary business segment is digital media, which grew by 22% year over year in the quarter ended in February. Annual recurring revenue in this business was up 5% quarter over quarter to $8.73 billion, an impressive growth figure for a large segment.

Adobe expects a slowdown in new bookings, as well as lower marketing spend and a delay in consulting services by enterprise customers. Despite the ongoing impact of the COVID-19 pandemic, Adobe estimates sales of $3.175 billion in the fiscal second quarter of 2020, indicating year-over-year growth of 16%. Adjusted earnings per share are estimated at $2.35, which is 29% above earnings of $1.83 in the prior-year period.

Adobe has been one of the leading digital media software players in the last decade. Adobe transitioned to a software-as-a-service business model a few years back, which, again, ensures predictable cash flows. When users learn software, they spend a considerable amount of time in training. This results in customers being reluctant to leave the product. Adobe's industry-standard products and high subscription sales make it an attractive bet for investors.

Shopify and Adobe are trading at expensive valuations

Both Shopify and Adobe expect the COVID-19 pandemic to impact top-line growth in 2020. Due to the rise in stock price, the two stocks trade at a higher valuation. Growth companies that trade at nosebleed valuations generally underperform broader markets in a sell-off.

Adobe has a market cap of $162 billion. Its forward price-to-sales ratio stands at 12.5 and its forward-price-to earnings multiple is 34.5.

Comparatively, the S&P 500 has a forward P/E multiple of 16. One could argue that Shopify and Adobe are growing at far greater rates than the overall market and deserve a high valuation. Investors and analysts have historically been wary of Shopify's high valuation metrics. But the stock continues to touch record highs.

Adobe and Shopify are better poised than most to handle a downturn because of their subscription-based business models. The e-commerce market continues to expand and businesses should invest heavily in digital transformation in the upcoming decade.

It is difficult to pick a winner between these two. Any major correction in the two should be viewed as a buying opportunity. I would suggest investing in both these companies to benefit from capital appreciation and the potential to create massive long-term wealth due to their expanding addressable markets and market-beating growth metrics.