Please ensure Javascript is enabled for purposes of website accessibility
Log In Help Join The Motley Fool
Free Article Join Over 1 Million Premium Members And Get More In-Depth Stock Guidance and Research
By Adria Cimino – May 3, 2020 at 2:08PM

Have lockdowns weighed on Beyond Meat’s restaurant and foodservice business?

At first glance, Beyond Meat (BYND -1.80%) may not seem like the sort of company to suffer during the coronavirus outbreak. The maker of plant-based meat alternatives sells its products in supermarkets, where consumers have been stocking up on essentials since the outbreak deepened in the U.S. Though basics like canned goods and cleaning products may top shopping lists, we can imagine Beyond Meat's plant-based burgers getting a little boost as well.

As we wait for the company's first-quarter earnings report on May 5, my short-term concern is what may have happened to Beyond Meat's restaurant and foodservice segment. (More about my long-term concern later.) In the fourth quarter of last year, that business generated about 59% of Beyond Meat's revenue. You can find Beyond Meat's products at more than 60 restaurant and foodservice locations -- including big names like Dunkin' and TGI Fridays as well as on the campuses of Harvard University and Virginia Tech. 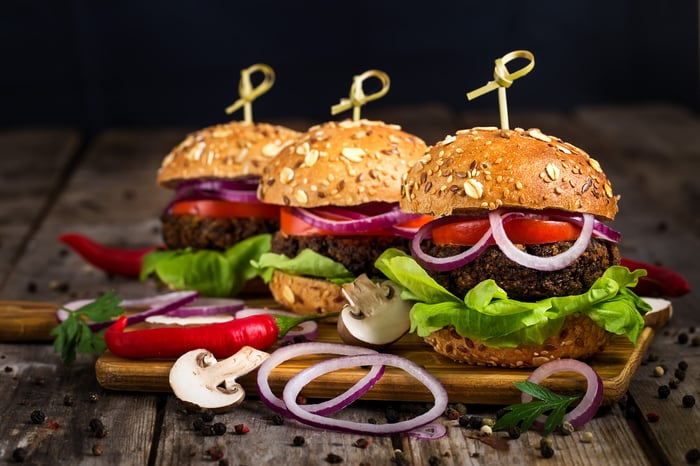 The coronavirus outbreak escalated during March and April in the U.S., forcing restaurants to move to a to-go model. And university campuses have emptied as the schools switched temporarily to online learning.

Consumers continue to visit restaurants for takeout, but the change is weighing on the amount of business most restaurants would have in normal times for three reasons. Some people choose to dine out for the experience, so they may reduce their restaurant trips during the lockdown. Others may prefer staying home to avoid even minimal social contact. And finally, many Americans have lost their jobs and may have reduced spending on extras like dining out.

All of this represents a threat to Beyond Meat's restaurant and foodservice revenue. And the threat may linger in the months ahead. The U.S. economy has weakened, and weekly U.S. unemployment claims reached a record high last month.

In addition to possible declines in restaurant and foodservice revenue, there may be pressure on sales in grocery stores. The higher prices of Beyond Meat's products may lead some consumers, hurt by the economic slowdown, to opt for less expensive alternatives. For example, a 1-pound package of the company's plant-based ground beef costs $8.99 at Target, while Pure Farmland's competing product sells for $5.99. That said, any shortages in traditional meats may lead consumers to opt for Beyond Meat's plant-based alternatives.

Rivals are adding up

Now here's that long-term concern I hinted about earlier, which is the main reason I'm hesitant about buying shares of Beyond Meat. Although the company is the market leader and wowed investors with a whopping 239% increase in revenue last year, I'm concerned about its ability to keep up this amazing growth pace. Rivals have been adding up, including former Beyond Meat investor Tyson Foods and food industry heavyweights Perdue Foods, Nestle, and Kellogg. Furthermore, Impossible Foods recently told CNBC that its plant-based meat will soon be available in about 1,000 grocery stores.

With all of the competition out there, prices for these products may come down. If Beyond Meat reduces its prices to remain competitive, its margins could suffer. On the other hand, if Beyond Meat's prices remain higher than those of its rivals, the company could lose on volume as consumers opt for the less expensive alternatives.

It's possible that consumers will choose to pay more for Beyond Meat's product because they prefer the taste compared to that of other brands. Beyond Meat also may be able to reduce its costs in the future and compete on price. So far, however, the focus has been on innovation, and that has a cost. In the fourth quarter, research and development expenses jumped 80% year over year. Even considering these scenarios, I still say competition represents a threat for Beyond Meat over time.

Beyond Meat's shares have climbed more than 20% year to date.  We may see some short-term weakness due to the impact of coronavirus and the economic downturn. However, if the economy recovers sooner rather than later, there could be more growth ahead for Beyond Meat's restaurant and retail businesses -- and the shares may benefit. Nevertheless, for the long term, pricing power remains a real issue that holds me back from investing in this stock.