Please ensure Javascript is enabled for purposes of website accessibility
Log In Help Join The Motley Fool
Free Article Join Over 1 Million Premium Members And Get More In-Depth Stock Guidance and Research
By Rachel Warren – May 3, 2020 at 7:37AM

Here's why you may want to think twice before scooping up shares.

If you've been tracking Rite Aid (RAD -0.99%) in recent weeks, you may have noticed an alarming trend. While its competitor Walgreens Boots Alliance (WBA -1.47%) remained a relatively attractive value stock in April as stocks rebounded out of the worst market plunge since the Great Recession, Rite Aid has been all over the map. But well before the coronavirus bear market, investors were concerned about Rite Aid's waning growth indicators.

The company's revenue plunged significantly in the 2018 fiscal year, and things just haven't been the same since. It didn't help matters when a much-anticipated merger with Walgreens came to a screeching halt in 2017, followed by another failed merger with grocery retailer Albertsons in 2018. 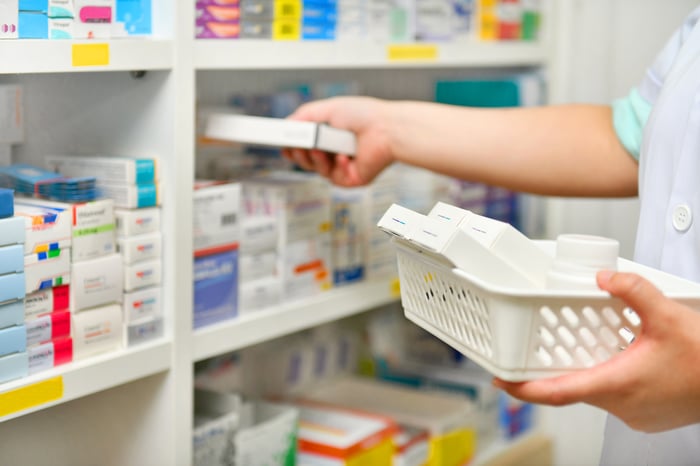 If the cheap price has led you to consider scooping up some shares, here's why you may want to think twice (or even thrice) before you buy.

Investors had been anticipating Rite Aid's Q4 2020 and full-year results, which it released before the market opened on April 16. Unfortunately, the update wasn't one to rejoice over, and the stock took a 20% nosedive in response.

Rite Aid reported a quarterly net loss from continuing operations totaling roughly $344 million at the end of the fiscal year 2020, under generally accepted accounting principles (GAAP). This represented a net loss of $6.43 per share. By comparison, the company reported a GAAP net loss of approximately $266 million in Q4 of fiscal 2019, or $4.83 per share.

There were some positive glimmers in Rite Aid's earnings report. Total revenue rose very slightly on a year-over-year basis, to $5.73 billion from $5.38 billion in Q4 2019. This was largely due to the company's revenue boost in the pharmacy services segment from about 244,000 new Medicare Part D memberships, which totaled just less than $2 billion in sales in the last quarter of fiscal 2020. Overall, pharmacy services earnings rose by 23% from the year before.

The retail pharmacy segment had a very small revenue increase in Q4, up 0.6% year over year, with sales for the division adding up to just under $4 billion.

Rite Aid said the coronavirus pandemic hasn't severely affected its outlook for fiscal 2021. However, the company did emphasize the following in its most recent quarterly report:

It is important to note that the impacts of COVID-19 on our business are fluid and difficult to predict and these estimates could materially change. Factors that could cause our estimates for fiscal 2021 to materially change include a deterioration in front-end sales and prescriptions due to prolonged social distancing measures, a reduction in members at our Pharmacy Services Segment commercial clients and disruptions to our front-end or pharmaceutical supply chain.

As of right now, the company still projects full-year fiscal 2021 earnings to fall somewhere between $22.5 billion and $22.9 billion, with expected net losses as high as $119 million.

Struggling to hold its own against the competition

It's no secret that the retail pharmacy industry has taken a big hit in recent years, particularly with increased competition from giants like Amazon.com leaping into the online pharmacy marketplace. But some pharmacy stocks are weathering the storm than others.

Walgreens reported $36 billion in sales in the second quarter and a year-over-year rise in revenue of just less than 4% in its recent April earnings report.In 2017, after Rite Aid's proposed deal with Walgreens fell through, the former sold the latter more than 2,000 of its stores in a $5.2 billion transaction. Rite Aid now has about 2,500 locations nationwide, compared with Walgreens's 9,277. Rite Aid primarily used the proceeds of the transaction to pay off its debt obligations at the time, resulting in little impact on its overall revenue but giving a nice boost to Walgreen's pharmacy retail.

CVS Health (CVS -1.48%) is another competitor that has been giving Rite Aid a run for its money. CVS had an incredibly profitable 2019 that exceeded analysts' projections, with cash flow totaling $13 billion and annual revenue increasing 32% year-over-year to $257 billion.The company has also been able to carve out a unique, competitive path for itself in the healthcare market since its acquisition of Aetna health insurance in 2018.

It doesn't take a long look at Rite Aid's quarterly and full-year growth story to realize that it leaves more than a little to be desired. Dwindling front-end sales have affected gross revenue, and so far the only saving grace has been its Medicare Part D membership and strategic growth initiatives (including the effort to expand its pharmacy benefits and services subsidiary, EnvisionRxOptions).

Rite Aid has tried to position itself at the forefront of COVID-19 testing efforts in its partnership with the U.S. Department of Health and Human Services. As of the end of April, the company had opened 25 self-swab testing sites in eight states: Delaware, Idaho, Michigan, New York, New Jersey, Ohio, Pennsylvania, and Virginia. These tests are provided free of charge to individuals who meet the criteria for testing, which includes people 18 and up who are displaying symptoms such as fever, difficulty breathing, and loss of taste or smell.

But will these efforts be enough?

It doesn't look like the company is expecting any significant improvements to its top and bottom lines in fiscal 2021. And while Rite Aid's growing number of testing sites is part of a much broader effort to make COVID-19 tests more readily available to the general public, these developments won't play much of a part in the company's net revenue over the next fiscal year. In its prior guidance for fiscal 2021, which it issued in March, Rite Aid maintained that it would continue to see a dip in prescription drug reimbursement rates in line with the downward trend encountered in fiscal 2020. In Rite Aid's most recent Q4 results, it expanded on the fiscal year 2021 predictions, noting that "based upon conditions in the generic drug market, the company does not expect to be able to as effectively offset these declines with generic drug purchasing savings as in the prior year."

Look beyond its cheap price

A quick glance at Rite Aid's stock may give the impression of a cheap investment opportunity. But price is not always an indicator of a good investment.

If you already have Rite Aid stock in your portfolio, you're likely better off holding on to it rather than selling at a loss. But if you're thinking about investing in it, be prepared for more than a few volatile bumps along the way. I would instead keep an eye on a more reliable buying opportunity, such as Walgreens. That company has an attractive 4.4% dividend yield and has been weathering the coronavirus storm well after a solid 2019. As for Rite Aid stock, long-term growth investors should focus elsewhere in my opinion.