Please ensure Javascript is enabled for purposes of website accessibility
Log In Help Join The Motley Fool
Free Article Join Over 1 Million Premium Members And Get More In-Depth Stock Guidance and Research
By Donna Fuscaldo – May 4, 2020 at 2:39PM

The new 13-inch MacBook Pro comes equipped with Apple's Magic Keyboard and double the storage of the previous generation.

Apple (AAPL -3.11%) is continuing its streak of launching new products amid the COVID-19 pandemic, announcing a new 13-inch MacBook Pro.

In a press release, the iPhone maker said the 13-inch MacBook Pro now comes equipped with Apple's new Magic Keyboard. It also runs on Apple's 10th generation processors, which it says gives users up to 80% speedier graphics performance. Apple also increased the storage on the device to 256GB for the base model. That is twice the storage customers got from the previous generation of 13-inch MacBook Pros. Customers can get as much as 1TB of storage if they desire. 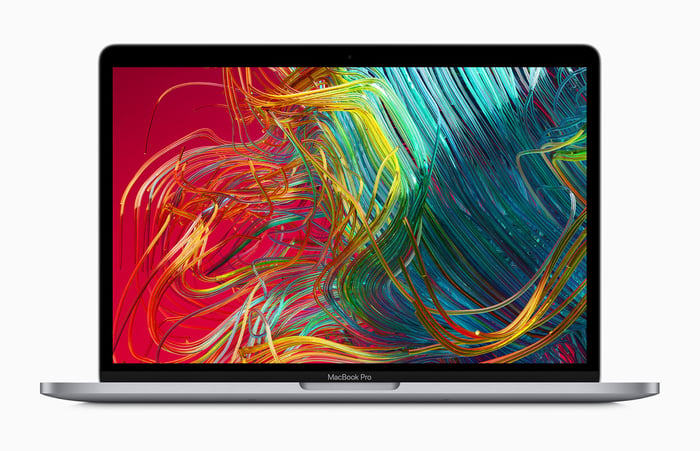 The MacBook Pro is available to order on Apple.com as of today and is priced at $1,299 for consumers and $1,199 for the education market. The 13-inch MacBook Pro will land in stores later this week.

"With these updates, our entire notebook lineup features the Magic Keyboard for the best typing experience ever on a Mac notebook, offers twice the standard storage than before, and delivers even more performance," said Tom Boger, Apple's senior director of Mac and iPad product marketing in a press release.

The 13-inch MacBook Pro is the latest product the tech stock has rolled out during the pandemic. Despite disruptions in the supply chain and employees forced to work from home, Apple has proven it can continue to innovate and deliver.

In March, just as shelter in place orders were going into effect in the U.S. Apple unveiled a new iPad Pro, which it said is the most advanced iPad Pro to hit the market. Then in April, it announced the much-rumored second-generation iPhone SE, a 4.7 inch iPhone that's priced at $399. It's not clear if Apple will be so lucky with its 5G iPhone. That's expected in the fall but with the pandemic still spreading, it's not clear if Apple will meet that timeframe or delay the launch.