Over the past decade, many immunotherapies have been investigated for the treatment of cancer, with limited success. Will Compugen (NASDAQ:CGEN) become yet another casualty in an endless uphill battle?

Compugen claims a key competitive advantage: proprietary algorithms it can use to detect specific sequences within protein receptors that regulate the immune system and inhibit their activity. Normally, these receptors prevent T-cells in the body from attacking healthy tissues. Cancer cells, however, are known to evade detection by the body's own immune system by posing as healthy cells through these receptors, a process known as peripheral tolerance. Hence, by blocking the pathways of cancerous cells disguising themselves as healthy cells, the immune system will be able to recognize them as pathogens and form an effective response. 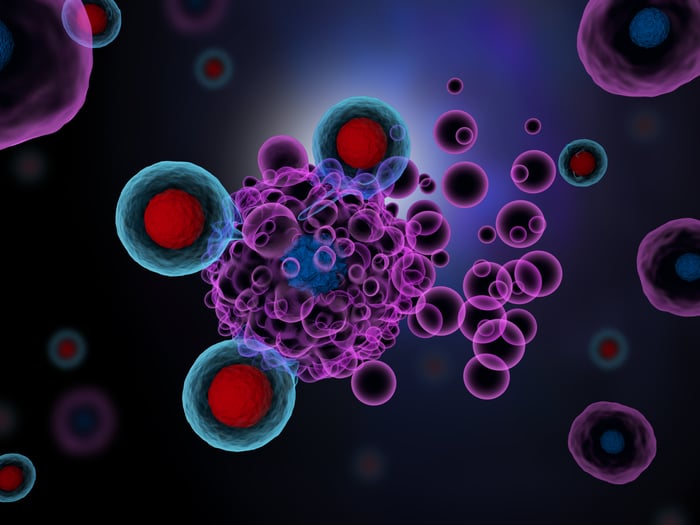 Currently, immunotherapy drugs such as nivolumab, pembrolizumab, and ipilimumab target the PD-1 and CTLA-4 checkpoint inhibitors. On the other hand, Compugen claims it has discovered a new set of protein receptors responsible for peripheral tolerance.

As a result, it's now investigating three novel immunotherapy candidates to target various types of cancer. All three therapies are undergoing phase 1 clinical trials. However, only one candidate, COM701, has data available to analyze.

Is the data as good as the theory?

COM701 is an antibody that inhibits the activity of the newly discovered (by Compugen) PVRIG receptor, which is theorized to prevent the activation of T-cells against many types of tumor activity, such as in melanoma, ovarian cancer, endometrial cancer, lung cancer, breast cancer, and colorectal cancer. The therapy is administered intravenously to patients every three to four weeks. In an interim clinical data release involving 13 patients treated with either COM701 alone or with COM701 and Opdivo (nivolumab, an approved PD-1 inhibitor), the stable disease control rate was 69%. This metric represents the percentage of patients with advanced-stage cancer who saw their condition stabilize after intervention therapies were administered in clinical trials. There are concerns in the scientific community that the metric is ambiguous and may exaggerate therapeutic effects.

A much better endpoint in this case would be the partial response rate, which is defined as the percentage of patients showing at least 50% reduction in tumor size after an experimental therapy is administered. In another interim data release this April, there were two cases of partial responses among 28 patients in the COM701 and COM701-plus-Opdivo arms, resulting in a partial response rate of just 7%.

Not only did the clinical trial not have a standard-of-care comparison cohort, but patients enrolled also received a median of seven other oncological drugs before the investigation began. That makes it extremely difficult to tell whether or not COM701 works.

Does this mean the stock is no good?

Despite the uncertainty surrounding COM701, investors shouldn't be dismayed. Usually, when investing in small-cap biotech stocks, what's far more important in the decision-making process is to see whether the company is backed by institutional investors. Institutional investors have vast teams of doctors, pharmacists, and biology experts who conduct due diligence into whether a mechanism of action for a particular drug is promising, and who are well-informed about a company's potential. Luckily, Compugen has the backing of Ark Investment Management -- a famously bullish investor of Tesla (NASDAQ: TSLA). The firm owns over eight million shares of Compugen, accounting for more than 10% of the company's outstanding shares.

Furthermore, the company has numerous research and development agreements with big players in the pharmaceutical sector. Bayer (OTC:BAYR.Y), AstraZeneca (NYSE:AZN), and Bristol Myers Squibb (NYSE:BMY) have all signed up for research and development partnerships with Compugen's pipeline candidates, including COM701. Together, the three pharmaceutical giants have invested $50 million into the company in the form of up-front payments, with over $500 million in potential milestone payments tied to the success of its clinical trials.

Full phase 1 results from COM701 are set to be released next year. In the meantime, the company has enough capital to stay afloat, with $43 million in cash and only $27 million in expenses last year.

This may be a potential opportunity for biotech investors with a high risk tolerance. Nonetheless, it would be wise to diversify across a basket of stocks in the sector, in case Compugen's clinical candidates show no promise.