Please ensure Javascript is enabled for purposes of website accessibility
Log In Help Join The Motley Fool
Free Article Join Over 1 Million Premium Members And Get More In-Depth Stock Guidance and Research
By Nicholas Rossolillo – May 4, 2020 at 10:03AM

Mastercard's shares may trade at a high valuation, but the payment-processing powerhouse is only becoming more important.

It was a foregone conclusion that the first quarter of 2020 was going to get rough for Mastercard (MA 3.71%). At the start of the year, its stock valuation was based on the assumption of smooth sailing and steady growth for the foreseeable future, but what has happened since then has been anything but smooth.

Mastercard management had already warned investors to expect less-impressive results, calling for low single-digit percentage revenue growth in the first quarter (and that includes the effects from acquisitions) and plenty of question marks beyond that as the coronavirus lockdown started to take a heavy toll on the global economy.

The final results for the quarter were not surprising, but even though Mastercard pulled its financial guidance for the rest of 2020, it's clear that digital transactions are more important than ever before with much of the world operating under social-distancing and stay-at-home protocols. 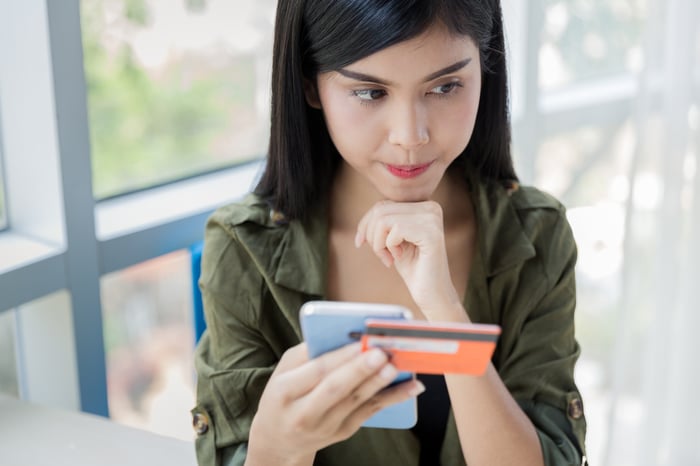 Mastercard reported strong growth in the dollar volume of transactions processed (up 8% from a year ago), the number of switched transactions (authorization, clearing, and settlement, up 13%), and other services (primarily data and cybersecurity, up 26%). All of that was offset by an increase in rebates and incentives associated with transaction-processing deals and the coronavirus shutdowns.

Still, considering that the global travel industry basically closed up shop starting in March -- which was reflected in Mastercard's 1% Q1 decline in cross-border transactions, even though January started with a 15% year-over-year increase -- the company's final figures could have been worse.

Revenue rose, but so did expenses, which left operating income flat. Mastercard offset the difference with some share repurchases -- $1.4 billion worth in the quarter, to be exact -- which helped earnings adjusted for year-over-year comparability notch a 3% gain. The company had $10.7 billion in cash and equivalents on the books at the end of the quarter. That's ample liquidity to ride out the COVID-19 downturn, but share repurchases have been suspended as the company is exploring other deals and acquisitions instead to foster future growth once the crisis has passed.

Some transaction types are already rebounding

The concern on everyone's mind right now, though, is where the money is moving and when economic activity will recover. The pause in travel is the biggest drag, and it will continue to be until it becomes clear the pandemic is subsiding and government-mandated restrictions around the world begin to ease.

Nevertheless, Mastercard did report some positive signs. Much of its "other" revenue isn't dependent on transaction volumes, so that segment is doing well. However, digital transactions are its bread-and-butter. Fully digital money movement has remained in positive territory all year thus far and cross-border digital was up nearly 40% year over year by the third week of April. But that was more than offset by declines in other transaction types (card-present in-person purchases), though declines started to ease by the week that ended April 21.

It remains to be seen whether a corner has been turned or not, and management promised to update investors on what it's seeing. But it should be assumed that its results in the second quarter will be worse than those from the first quarter were. However, Mastercard's fully digital processing segment is still growing, and the crisis is proving the value of digital transactions over cash. The stock is trading at 37.7 times trailing 12-month free cash flow, which is a high premium. But given that Mastercard has an ample runway for future expansion, high operating profit margins (55% in Q1), and plenty of liquidity, this fintech giant will remain a long-term staple of my portfolio.