Please ensure Javascript is enabled for purposes of website accessibility
Log In Help Join The Motley Fool
Free Article Join Over 1 Million Premium Members And Get More In-Depth Stock Guidance and Research
By Timothy Green - Updated May 4, 2020 at 4:43PM

Costs are up and Tyson expects volume to slump in the second half.

The global pandemic has hit Tyson Foods (TSN -0.04%) from multiple directions. The virus itself has led to production slowdowns, the temporary idling of facilities, reduced employee attendance, and supply-chain volatility. On the demand side, sales have shifted from foodservice to retail as the restaurant industry reels from the pandemic.

While total revenue was up for Tyson in the second quarter, elevated production costs hurt the bottom line, and the company missed analyst estimates across the board. The second half of the year may be even worse, with the company anticipating a volume decline and the continuation of higher production costs. 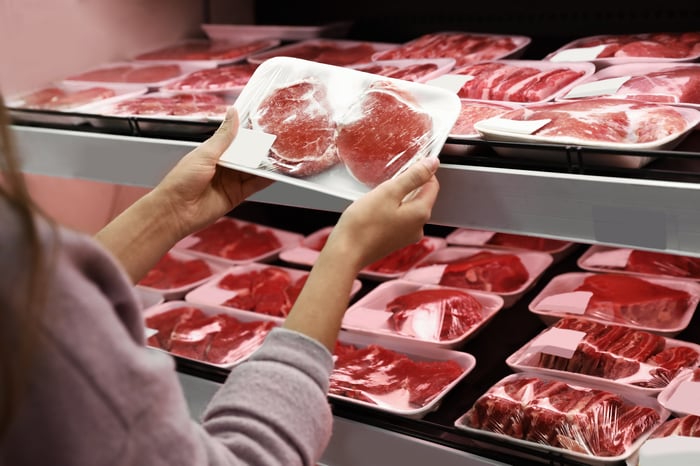 Margins down across the board

Tyson reported second-quarter revenue of $10.9 billion, up 4.3% year over year and $120 million below the average analyst estimate. Non-GAAP (adjusted) earnings per share came in at $0.77, down 36% and $0.35 lower than analyst expectations.

Beef and pork volumes were up 2.7% and 2%, respectively, while chicken volumes slumped 1.5% and prepared foods volume dropped 0.1%. Despite average pricing gains for everything but beef, Tyson saw its adjusted operating margin tumble by 1.5 percentage points to 4.6%. Lower productivity was a problem during the quarter, driving up per-unit production costs. Gross margin was 9.4% during the quarter, down 2 percentage points year over year.

More pain in the second half

While the decline in foodservice demand is being partially offset by rising retail demand, it's not enough to pick up all of the slack. Tyson expects overall sales volume to decline in the second half of its fiscal year as a result. The company didn't provide any hard numbers due to the uncertainty surrounding the pandemic.

On top of lower volumes, Tyson expects higher production costs to persist until the virus is brought under control. The company expects continued issues with slowdowns, plant shutdowns, and employee shortages, which will put pressure on productivity. The company declined to provide any guidance on operating margin, although it's safe to say margins will almost certainly be down from last year.

In the beef business, Tyson does not expect supply to be an issue in areas where it operates plants. The company also expects beef profitability to remain strong. In the pork business, livestock costs are expected to decrease, and export markets are expected to become more available.

With the virus still spreading in the United States, it may be many months before the headwinds Tyson is facing begin to fade. And if the reopening of the economy in some areas of U.S. reaccelerates the spread, or if a second wave later this year prompts additional measures from state and local governments, Tyson may struggle with production issues for quite some time.

Operating a small number of large production facilities is highly efficient in normal times, but problematic during a pandemic, both for Tyson itself and for the nation's meat supply. A pair of senators asked the Federal Trade Commission last month to open an antitrust probe into the meatpacking industry. With the downsides of industry concentration laid bare by the pandemic, it's not unthinkable that the government will act, especially if shortages become a real problem.

Tyson stock is now down about 42% from its 52-week high after a post-earnings plunge, but investors may not be fully accounting for all the risks facing the company.