Please ensure Javascript is enabled for purposes of website accessibility
Log In Help Join The Motley Fool
Free Article Join Over 1 Million Premium Members And Get More In-Depth Stock Guidance and Research
By Billy Duberstein - Updated May 4, 2020 at 3:08PM

Shares of Advanced Micro Devices (AMD -4.65%) rose 15.2% in April, according to data from S&P Global Market Intelligence. The high-growth chipmaker experienced a rebound from March, when the coronavirus broke out across the world, leading to fears of a recession.

Recessions are usually very bad for semiconductors, since consumers and businesses pull back on purchases. But AMD bounced back, as investors realized its chips will find heavy use in laptops and data centers, which saw a surge in demand amid the stay-at-home economy. The company also reported earnings late in the month, which met analyst expectations. 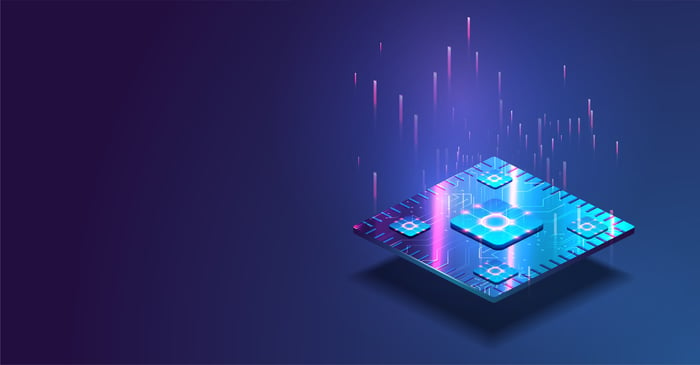 That likely lit a fire under AMD, which makes central processing units (CPUs) and graphics processing units (GPUs) for laptops and data centers. The company also makes semi-custom chips for gaming consoles, and with more people staying at home, demand for video game consoles is expected to rise, with new PlayStation and Xbox consoles to be released for the holidays this year.

Not only should the stay-at-home economy offset economic weakness, but AMD is also gaining market share from chip giant Intel (INTC -2.09%). The first quarter marked the 10th straight quarter of market share gains for AMD in client processors, and the company expects to continue that this year. That's because AMD, in conjunction with foundry Taiwan Semiconductor Manufacturing (TSM -1.93%), was able to surpass Intel in the race to 7nm processing in late 2018, a lead it holds to this day.

AMD is also gaining share in the all-important data center market, noting significant adoption of its second-generation EPYC data center processors among most of the big cloud vendors. The company had several press releases during April announcing the adoption of EPYC processors across a large number of big, prominent tech giants.

On the first-quarter conference call with analysts, CEO Lisa Su pointed to a range of 20% to 30% growth for 2020. While very robust, especially in a recessionary environment, the low end of guidance was actually below AMD's initial outlook for the year, set back in January, of 28% to 30%. The drop was due to the uncertainties around PC demand in the second half.

The lowered guidance actually caused a bit of a sell-off in AMD shares after a pre-earnings run-up. However, it's good that the company still kept the high point of the range intact. That means it isn't seeing softness just yet.

Amid the COVID-19 outbreak, big tech seems somewhat insulated due to the increasing demands on tele-work, -education, and -medicine, even as GDP contracts. As a top tech growth stock taking share from others, that's also true of AMD.