Please ensure Javascript is enabled for purposes of website accessibility
Log In Help Join The Motley Fool
Free Article Join Over 1 Million Premium Members And Get More In-Depth Stock Guidance and Research
By Parkev Tatevosian – May 5, 2020 at 9:14PM

The company saw increased demand from consumers tackling projects around the house.

Shares of Home Depot (HD -0.86%) were up 17.7% in April, while the S&P 500 gained over 12%, according to data provided by S&P Global Market Intelligence. Staying open during a time when many businesses were forced to shut down because of the COVID-19 pandemic gave it a crucial source of revenue.

Early in April, the company made an announcement highlighting the changes it was making to limit the spread of the outbreak while providing essential products and services to its customers.

Among the safety measures announced, the company will close stores earlier, limit the number of customers allowed into stores at one time, and ask associates to check their temperature before reporting to work.

The company also announced several benefits to take care of its workforce, including paid time off for all employees, bonuses for hourly associates in stores and distribution centers, and asking all who can work from home for store support functions to do so. 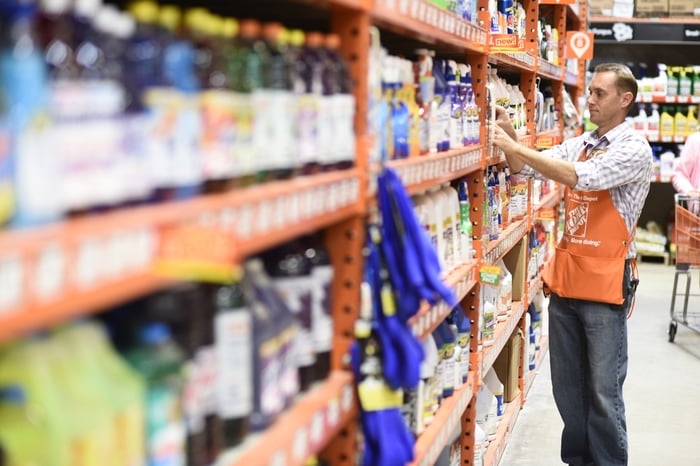 As people have been confined to their homes, one activity on the rise has been home improvement projects. Home Depot has benefited from this increase in demand. Still, the surge may be short-lived as states in the U.S. begin lifting stay-at-home orders and consumers shift to other interests.

The company next reports earnings on May 21, and investors will be looking for how changes in consumer behavior and increased expenses to deal with the coronavirus outbreak affected profits.

In mid-March, the company made sure it will not be short of liquidity by going to the debt markets and raising cash to the tune of $5 billion. Even if lowered revenue and increased expenses hurts cash flow significantly, it will have enough on hand to get it through to the other side.