Please ensure Javascript is enabled for purposes of website accessibility
Log In Help Join The Motley Fool
Free Article Join Over 1 Million Premium Members And Get More In-Depth Stock Guidance and Research
By Rhian Hunt – Updated May 6, 2020 at 4:48PM

The company has seen a massive rebound in sales in its North American market.

Reporting on its first quarter of 2020 yesterday, Papa John's International (PZZA -2.41%) revealed positive growth, earnings per share (EPS), and revenue figures compared to Q1 2019's negative metrics. However, with the economic damage imposed on the U.S. economy in general and the restaurant industry in particular in March, its performance fell short of consensus analyst estimates. 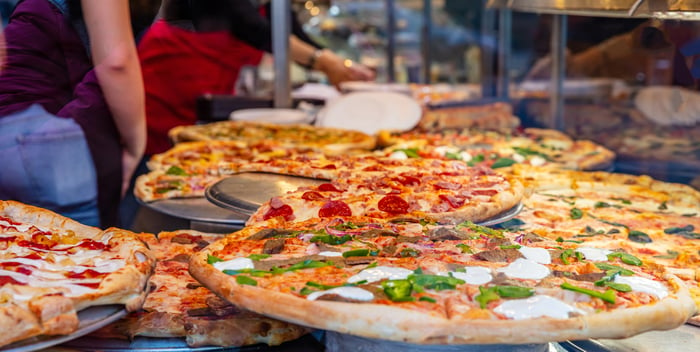 Globally, restaurant sales grew 5.3% in Q1 2020, rather than shrinking 5.5% as it had in 2019. In North America, company-owned restaurants saw comparable sales expand 6.1% and franchisees enjoyed 5.1% growth, once again reversing previous-year sales losses.

Providing a preliminary look at April, Papa John's indicates that comparable sales grew explosively in the U.S., skyrocketing 26.9%. International sales remained far weaker but still climbed a little, growing an estimated 1.4%. The company states the reason for these soaring sales is that "unprecedented numbers of families are relying on Papa John's" and remarks it is "rising to this challenge."

The enterprise reports that it has enough cash on hand for its needs, with backup in the form of $350 million in revolving credit, which it has not yet drawn down. CEO Robert Lynch stated during the followup earnings conference call that the company attracted in excess of 1 million new customers during April.