Please ensure Javascript is enabled for purposes of website accessibility
Log In Help Join The Motley Fool
Free Article Join Over 1 Million Premium Members And Get More In-Depth Stock Guidance and Research
By Reuben Gregg Brewer – May 6, 2020 at 8:22AM

The dour mood on Wall Street appears to have reversed, but the problems this trio of REITs faces are far from over.

The only problem for investors is that the impressive April gains haven't nearly made up for the losses this trio has seen so far in 2020: Tanger is off by 56%, Simon is lower by 59%, and Macerich pulls up the rear with a 74.4% drop. There's obviously a bigger story going on.

The bear market early in the year was one reason why mall real estate investment trusts have fallen so hard this year. The quick market turnaround in April, after a dismal March, was part of the reason for the strong gain last month. But these aren't the only factors at play, with changing industry dynamics really providing a better backdrop for the gyrations being seen today. 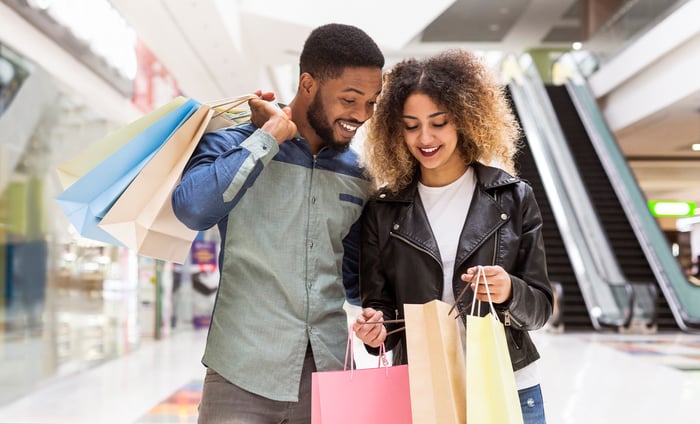 The long-term problems facing mall REITs are the same as the ones facing retailers. Consumers are increasingly choosing to shop online, a trend that some have dubbed the "retail apocalypse." That's really a bit of hyperbole, even though there's a grain of truth in it. Online shopping is gaining share, but it is still relatively small compared to physical shopping. The problem for malls is that some of the hardest-hit shopping sectors (like apparel and department stores) happen to be mall mainstays.

Retailers are shutting stores and, in some cases, going bankrupt. While the shift toward online shopping is a key piece of the problem, it's not the only reason for the pain. Many of the most troubled retailers are over-leveraged, and many more haven't moved aggressively enough to adjust to shifting consumer buying habits.

There's no point getting too deep in the woods on this issue -- the end result is that mall landlords have been forced to deal with retailers that are pulling back on store counts and seeing weak foot traffic.

Although most of the public mall REITs own fairly desirable assets, there are really too many malls in the country today. Once weaker malls get shuttered or repurposed, better-positioned malls will likely benefit from increased customer traffic and increased demand from retailers. But mall REITs are going to be seen in a negative light until this shaking out process is worked through.

That was the backdrop coming into 2020, with heavily indebted mall REITs, like Macerich, working with an extra headwind. And then COVID-19 started its march around the world. Like other countries, the United States tried to contain the spread of the coronavirus by asking people to practice social distancing. That included shutting non-essential businesses, which included malls. Note that COVID-19 appears to spread fairly easily in group settings, and malls are purpose-built to bring large groups of people into one (often enclosed) place. Investors sold the stocks as malls shut their doors in March. 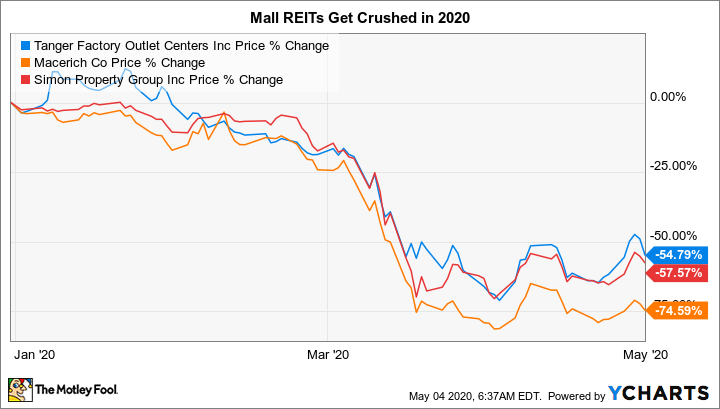 The United States appears to have slowed the spread of COVID-19 at this point. Non-essential businesses are starting to reopen in parts of the country, including malls and the stores within them. That's led to a more positive outlook for malls and helped the stocks rally in April along with the broader market, which was bouncing back from a bear market. Don't get too excited, though -- there are still big problems to deal with.

For example, Macerich and other highly leveraged mall REITs quickly trimmed dividends when their properties shut. It was the right move, but it speaks to bigger issues. Indeed, even as Simon's plans to start reopening its malls leaked into the market, the changes it was putting in place remain a huge question mark.

For example, it is enhancing its cleaning efforts, which will increase operating costs. It is going to offer free masks to mall patrons, another added cost. It will limit hours, reducing shopping time. And it will carefully monitor the number of shoppers allowed in its malls at any given time (to support social distancing efforts), reducing foot traffic. In other words, the malls won't be quite the same as they were before they shut down. And that assumes that people, likely to still be worried about catching COVID-19, will even want to venture out to a mall.

Adjusting to the new state of affairs will take time. And opening all of the malls across the country will likely be a slow-moving process, with some states opening sooner than others. So investors, despite the rapid price gains in April, shouldn't expect a sharp rebound in mall results.

Now add to this the fact that mall tenants are dealing with their own headwinds. Many have been pushing hard for rent concessions, a trend that's not likely to change just because malls are reopening. And every time a mall tenant goes bankrupt or chooses to shut stores, mall REITs have to figure out what to do with the space they get back. Finding new tenants is a slow process even in the best of times, and with COVID-19 in the mix, it is likely to be even harder.

To be fair, Simon, Tanger, and Macerich are all likely to muddle through this rough patch. However, investors should go in expecting this to be a long and drawn-out turnaround effort for mall REITs. The COVID-19 pandemic appears to be speeding up the longer-term trends in the retail space, and that will make a tough market even more difficult. There are likely to be more dividend cuts along the way, perhaps even at Simon and Tanger.

This is not a place for risk-averse investors to tread today, and if you do venture into the mall REIT space, strongly consider sticking to the largest and best-positioned names -- Simon Property Group heads that list.