Please ensure Javascript is enabled for purposes of website accessibility
Log In Help Join The Motley Fool
Free Article Join Over 1 Million Premium Members And Get More In-Depth Stock Guidance and Research
By Keith Speights - Updated May 6, 2020 at 1:57PM

The animal health company now projects lower revenue and earnings this year as a result of the pandemic.

Zoetis (ZTS -1.17%) beat Wall Street estimates with its 2019 fourth-quarter results announced in February. But the celebration was short-lived. The stock market crash caused by the COVID-19 pandemic pulled Zoetis shares down as much as 36% at one point. However, the stock has now regained most of those losses.

The animal health company reported its first-quarter results before the market opened on Wednesday. Was there again a cause for celebration? Here are the highlights from Zoetis' Q1 update. 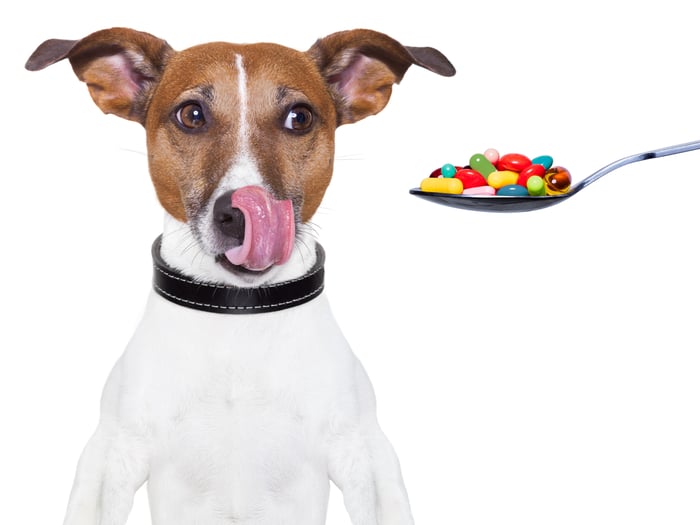 Zoetis announced Q1 revenue of $1.53 billion, a 5% increase from the $1.46 billion reported in the year-ago quarter. The company's reported revenue was slightly higher than the average analyst estimate of $1.5 billion.

Net income was $423 million, or $0.88 per share, based on generally accepted accounting principles (GAAP). This reflected significant improvement from the GAAP earnings of $312 million, or $0.65 per share, recorded in the same period in 2019.

It's important to note that the first quarter for Zoetis' international segment ended in February instead of March. This, combined with shelter-in-place orders across the U.S. beginning later than in many other countries, meant that the COVID-19 pandemic didn't have much impact on Zoetis in the first quarter.

The company continued to perform well in the U.S. market, with Q1 revenue rising 9% year over year to $786 million. Zoetis' companion-animal product sales jumped 12% thanks in large part to growth for its pet dermatology brands Apoquel and Cytopoint. The recent acquisitions of Platinum Performance and several regional diagnostics reference labs also boosted Q1 revenue for the company's companion-animal products business.

U.S. livestock product sales climbed 5% year over year in the first quarter. Zoetis stated that its poultry and swine products enjoyed double-digit percentage growth, led by higher sales of Zoamix, which is used in medicated feed additives for poultry in place of antibiotics, and by increased demand for swine anti-infectives and vaccines.

Zoetis' international segment revenue increased by only 1% year over year, with currency fluctuations lowering growth by around 3%. International sales of companion-animal products rose 5% year over year primarily due to momentum for the Simparica franchise. But livestock product sales fell 1% on a reported basis.

Although Zoetis didn't feel much impact from the COVID-19 pandemic in the first quarter, it's likely to be a different story later on. CEO Kristin Peck said the company is "realistic about the challenges and uncertainties that the COVID-19 pandemic presents to our society, global economy and Zoetis' business in the coming months." Like several companies in the healthcare sector, Zoetis lowered its guidance for full-year 2020 because of COVID-19.