Please ensure Javascript is enabled for purposes of website accessibility
Log In Help Join The Motley Fool
Free Article Join Over 1 Million Premium Members And Get More In-Depth Stock Guidance and Research
By Lawrence Rothman, CFA – Updated May 7, 2020 at 5:49PM

Which of these retail heavyweights makes the better long-term investment?

Costco Wholesale (COST 0.45%) and Target (TGT -0.42%) are two large, successful retailers. While both have remained open during the coronavirus pandemic, the two operate very different businesses.

Costco runs membership-only warehouses, providing low prices on a wide range of merchandise, but with a limited selection of brand-name and private-label products. You have to buy items in bulk, but it offers competitive prices by keeping costs down through large-scale purchases and its no-frills, self-service warehouses.

On the other hand, Target sells everyday products and fashionable, differentiated goods. The company generated approximately two-thirds of its sales from brand-name merchandise and the rest from its own brands or those with which Target has an exclusive relationship.

While both have done well, the question is: Which would you rather own long term? The answer requires carefully analyzing each company. 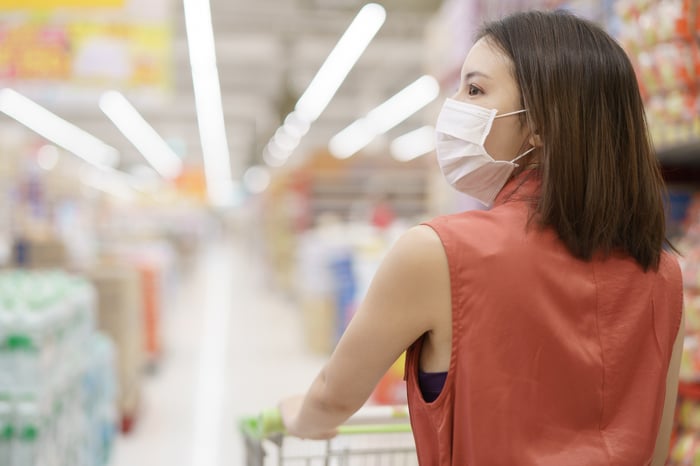 Costco has had a remarkable run of same-store sales growth, going back more than a decade. In the first half of fiscal 2020 (ended Feb. 16), comps increased 6.5% after excluding changes from gasoline prices and foreign currency.

In February, comps increased 11.7%, benefiting from people stocking up on items like paper towels as the coronavirus spread. While this bump won't last over the long term, its business model is working. Offering low prices on quality merchandise is a winning formula. After all, there is a reason Costco's membership renewal rates have hovered around 90% for the last several quarters.

How much confidence do management and the board of directors have in the business' prospects? While other companies have cut dividends, Costco recently raised its quarterly payout from $0.65 to $0.70. The company initially declared a dividend in 2004 and has raised it annually since 2005.

Target hasn't had the same consistent sales increases. But it has been pushing initiatives for the last few years, including omnichannel capabilities that allow for same-day pickup or delivery along with an improved selection of food and exclusive merchandise that drive store traffic. The company reported annual top-line advances for the last three years, and GAAP diluted EPS rose from $5.32 to $6.42 over the same time frame.

In previewing first-quarter results, management said that comps through the end of April rose more than 7%. But higher costs, including increased wages, temporarily dented Target's profit. The drivers of the higher comps later in the quarter were the lower-margin essentials and food and beverage categories versus apparel and accessories.

In tough economic times, people will still go to Target for food and other everyday items, but they are likely to put off shopping for clothes.

Even during down economic cycles, Target has continued hiking its dividend, raising it annually for nearly a half-century. Its 41% payout ratio suggests the company can comfortably continue paying dividends.

Using the price-to-earnings ratio as a measuring stick, Costco shares are relatively more expensive than Target's. The former sells at a P/E of 36 while the latter's P/E is 18.

Costco's low prices will always resonate with shoppers. Results held up relatively well during the previous recession, with comps and earnings falling in fiscal 2009 as spending slowed before regaining steam. But it is a model that has proven very successful over the long term.

Target deserves kudos for continuing to evolve and grow in a very competitive retail environment. While its food and other items will continue to do well, economic woes will hurt sales of its higher-margin items.

For me, the verdict is clear: While Costco is more expensive based on P/E, sometimes you have to pay up for consistency.