Please ensure Javascript is enabled for purposes of website accessibility
Log In Help Join The Motley Fool
Free Article Join Over 1 Million Premium Members And Get More In-Depth Stock Guidance and Research
By Eric Volkman - May 7, 2020 at 7:09PM

The company's Ingrezza continues to power its revenue and profitability growth.

The biotech company published the quarterly release after market hours on Tuesday, revealing that it booked revenue of $237.1 million -- 71% higher than the Q1 of fiscal 2019 figure. On the bottom line, under GAAP standards, the company flipped to a net profit of $37.4 million, or $0.39 per share, from a year-ago loss of $102.1 million. Non-GAAP (adjusted) net income nearly tripled, to $79.1 million. 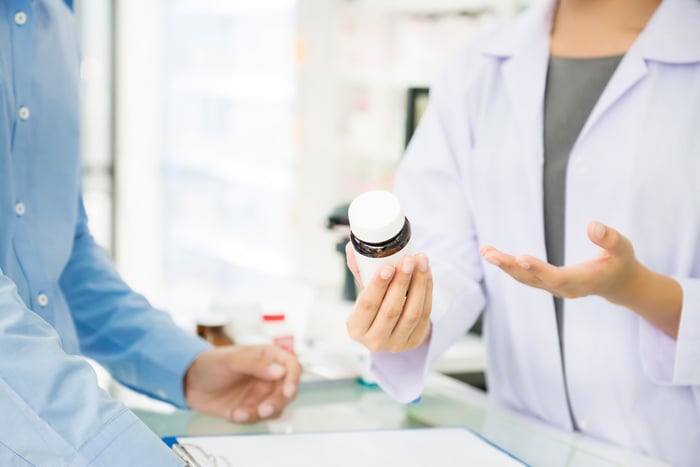 That performance was mixed, as far as analyst estimates go. On average, prognosticators following the stock believed Neurocrine would post sales of just over $138 million and per-share GAAP net income of just under $0.66.

The company's robust growth was almost entirely due to increased sales of the very successful Ingrezza, its treatment for tardive dyskinesia (a disorder in which a patient suffers from involuntary body motions). Since Ingrezza sales comprised more than 97% of Neurocrine's revenue, the company's fortunes have depended on the performance of the drug.

That will end soon, however. Late last month, Neurocrine won Food and Drug Administration (FDA) approval for Ongentys, a once-per-day, add-on pill that treats Parkinson's disease. Although the company is delaying the commercial launch of Ongentys due to the SARS-CoV-2 coronavirus outbreak, it's eager to place it on pharmacy shelves.

Neurocrine's stock rose by nearly 5.3% on Thursday, well outpacing the gains of the broader stock market.