Please ensure Javascript is enabled for purposes of website accessibility
Log In Help Join The Motley Fool
Free Article Join Over 1 Million Premium Members And Get More In-Depth Stock Guidance and Research
By Joe Tenebruso – May 8, 2020 at 7:06PM

An update from one of the major cruise-line operators boosted investor optimism.

With their ships stuck at port due to sailing restrictions imposed by health agencies during the COVID-19 crisis, the major cruise-ship companies are bleeding cash. In turn, Royal Caribbean, Norwegian, and Carnival have all taken on more debt in order to raise the cash they need to survive until their ships can begin sailing again.

On Friday, Royal Caribbean said it had approximately $2.3 billion in cash reserves as of April 30, which it boosted by drawing $150 million from its senior secured credit facility on May 4. "Since late January, we have undertaken several proactive measures to mitigate the financial and operational impacts of COVID-19," Royal Caribbean CFO Jason Liberty said in a press release. "Our focus is on bolstering liquidity through significant cost cutting, capital spend reductions, and other cash conservation measures."

Liberty went on to say that Royal Caribbean is considering other ways to obtain cash. "We continue to evaluate all options available to us to further enhance liquidity," he said. 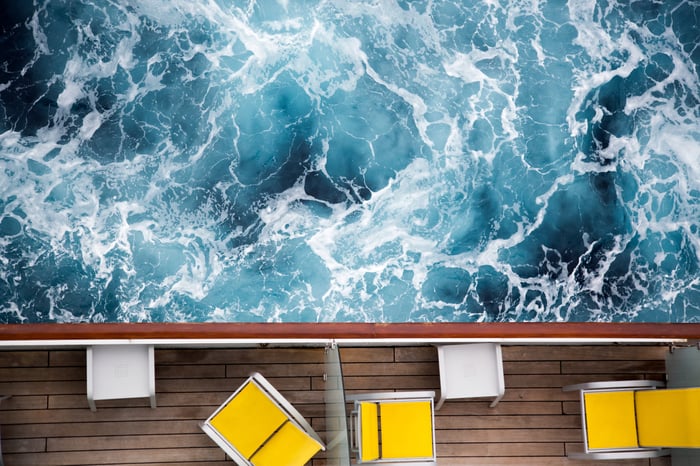 Cruise-ship companies clawed back some losses on Friday, even as the industry continues to face rough seas ahead. Image source: Getty Images.

Cost cuts can only go so far. And taking on more debt to raise cash is not a panacea. Eventually, the bill will come due.

And while their ships are docked at ports, the cruise-ship giants continue to burn through cash. Royal Caribbean alone is losing as much as $275 million per month.