Please ensure Javascript is enabled for purposes of website accessibility
Log In Help Join The Motley Fool
Free Article Join Over 1 Million Premium Members And Get More In-Depth Stock Guidance and Research
By Nicholas Rossolillo - May 10, 2020 at 1:41PM

It's never too late to correct a mistake.

It's no secret that, once upon a time, Warren Buffett once owned a tiny entertainment and theme park operator called Walt Disney (DIS -2.01%). But that was in the 1960s, turbulent times for the markets, and Buffett and company sold their stake after a little over a year of ownership for a tidy 50% profit. Sounds like a great move, except for one little problem: Disney has since grown into the world's most recognizable entertainment factory, and Buffett has foregone billions in profits along the way.

It's never too late to fix a past mistake, though, and the recent downturn in Disney stock looks like the right time for Buffett's Berkshire Hathaway (BRK.A -1.64%) (BRK.B -1.74%) to make amends. As I (wrongly) opined at the end of March, I wasn't in a hurry to add to my position due to there being too many question marks surrounding the company's performance in the midst of the coronavirus lockdown. Besides, the House of Mouse already makes up about 5% of my portfolio.

But for an investor starting from a position of zero -- especially the world's most famous value investor -- Disney looks compelling after its fiscal 2020 second quarter. 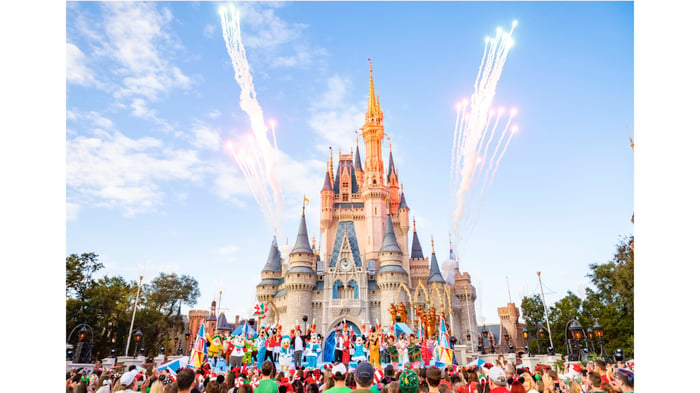 The cheapest it's been in a long while

Disney's latest quarter (the three months ended March 28, 2020) was a mess to sort through. Revenues were up 21% year over year on strength in its new direct-to-consumer streaming platform (Disney+, Hulu, and ESPN+) and media networks, offset by Disney's park and resort closures. As a result, free cash flow (operating cash flow less capital expenditures) fell 30% to $1.91 billion.

There was some good news, including the fact the Shanghai Disney resort will begin a phased reopening on May 11. But suffice it to say the next quarter will look far worse with the two marquee resorts in the U.S. still not creating any magic, movie theaters closed and not showcasing Disney blockbusters, and sporting events sidelined. The profitability picture was already hard to read due to Disney's $71 billion takeover of 21st Century Fox in early 2019, and coronavirus is further clouding the picture. Since Disney's trailing 12-month free cash flow is currently negative (negative $314 million to be exact), using profit-based valuation metrics to determine whether Disney is a buy currently doesn't help much.

But here's where an old -- and oft-abandoned -- Buffett valuation measure makes me think Disney should be on the Oracle's short-list. Disney's current price-to-book ratio is at 2.0. That's the cheapest the entertainment empire has been since the years following the financial crisis of 2008 and 2009. Paired with Disney's long-term return on equity (how profitable its net assets are) averaging in the double digits, the Magic Kingdom looks like a bargain for those thinking years down the road. 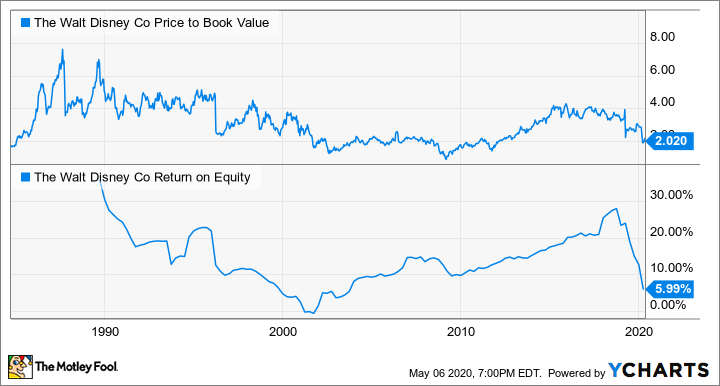 Of course, one might be able to argue Disney is far cheaper than that price-to-book ratio of 2.0 indicates. That's because lumped in with the resorts and studio networks is Disney's extensive portfolio of entertainment property -- Marvel, Pixar, Star Wars, and a massive backlog of animated content spanning nearly a century. Creating entertainment content is one thing, but amassing a loyal following for that content is another task entirely.

Disney is leveraging that property into another asset that price-to-book value doesn't accurately capture -- streaming. Software-based assets are efficient money-generating machines, and thus price-to-book value isn't useful. Lumped in with all those other Disney properties is the aforementioned direct-to-consumer segment, which grew its total subscriber base to 73.5 million at the end of March (which is now even higher with Disney+ subscribers of 33.5 million at the end of March surging to 54.5 million at the time of the second-quarter earnings call). That easily cements Disney into second place behind Netflix, and just look at the valuations that the streaming leader's stock commands. 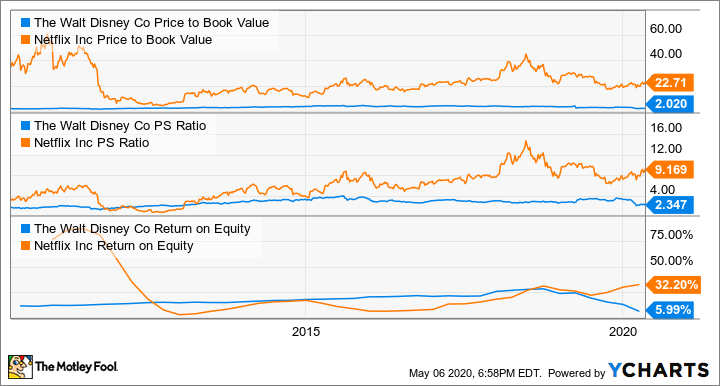 All of this is to say that Disney looks cheap with its legacy assets in current distress (but likely to rebound) concealing a fast-growing, tech-based segment with massive profit-generating potential. Disney is a great example of an old business successfully transitioning to a 21st-century operating model, and the company will emerge from the mess the world finds itself in stronger than ever before. I wouldn't be surprised if the leader in entertainment shows up on Warren Buffett's list of recent stock purchases.