Please ensure Javascript is enabled for purposes of website accessibility
Log In Help Join The Motley Fool
Free Article Join Over 1 Million Premium Members And Get More In-Depth Stock Guidance and Research
By Anne Burdakin – Updated May 11, 2020 at 3:15PM

The pandemic might have given shoppers and investors alike new appreciation for this consumer staples giant.

Kimberly-Clark (KMB -0.35%) posted very good first-quarter earnings, but one didn't need to be a genius to see that coming. The tissue giant experienced huge demand for toilet paper due to the coronavirus stay-at-home mandates -- even big-box stores were sold out on a regular basis.

Consumer tissue segment net revenue -- including toilet-paper brands Cottonelle, Scott, and several others sold globally -- was up 13% in the first quarter, and net selling prices increased 1%. Heavy demand is continuing as people around the world shelter in place.

Kimberly-Clark's share price is roughly flat year to date, which compares favorably with the consumer staples sector's drop of about 8%, and the broader market's drop of roughly 9%. 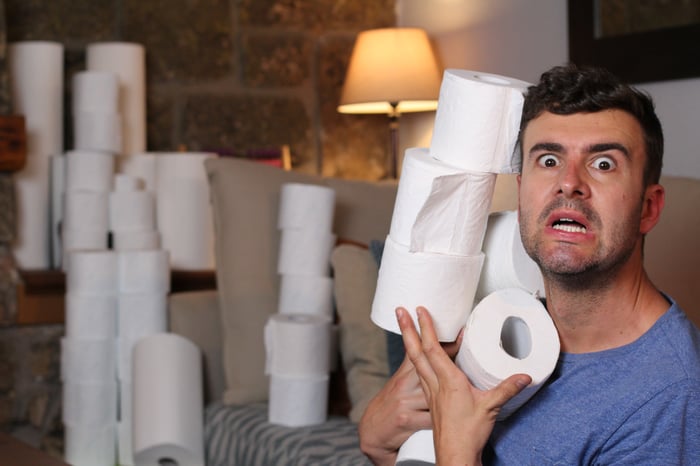 Kimberly-Clark reported first-quarter earnings on April 22. Adjusted earnings-per-share were $2.13, beating Wall Street's estimate of $1.96. Sales were $5 billion, up 8% year over year. The quarter included big gains in March, when consumers stocked up as stay-at-home orders began across the U.S.

The global market share report mirrored the North American results, with the exception of a few Latin American countries, like Peru, which saw some declines. Henry said: "Overall, our market shares are broadly healthy, which is a good place to be in this environment."

One attention-getter was the company's 45% year-over-year increase in net earnings, computing to $1.92 diluted net earnings per share, while gross profit went up 25%. This highlights the company's successful concentration on increasing efficiencies and decreasing costs.

"A combination of increased consumer demand for our products and strong execution by our teams is reflected in our first-quarter results," said CEO Mike Hsu in the company's earnings release.

Management at Kimberly-Clark is conservative, which is great when mass uncertainty hits. Its strong liquidity position has been key to taking advantage of lower raw materials costs and opportunities to grow customer awareness and market share.

Kimberly-Clark executed two long-term debt transactions in the quarter. As Henry explained, "The first was a $500 million 30-year bond offering that essentially pre-funded the $500 million of notes that will come due in August. In late March, we executed a second transaction, this one, a $750 million 10-year bond offering. That transaction enhanced our overall liquidity and flexibility and reduced our near-term need for commercial paper. We also continue to maintain two revolving credit facilities totaling $2.75 billion that we've never drawn upon."

The future is a bit foggy, given the ongoing health crisis. In response, the company suspended its share buyback program to conserve cash, and pulled 2020 guidance.

But is it a millionaire maker?

But we really want to know: Is Kimberly-Clark a millionaire maker stock? To which I would respond: It depends on how much you have to invest over what period of time.

The company has chugged along nicely, not dropping a great deal on market pullbacks, and not running up disproportionately when markets are rising. Consumer staples are generally purchased in both good times and in bad. If you have a long time horizon and want a stock that won't cause a lot of anxiety, Kimberly-Clark is a good one.

The dividend has an impressive track record. If you reinvest all your dividends, you give your stock the potential to earn even more dividends in the future. This is called compounding, and it increases over time, accelerating shareholder value, especially when share prices increase. The longer you do this, the greater the potential return.

If you had a very long time horizon and started the investment with a significant amount of money, it's possible to let Kimberly-Clark stock percolate, and eventually it would make you a millionaire. I think a better strategy is to make Kimberly-Clark a cornerstone stock in a millionaire-making portfolio, assuming all dividends are reinvested.

Kimberly-Clark is a dependable stock choice, but by itself I don't think it will make you a millionaire any time soon. However, I would definitely want it as an anchoring stock in a balanced stock portfolio that also contains value and growth stocks with bright futures. In that scenario, Kimberly-Clark would be a great team player in making you a millionaire.