Please ensure Javascript is enabled for purposes of website accessibility
Log In Help Join The Motley Fool
Free Article Join Over 1 Million Premium Members And Get More In-Depth Stock Guidance and Research
By Howard Smith - Updated May 12, 2020 at 4:41PM

He predicts the possibility of a major airline going out of business due to the COVID-19 pandemic impacts.

Boeing (BA -3.13%) president and CEO Dave Calhoun said he thinks airline passenger traffic levels will only be at 25% around September, in an interview with NBC News. Calhoun went on to say, "Maybe by the end of the year we approach 50%. So there will definitely be adjustments that have to be made on the part of the airlines," according to a CNBC report.

In its April 14, 2020, assessment of the state of the industry, the International Air Transport Agency (IATA), a trade association for the world's airlines, said the COVID-19 pandemic would cause passenger revenue to drop 55% compared to 2019, or up to $314 billion. 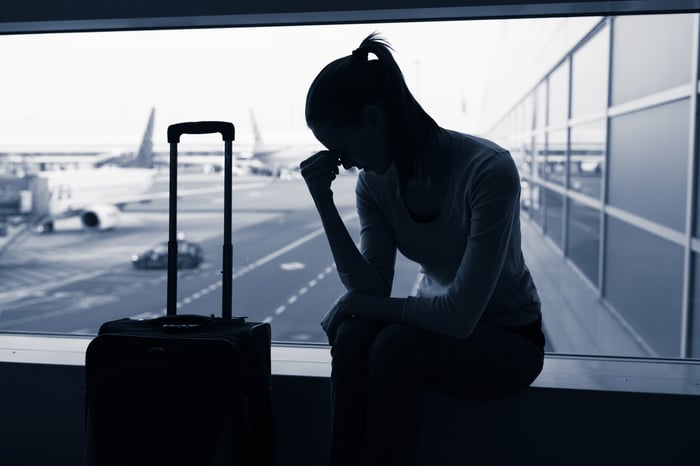 According to the report, Calhoun also said he believes a major U.S. airline will go out of business because of the crisis. A company spokesman later clarified that he was speaking on the uncertainty of the sector in general, and not about a particular airline.

The U.S. airlines have been announcing new protocols and safety requirements in an attempt to make customers more comfortable returning to travel. These have included requirements for passengers and workers to wear masks, increasing cleaning practices in airports and on planes, and in some cases employee temperature checks.

Airlines have also been trying to make the adjustments that Calhoun suggested. A lobbying group for many major airlines recently said in a statement to a congressional committee that airlines should be granted waivers on minimum service route requirements. Many mandatory routes lack demand and that service is an "unsustainable requirement," exacerbating liquidity issues, according to the trade group Airlines for America.