Please ensure Javascript is enabled for purposes of website accessibility
Log In Help Join The Motley Fool
Free Article Join Over 1 Million Premium Members And Get More In-Depth Stock Guidance and Research
By Anders Bylund – Updated May 12, 2020 at 2:35PM

It's an option, not an order, but the microblogging veteran "will make that happen" on a permanent basis for willing workers.

Microblogging service Twitter (TWTR 1.37%) was one of the first companies to let its employees work from home during the COVID-19 health crisis, and now the policy change looks permanent. In an internal email, first reported by BuzzFeed News and confirmed by many other sources, CEO Jack Dorsey said that most of Twitter's staff will be able to work from home "forever." 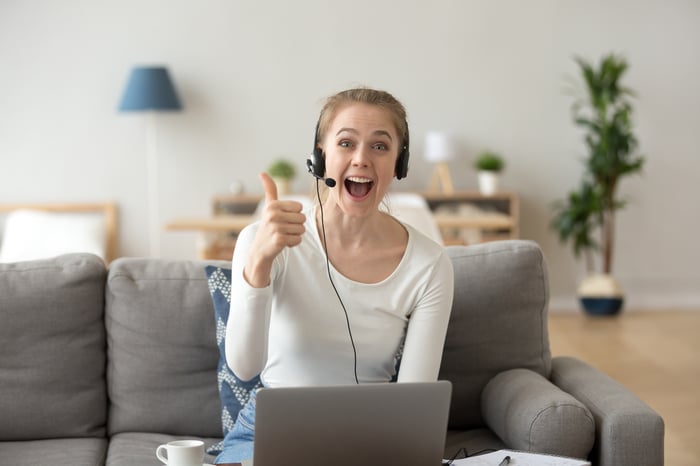 Dorsey's email said that most Twitter employees should be able to continue working from home permanently if that's what they want. To be clear, the company won't require anyone to take this path. Any employees whose job descriptions are suitable for remote work are encouraged to request a permanent change, and Dorsey's management team "will make that happen."

Those who prefer working from Twitter's offices around the world will be welcomed back, the email said, "with some additional precautions, when we feel it's safe to return." Most locations will stay closed at least until September, and Twitter won't hold any face-to-face meetings for the rest of the year. Business travel is not an option until the offices are ready to open, "with very few exceptions."

The IT industry at large followed Twitter's lead into allowing remote-work options in March and April. It's too early to say whether this was a one-time event or the start of a secular shift toward online meetings and work-from-home setups. If Twitter truly started a trend here, we'll see other IT giants following its example in the next few months. Keep an eye on potential bellwethers such as Alphabet, Microsoft, and Facebook to get a sense of what's next for remote-work policies.