Please ensure Javascript is enabled for purposes of website accessibility
Log In Help Join The Motley Fool
Free Article Join Over 1 Million Premium Members And Get More In-Depth Stock Guidance and Research
By John Rosevear – May 12, 2020 at 10:47AM

Better-than-expected earnings are giving it a boost.

Shares of Verra Mobility (VRRM -1.28%) are rising today, up 7.6% as of 11 a.m. EDT, after the smart-infrastructure provider reported first-quarter earnings that beat Wall Street's estimates.

Verra's earnings and revenue both beat Wall Street's consensus estimates, which had called for a net profit of $0.02 per share on revenue of $105.43 million.

In a statement, the smart-infrastructure specialist said that its operating results for the quarter were affected by the outbreak of COVID-19, which has had a negative impact on rental-car companies that use its technology. 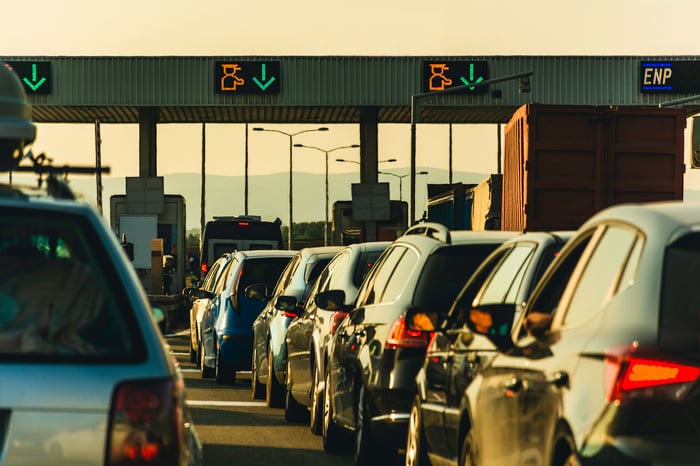 Verra's commercial services segment provides automated toll-paying and other solutions to vehicle-fleet operators, including daily rental companies. Its operating profit fell 12% from a year ago, to $33.4 million.

That profit decline was more than offset by big growth for the company's government solutions segment, which sells photo-enforcement systems to school districts and city governments. Its operating profit rose 61% from a year ago, to $21.2 million.

Verra generated $14.8 million in net cash flow from operations in the quarter. As of March 31, the company had $113.6 million in cash, plus an undrawn $75 million line of credit, versus total debt of $872.5 million.

Verra declined to give specific guidance for the year, but during its earnings call, CEO David Roberts noted that the rental-car industry was down roughly 80% in April. He said that investors should expect a similar impact to Verra's revenue from those companies for the second quarter, and "significant compression" for the remainder of 2020.

Roberts said the outlook is brighter for its government solutions business, which he expects will return to normal levels in the second half of 2020.