Please ensure Javascript is enabled for purposes of website accessibility
Log In Help Join The Motley Fool
Free Article Join Over 1 Million Premium Members And Get More In-Depth Stock Guidance and Research
By Leo Sun - May 14, 2020 at 10:19AM

The optical solutions provider posted a messy quarter, but a fresh upgrade cycle looms on the horizon.

Infinera expects its adjusted revenue to rise 1%-8% annually in the second quarter, but it didn't provide any earnings guidance. CEO Tom Fallon admitted the macro headwinds were creating "visibility challenges for the second half of the year," but he remained "very optimistic" regarding Infinera's "medium and long term" opportunities.

Did investors overreact to Infinera's earnings miss? Or is it finally time to give up on this unloved stock, which has plunged nearly 80% over the past five years? 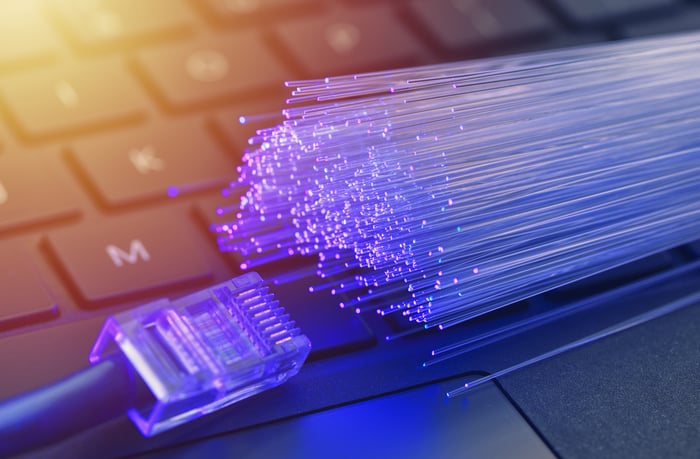 Current fiber networks operate at 100G to 200G speeds over long distances, and 400G to 600G speeds at short distances. Infinera's new ICE6 products, which are set to launch later this year, will introduce 800G speeds to address the surging usage of cloud and streaming services.

Infinera once generated most of its revenue from long-distance products, but many customers prioritized shorter-distance (metro and data center) upgrades instead. The company acquired Coriant to boost its exposure to the short-range market in late 2018, then ramped up its development of 800G products to stay ahead of the curve.

However, Infinera's revenue boost from Coriant missed its own estimates, and it still faces fierce competition from large companies like Ciena (CIEN 0.22%) in the 800G market. A recent clash with an activist investor and a new $200 million debt offering also cast doubts on its long-term plans.

Infinera's revenue growth decelerated after it lapped the Coriant acquisition, and its gross and operating margins both contracted sharply in the first quarter:

Infinera claims the COVID-19 crisis throttled its production and delivery capabilities in the second half of the first quarter. It also notes that an unexpected shift in its customer mix boosted its revenue at the expense of its margins.

Specifically, it booked revenue from a major Tier 1 subsea contract ahead of schedule. The initial rollout mainly used Infinera's lower-margin components, which reduced its gross margin by 300 basis points. That compression was exacerbated by higher shipments of lower-margin 200G products.

Infinera anticipated the increase in 200G shipments, but originally expected the ramp up of its higher-margin 600G and 800G products to offset that margin compression. The pandemic disrupted those supply chains and forced it to rely on lower-margin revenue instead.

But how long will the disruption last?

For the second quarter, Infinera expects a non-GAAP gross margin of about 33% and an operating margin of -4%. That expansion indicates Infinera's margins were only temporarily compressed by COVID-19, rather than competition from Ciena, which is also targeting the 800G space with its WaveLogic modems.

During the conference call, Fallon claimed Infinera's solutions, especially when paired with newer technologies like XR optics (which optimize connections), are cheaper and faster than comparable solutions from its "narrowing set of viable competitors."

However, Fallon also warned that Infinera saw "less clarity" with its demand in the second half of the year as its customers "assess the economic impacts" of COVID-19. In other words, the upgrade cycle could be extended as Infinera's core customers postpone their upgrades to conserve cash.

Is it time to give up on Infinera?

Infinera is a cyclical stock, and it's closer to a trough than a peak. Its first-quarter numbers were disappointing, but its margin compression was caused by supply chain disruptions and shifted orders instead of competition or execution problems. It also remains focused on the upcoming ramp of its ICE6 800G products.

Infinera's stock probably won't rally until it proves those points, but it remains dirt cheap at less than one times its annual revenue. That low valuation should limit its downside potential, and its low enterprise value of $1.4 billion makes it a tempting takeover target for bigger optical players like Ciena. Simply put, investors who give up on Infinera now could regret that decision in the near future.