Please ensure Javascript is enabled for purposes of website accessibility
Log In Help Join The Motley Fool
Free Article Join Over 1 Million Premium Members And Get More In-Depth Stock Guidance and Research
By Lawrence Rothman, CFA – May 14, 2020 at 9:15AM

Marriott's shares have been hard hit due to the effects of the coronavirus. Is now the time to pick up shares?

Clearly, the coronavirus pandemic, with widespread business closures and stay-at-home orders around the globe, has affected Marriott International's (MAR 3.48%) results. Marriott has worldwide operations, and the disease initially hurt the company's Asian operations and subsequently its other regions, including its North American business, as state and local governments ordered people to stay home and forced non-essential businesses to close their doors. In the United States, the Centers for Disease Control and Prevention continues to recommend staying home as much as possible and avoiding unnecessary travel.

Hence, it's not surprising that Marriott's first-quarter results saw revenue fall by 7% year over year and GAAP diluted earnings per share drop by more than 90%. While management cannot estimate COVID-19's impact on future results, it stated the illness will have a material and greater effect. No one knows how long the pandemic and government's restrictive rules will last, but certainly, Marriott's second-quarter results will continue to show the negative consequences.

Under present conditions, it's no wonder the share price is down some 40% from the mid-$140 range since late February. After the marked price drop, should you scoop up shares? 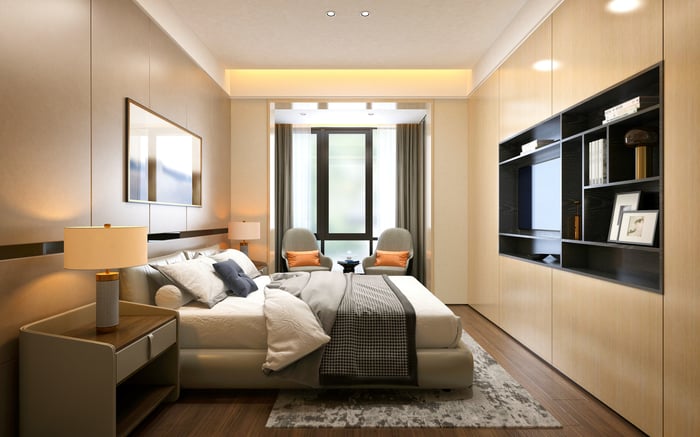 Marriott has about 1.4 million rooms. Out of this total, it franchised 58% and operated 41% under management agreements. It only owns 1% of its rooms. Under a franchise arrangement, the franchisees pay Marriott an upfront fee plus an ongoing royalty based on room and food/beverage revenue. The management agreements, which are initially 20 to 30 years, pay the company a base fee that is a percentage of the hotel's revenue, and Marriott has the opportunity to earn an incentive fee, which is a percentage of the property's profit. The property owner also reimburses the company for costs to operate the hotel.

With over half of its rooms part of the higher-end luxury or premium hotel segment, Marriott's bookings are certainly economically sensitive. However, while the company's revenue will feel the effects of the economic downturn, its franchise and management agreements give the company more flexibility during these times. That's because it's not stuck with large, fixed hotel operating expenses and capital expenditures since Marriott doesn't own most of its hotels.

Marriott acquired Starwood Hotels & Resort in 2016, greatly expanding its geographic reach. The year before it completed the deal, less than 25% of its rooms were outside of North America, a number that increased to nearly one-third at the end of 2016, about the same level at the end of the first quarter. This will increase since more than half of the company's development is outside of North America.

With countries opening up at different rates and economies recovering at a varying pace, its global presence will benefit Marriott. The company's revenue per available room (RevPAR), a key metric for lodging companies, fell by more than 22% after getting off to a good start in the first two months of the first quarter, excluding the Asia Pacific region.

In March, as news of the virus' spread caused shutdowns, worldwide RevPAR fell by 60% year over year; it was down 57% in North America, 74% in the Asia Pacific, and 66% in the Europe Middle East. However, showing the benefits of geographic diversity, China's RevPAR showed improvement throughout the quarter, driven by occupancy going from less than 10% in mid-February to 25% in April.

No one knows how quickly economies around the world will recover as governments lift stay-at-home orders. Marriott's global presence is a source of comfort, though.

Marriott has been keeping on eye on the cash till, which takes on increased importance during difficult times. The company ended the first quarter with $1.8 billion in cash, up from $225 million at year-end. It did increase its debt from $10.9 billion to $12.2 billion.

Subsequently, Marriott issued another $1.6 billion in debt and raised $920 million in cash after it amended its co-branding agreement with JPMorgan Chase (JPM 1.80%) and American Express (AXP 1.35%).

Marriott's CFO, Leeny Oberg, stated on the first-quarter earnings call that, "... at these extraordinarily low levels of RevPAR, we assume net cash outflows of roughly $90 million to $95 million per month." In other words, even assuming no improvement in business, the company has more than a year's worth of cash.

Marriott was able to cut expenses and capital expenses quickly. Along with its global presence and plenty of liquidity, the company will make it through the pandemic. With the stock price at this level, long-term investors will find the company a compelling opportunity.