Please ensure Javascript is enabled for purposes of website accessibility
Log In Help Join The Motley Fool
Free Article Join Over 1 Million Premium Members And Get More In-Depth Stock Guidance and Research
By Leo Sun - May 16, 2020 at 12:23PM

This tech stock could stay in a holding pattern until its networking business passes a cyclical trough.

Cisco's (CSCO 1.55%) stock recently rallied after the networking giant posted its third-quarter numbers. Will its high yield and low valuation make Cisco a safe-haven stock for a turbulent market? Let's dig deeper to see whether investors should chase its post-earnings rally.

Cisco's growth was tepid, but the trade war and COVID-19 crisis had significantly lowered investors' expectations. Its stock remains down about 15% over the past 12 months, but it pays a forward dividend yield of roughly 3.3% and trades around 13 times forward earnings.

However, that growth spurt ended at the beginning of fiscal 2020. Sales of its infrastructure products (routers and switches) declined as the upgrade cycle cooled, and the trade war caused China to bar Cisco from bidding on major state-backed contracts. The COVID-19 crisis exacerbated the pain by disrupting supply chains and orders.

Cisco aggressively repurchased its shares throughout the slowdown, which enabled it to generate positive EPS growth even as its revenue growth stalled out. But that trend won't continue in the fourth quarter: Cisco expects its revenue to drop 8.5%-11.5%, and for its adjusted EPS to slide 11%-13%.

Cisco's infrastructure revenue fell 15% annually in the third quarter and accounted for 54% of its top line. Demand for its enterprise, data center, and wireless products all declined, and the COVID-19 crisis disrupted its supply chains. 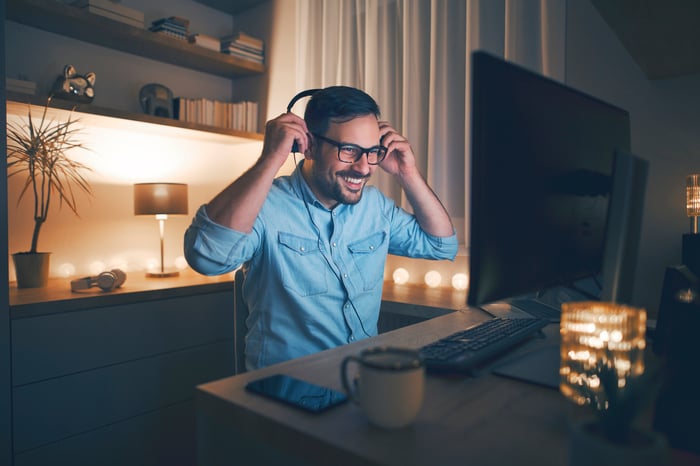 Its application revenue, which accounted for 11% of its top line, dipped 5% as weak demand for its Unified Communications and TP (TelePresence) endpoint products offset the stronger growth of its video conferencing products throughout the pandemic.

Cisco's security revenue rose 6% annually, but the unit only accounted for 6% of its top line. That smaller business, which was expanded with its Duo and Umbrella acquisitions, saw strong demand for its unified threat management, identity and access, and advanced threat products.

Cisco's services unit, which generated 28% of its revenue, posted 5% growth as it converted more software services into recurring subscriptions. Subscriptions accounted for 74% of its software revenue during the quarter, up nine points from a year earlier, and indicated Cisco was locking more customers into its ecosystem.

Is Cisco approaching a cyclical trough?

Cisco's hardware and application revenue could continue declining over the next few quarters, so it probably hasn't hit a cyclical trough yet. However, its non-GAAP gross and operating margins expanded both sequentially and annually during the quarter.

That expansion indicates Cisco's scale still gives it a wide moat against rivals like Arista Networks (ANET 0.66%) and Juniper Networks (JNPR 0.59%). Cisco attributed its gross margin expansion to its increased productivity, low memory prices, and a positive mix of higher-margin products. By comparison, Arista and Juniper posted non-GAAP gross margins of 65.6% and 59.6%, respectively, in their latest quarters.

However, Cisco expects its margins to contract in the fourth quarter, with a gross margin of 64%-65% and an operating margin of 31.5%-32.5%. Its margins could continue declining into fiscal 2021, but they could rebound quickly after the pandemic passes and its larger customers resume their upgrades.

During the conference call, CFO Kelly Kramer admitted Cisco was struggling to lock customers into longer-term contracts amid the COVID-19 headwinds, but noted its core infrastructure unit was still a "very solid business." Kramer also noted Cisco has "gone through cycles like this before and we always come out pretty strong."

Cisco will likely remain in a holding pattern for now. It ended the third quarter with $28.6 billion in cash and equivalents and operating cash flow of $4.2 billion, so it still has plenty of room for buybacks and dividends. However, those measures will merely help Cisco tread water as its core business endures tougher headwinds over the next few quarters.

Until Cisco presents clearer signs of a cyclical bottom, its upside potential will be limited -- although its valuation and dividend should set a floor under the stock. In short, Cisco is a safe stock to own for its dividend, but investors who chase its post-earnings rally might be disappointed when the stock underperforms the market.