Please ensure Javascript is enabled for purposes of website accessibility
Log In Help Join The Motley Fool
Free Article Join Over 1 Million Premium Members And Get More In-Depth Stock Guidance and Research
By Reuben Gregg Brewer - May 16, 2020 at 11:22AM

Looking at gold stocks for diversification? Don't settle for miners.

Gold is a volatile commodity prone to swift and dramatic price swings, but it often does well when other investment options are souring. Because of this fact, investors often like to have a small amount of gold exposure in their portfolios to increase diversification. If that sounds like a good idea today, then take a closer look at Royal Gold (RGLD -2.39%), Franco-Nevada (FNV -1.00%), and Wheaton Precious Metals (NYSE: WPM). They are tied to gold, but aren't miners -- and that's a positive.

Streaming has its benefits

Royal Gold likes to point out that it produces a huge amount of revenue with just a tiny staff of 23 people. It generated roughly $18.4 million of revenue per employee in 2019. Compare that to, say, tech giant Alphabet, which makes closer to $1.5 million per employee. How could an $8.4 billion market cap company be so productive? The answer is in the business model -- Royal Gold is a streaming company. 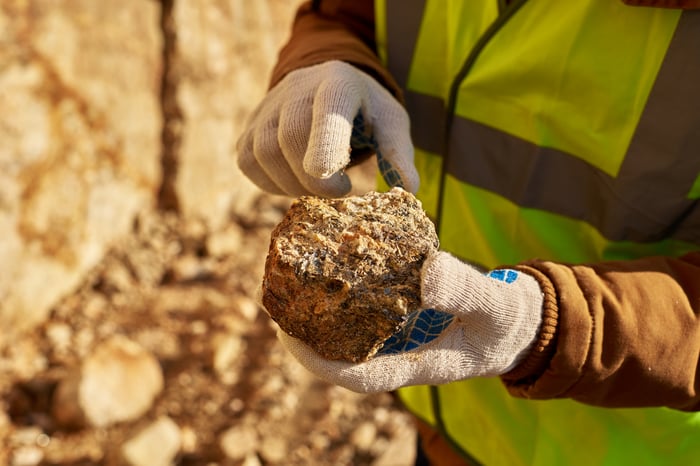 To simplify, streaming companies like Royal Gold, Franco-Nevada, and Wheaton give miners cash up front for the right to buy precious metals in the future at reduced rates. The miners get access to cash that doesn't involve tapping the capital markets, and the streaming companies contractually lock in low prices. Both win in their own ways. This isn't an employee-intensive business, since the miners are doing all of the work. The streaming companies simply need to have enough employees to vet investment options and monitor their portfolio of streaming deals.

However, there's more to like here than just low overhead costs. Those locked-in low prices create material value for the streamers. For example, in the first quarter of 2020, Wheaton Precious Metals paid just $426 an ounce for gold, $4.50 an ounce for silver, and $402 per ounce of palladium. Gold currently sells for around $1,700 an ounce, silver $15.50, and palladium $1,850. You can see the benefit here. But those low prices don't change much even when commodity prices are falling, so streamers generally have high margins whether gold prices are high (like today) or low. That's not true of miners, which can have terrific margins in the good times, but often awful ones when commodity prices fall. This is because they have to adjust their cost structures to handle the bad times, a difficult and time-consuming task that often requires shutting mines and laying off employees.

As you might expect, Wall Street isn't blind to the benefits of the streaming model. These companies often appear fairly expensive, and that's true today -- the S&P 500 Index is down around 10% so far in 2020, while Royal Gold is up 5%, Franco-Nevada 36%, and Wheaton 42%. For reference, giant precious metals miners Barrick Gold (GOLD -0.81%) and Newmont (NEM -1.68%) are up 40% and 43%, respectively. At this point, the price to book value ratio for Wheaton is the lowest in the streaming group at 3.6 times, while Newmont and Barrick come in at 2.3 times and 2.1 times, respectively. 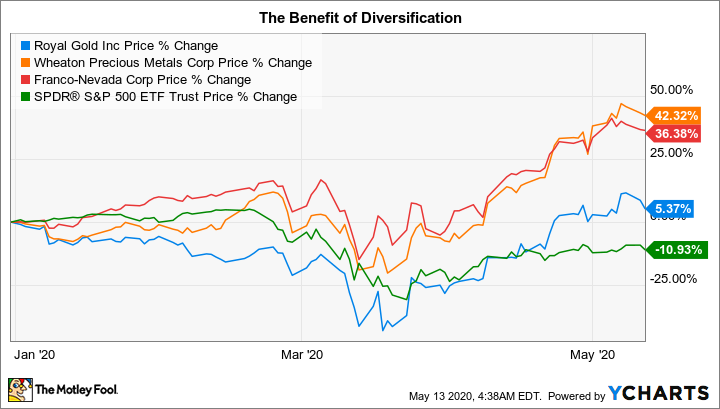 That premium may seem high today, but don't forget about the consistency of the streaming model. During the last commodity downturn, Barrick and Newmont both saw their EBITDA margins dip into negative territory. The EBITDA margins of Royal Gold, Franco-Nevada, and Wheaton remained soundly in positive territory. Put simply, their businesses held up better in the face of adversity -- just like you'd expect. That is probably worth a premium. 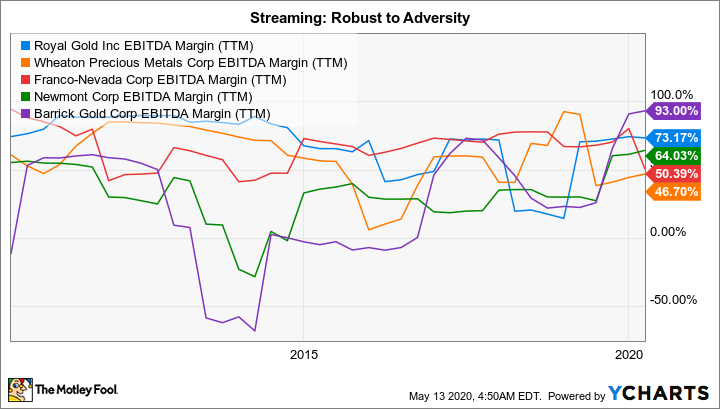 To be fair, streaming companies aren't immune to bad times or bad events. Their top and bottom lines will go up and down with the price of precious metals. And if a mine in which they have a streaming interest shuts for some reason (be it a strike, mine accident, or COVID-19-related closure) they stop receiving gold just like the miner that operates the asset. And sometimes they make investments in development projects that don't end up getting built, or that don't live up to expectations. In other words, the streaming model helps to mitigate risk, it doesn't eliminate it. But with precious metal prices high today, having a little extra downside protection is probably a good call.

Royal Gold, Franco-Nevada, and Wheaton have different exposures to precious metals and different approaches to building their portfolios of streaming deals. For example, Wheaton focuses on a smaller number of large deals, while Royal Gold and Franco-Nevada prefer broad diversification. However, now that you understand the inherent benefits of owning a streaming company, it is definitely time to dig in and get to know each of these companies a little better. If you are looking for the diversification benefit of precious metals today, these companies are a great way to get it.