Please ensure Javascript is enabled for purposes of website accessibility
Log In Help Join The Motley Fool
Free Article Join Over 1 Million Premium Members And Get More In-Depth Stock Guidance and Research
By Prosper Junior Bakiny - May 17, 2020 at 12:27PM

These two diabetes companies have been beating the market all year long, but that’s not the only reason you should consider investing in them.

Diabetes is a severe chronic health condition that affects about 34.2 million people in the U.S. alone, which represents approximately 10% of the country's population. Many more people -- an estimated one in three Americans -- are at risk of developing diabetes.

Fortunately, many companies develop products, like drugs and insulin pumps, that help meet the needs of diabetics. Tandem Diabetes Care (TNDM) and Eli Lilly (LLY) are two such companies. Here's why both of these healthcare stocks are worth buying, even given today's highly uncertain economic conditions. 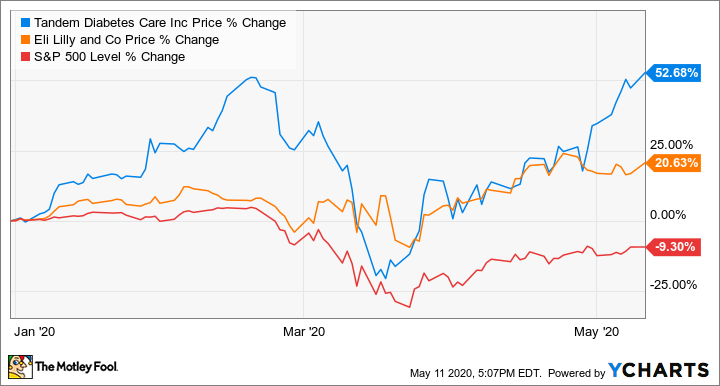 Tandem Diabetes' business hasn't been hit hard by the ongoing pandemic, and the company said as much in a press release on its website on March 11. "Our manufacturing and warehouse facilities continue to operate as normal, as healthcare operations are deemed critical by the State, so that we can provide products and supplies to Tandem customers around the world," said management. Tandem Diabetes' first-quarter results drove this point home. During the quarter, the company posted sales of $97.9 million, representing a 48% year-over-year increase.

Also, Tandem Diabetes' worldwide shipment of insulin pumps grew by 18% year over year to 17,378. And while Tandem Diabetes remains unprofitable, the company's net loss per share shrunk to $0.25 from the $0.40 recorded during the prior-year quarter.

The medical devices company has its crown jewel, the t:slim X2 insulin pump, to thank for its continued success. As Tandem Diabetes' CFO, Leigh Vosseller, said during the company's first-quarter earnings conference call: "Our success is a direct result of the growing demand for t:slim X2 and all of the benefits it offers." 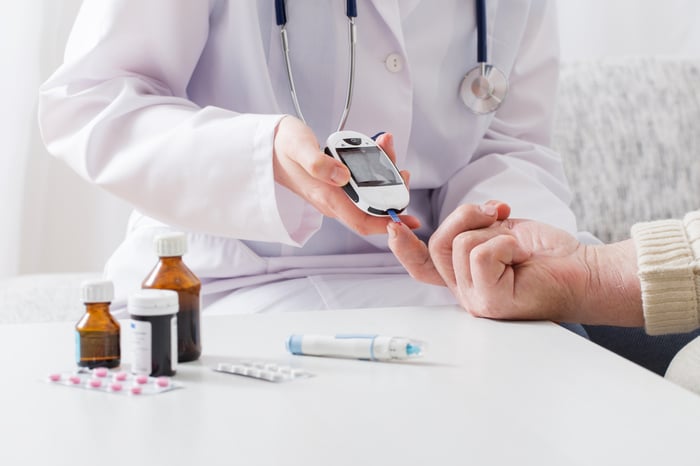 One of those benefits is ease of use. Tandem Diabetes has consistently come up with innovations to improve its t:slim X2. For instance, it was the first of its kind to have a touch screen or to allow for remote software updates. Tandem Diabetes' motto for its t:slim X2 is "the pump that gets updated, not outdated."

The t:slim X2 can also keep track of the blood sugar level of patients and predict whether it will fall above or below some threshold. Based on this prediction, the device can automatically adjust the amount of insulin it delivers.

Investing in Tandem Diabetes is an excellent way to profit from this trend. The company's revenue and earnings -- as well as its stock price -- will likely continue to increase as it makes headway within this market.

Eli Lilly boasts a strong lineup of diabetes treatments. The best-selling of the bunch is Trulicity, whose sales continue to grow rapidly. During the company's first quarter, Eli Lilly racked up $1.2 billion in revenue from Trulicity, a 40% year over year increase.

Finally, there's Basaglar -- yet another insulin product -- and Jardiance, an oral diabetes medicine. During the first quarter, revenue from Basaglar increased by 21% year over year to $303.7 million, while Eli Lilly recorded revenue of $267.5 million from Jardiance, representing a 31% increase year over year.

Naturally, Eli Lilly does market medicines for other conditions. One of the most promising of the bunch is Taltz, an immunosuppressant whose revenue soared by 76% during the first quarter to $443.5 million. Also, Eli Lilly's cancer treatment Alimta generated $560.1 million in revenue during its latest reported quarter, a 12% year over year increase.

With many of its diabetes and non-diabetes medicines performing well, Eli Lilly had a great first quarter. The healthcare stock's total revenue was $5.9 billion, up 15% compared to the first quarter of 2019. Also, the company's non-GAAP earnings per share (EPS) increased by 32% year over year to $1.75. Eli Lilly's financial results actually benefited from the pandemic, with the company stating that its revenue increased by around $250 million due to "customer buying patterns and patient prescription trends resulting from the COVID-19 pandemic."

This trend is set to continue, which is why the pharma giant decided to adjust its guidance for the fiscal year 2020. Eli Lilly had previously announced that its non-GAAP EPS for 2020 would be in the range of $6.70 to $6.80, but the company now expects a range between $6.70 to $6.90.

I expect Eli Lilly's strong performance to persist beyond 2020 thanks to its strong lineup of medicines and its rich pipeline, which currently includes more than two dozen products. Investors would do well to buy the company's shares today.