Please ensure Javascript is enabled for purposes of website accessibility
Log In Help Join The Motley Fool
Free Article Join Over 1 Million Premium Members And Get More In-Depth Stock Guidance and Research
By Bram Berkowitz – May 17, 2020 at 1:09PM

The bank has been investing in technology over the last decade, and those initiatives seem to be paying off.

The $71-billion-asset Zions Bancorporation (ZION -1.44%) is coming off of a difficult quarter in which the bank reported net income of only $14 million, a 93% reduction from the $213 million in profit Zions reported in the first quarter of 2019. Headquartered in Salt Lake City, Utah, Zions operates primarily in 12 states on the West Coast, focusing on traditional banking products for small- and medium-sized businesses. Although the bank's credit quality should be watched closely given its loan composition, several factors really excite me about this bank. 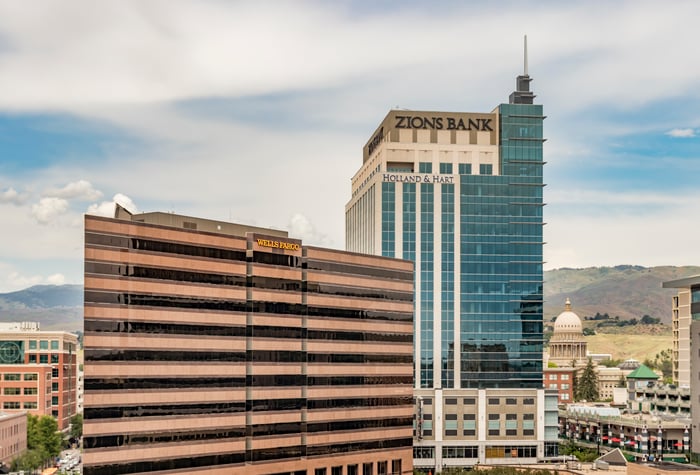 Profits were derailed in the first quarter of 2020 after Zions set aside a whopping $258 million to prepare for future loan losses brought on by the coronavirus pandemic. That credit provision is up from just $4 million in the first quarter of 2019. Part of the reason for the massive provision is that commercial loans make up nearly 76% of the bank's total loan book, while roughly 31% of loans are commercial and industrial loans.

"Well, I would add commercial real estate in the retail sector is getting hit pretty hard with renegotiated leases by small tenants and even some of the credit national tenants now are retrading or trying to retrade lease agreements," Zions chief credit officer Michael Morris said on the company's most recent earnings call.

As you can see below, Zions commercial real estate and C&I loan mixes would have loss rates of 2.7% and 2.2% if you apply loss rate scenarios at the bank from the Great Recession. 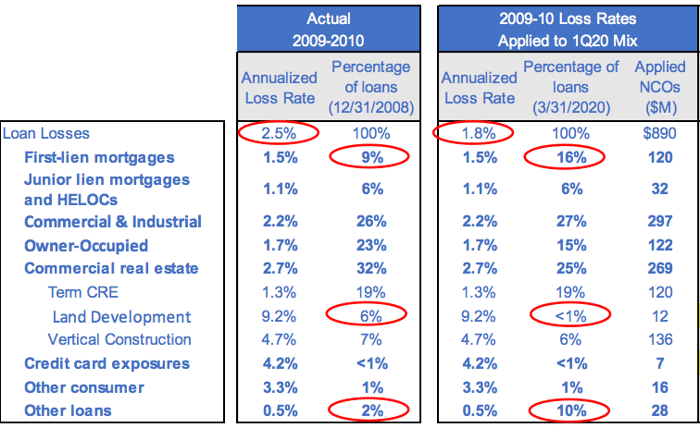 Another 5% of the bank's loans are tied up in oil- and gas-related loans. But the bank does have a $14 billion securities portfolio composed of safer and more liquid investments. It also has a strong common equity tier 1 (CET1) capital ratio (core capital to total risk-weighted assets) for a regional bank at 10%, which is in the top half of its peer banks. 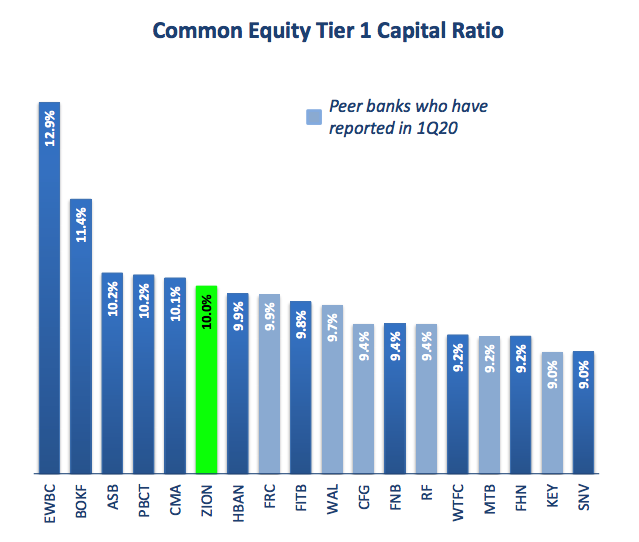 What excites me about Zions are the investments the bank has made in technology in recent years. Over the last 10 years, the bank has been working on replacing its core loan and deposit systems with a more modern, digital system. Many banks are known for using archaic core processing systems, which process daily transactions, developed decades ago. In 2019, Zions successfully converted its loans to a new system, and it expects to complete its final phase, converting its deposit system, in 2022.

"Replacing core loan and deposit systems is very tedious, hard work. We believe it's something that almost all banks will be faced with in the next few years," Chairman and CEO Harris Simmons said in Zions' 2019 annual report. "In fact, in recent months we've seen several announcements by major banks that they're evaluating the replacement of some of their core systems. We're pleased to be ahead of the pack."

But with more than just talk, Zions is proving that its investments are paying off. In round one of the Paycheck Protection Program (PPP), the bank processed more than 14,000 loans totaling $4.4 billion in volume. That ranked Zions as the ninth leading institution in the PPP program by total dollar volume processed. In terms of total assets, Zions ranked as the 40th-largest U.S. bank at the end of 2019, according to data from the Navis Group, showing that the bank is punching above its weight.

Zions said it would reap $118 million in origination fees from the $4.4 billion in PPP loans. The bank also disclosed that prior to round two of the PPP, it had an additional $2 billion of PPP loans in the pipeline.

Zions president and COO Scott McLean attributed the success in the PPP program to the bank's development of digital customer-facing technology and automation. For instance, obtaining credit information for a loan applicant is much easier because the bank's new core system can retrieve a customer's IRS tax information requirements, employment verification, and bank statement information, he said.

Savings from the bank's tech upgrades are already beginning to materialize. The bank's efficiency ratio, a measure of a bank's expenses versus revenue, dropped to 57.7% after the first quarter, down from above 60% in the first quarter of 2019.

I am a little concerned about the hefty provision Zions took after the first quarter and the heavy commercial weighting in its loan portfolio. But given its solid capital position, I think the bank can weather the storm. The investments in technology are very exciting, especially when you look at what Zions has been able to accomplish in the PPP program. As the pandemic accelerates the transition to digital, Zions is well positioned to hit the ground running once the pandemic subsides.