Please ensure Javascript is enabled for purposes of website accessibility
Log In Help Join The Motley Fool
Free Article Join Over 1 Million Premium Members And Get More In-Depth Stock Guidance and Research
By Reuben Gregg Brewer - May 17, 2020 at 10:34AM

What did Emerson really tell investors when it reduced its full-year guidance? Here's a look at the math that shows just how bad things are.

Like so many companies reporting lately, Emerson Electric's (EMR 1.98%) most recent earnings results weren't exactly sterling. The coronavirus's impact on the global economy has been widespread. However, the company's efforts to rein in investor expectations by lowering its full-year guidance doesn't do justice to the problems the industrial giant faces. Here's a deeper dive that shows the full extent of what Emerson was telling investors.

The global effort to slow the spread of COVID-19 has largely centered around asking people to stay home and forcing nonessential businesses to close. Effectively, large swaths of the world have been economically shut down for an extended period of time. The impact is already starting to show up in the GDP numbers, with the U.S. falling from an annualized growth rate of 2.1% in Q4 2019 to a decline of 4.8% in Q1 2020. And the United States wasn't even shuttered for the whole quarter. Worse, economists expect the decline to steepen as the data sets involved get finalized in the coming weeks and months. The U.S. isn't alone. 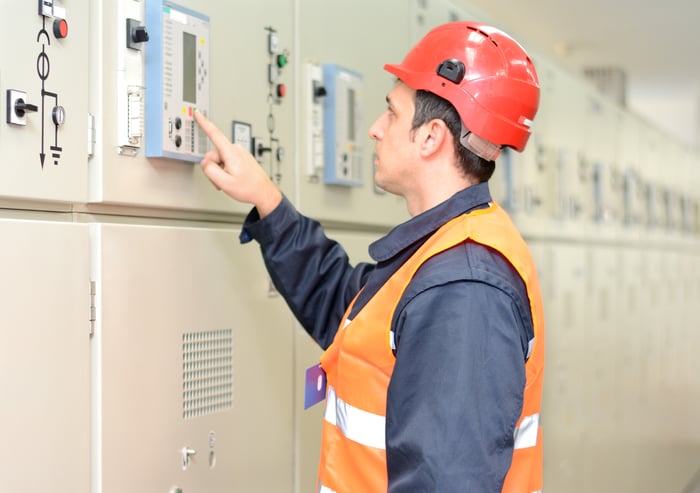 That's a terrible backdrop for any company, let alone a cyclical industrial business like Emerson that tends to do well when economies are expanding and relatively poorly when they are contracting. Thus, few were surprised to see the company's underlying sales decline 7% when it reported fiscal second-quarter earnings in late April. Although cost-cutting allowed Emerson to report flat earnings, it entered fiscal 2020 with much higher expectations. At the end of fiscal 2019, guidance was for full-year adjusted earnings to be between $3.48 and $3.72 per share. After fiscal Q1, that range got bumped up to between $3.55 and $3.80.

In the wake of the COVID-19 pandemic, however, that momentum quickly changed as the world came to a screeching halt. Emerson lowered its guidance range for fiscal 2020 to between $3.00 and $3.20 per share when it announced Q2 earnings. On the surface it's easy to see that this is not a good outcome. The full year is going to fall well short of management's original expectations. But step back and do some math and you'll see just how bad this revision really is.

Digging below the surface

If you simply take the midpoint of the full-year numbers here, Emerson lowered its guidance range about 16% from its upwardly revised Q1 number and a touch under 15% from the number it pegged as it entered the year. That's not great, of course, but an economically sensitive company that can weather the massive global dislocations caused by COVID-19 with only a 15% or so hit to earnings goals is doing pretty well. However, that's really not the full story here, because half of Emerson's fiscal year is already over and only a small portion of it was impacted by the worldwide economic shutdown.

You need to look a bit more closely to see the real hit that management is warning investors about. The math here isn't complex. In fiscal Q1, Emerson posted adjusted earnings of $0.67 per share. In the second quarter, that figure was $0.89 per share. Add those two numbers together and you get $1.56 in adjusted earnings through the first half of fiscal 2020. The current midpoint of guidance is $3.10 for the year, so subtracting the first half from that figure means management is guiding for second-half earnings of $1.54 per share. Only a couple of cents difference, which isn't bad. 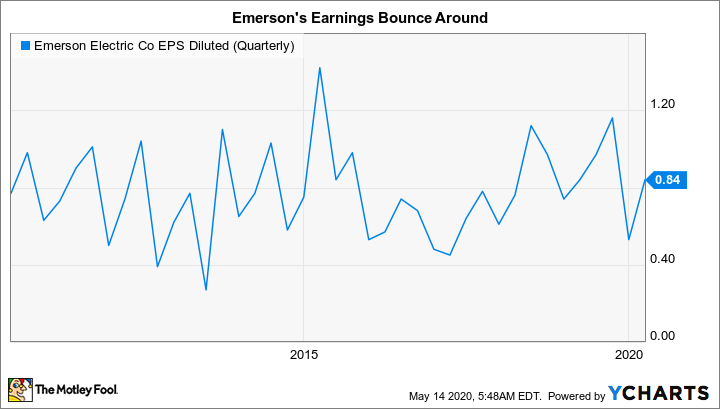 Only Emerson's earnings aren't smoothly distributed through the year. For example, in fiscal 2019 the company earned $0.94 per share (pulling out one-time items) in the third quarter and $1.07 in the fourth, for a total of $2.01 in the back half of the year. In 2020, when you do the math, the company is calling for $1.54. That's a year-over-year decline of a little under 25%. Sure, compared to the first half of 2019 the drop is barely 1%. But when you step back and look at the bigger picture, Emerson's outlook is much bleaker.

There's no particular reason for long-term investors to run for the hills if they own Emerson. It's dealing with the same difficult economic conditions as every other industrial company. And, for the most part, it's a financially strong and well-run business. That said, management is clearly warning that the second half of fiscal 2020 is going to be tougher than the first. And a little bit of math shows that, year over year, the comparisons could be pretty ugly. Be prepared for some volatility around that when the numbers come out.