Please ensure Javascript is enabled for purposes of website accessibility
Log In Help Join The Motley Fool
Free Article Join Over 1 Million Premium Members And Get More In-Depth Stock Guidance and Research
By Royston Yang – May 17, 2020 at 9:34AM

The owner of towers and communication sites has been growing its dividends at double-digit rates since 2012.

When you invest, it's a good idea to look out for stocks that pay out a consistent, growing dividend, rather than just gunning for capital gains alone. Dividend stocks should have a place in every income seeker's investment portfolio, as they don't just provide a passive source of cash inflow to add to your regular salary, but the growth rate of dividends helps to offset the corrosive effects of inflation. For retirees, this income flow becomes even more crucial as it provides a financial buffer and helps to keep up their lifestyles.

One of the ways to enjoy a sustainable, growing dividend is to invest in businesses that are growing their cash flows over time. Wireless technology, represented by cell towers, is one such sector. The explosion in the use of data makes towers a huge growth trend to watch out for. Real estate investment trusts, such as American Tower (AMT 0.37%), are mandated by law to pay out at least 90% of their annual taxable income to enjoy tax transparency. The company enjoys tailwinds from being in the right sector, while also paying out an increasing level of dividends each year.

American Tower's dividend stream has been a dream for income investors. Here's why. 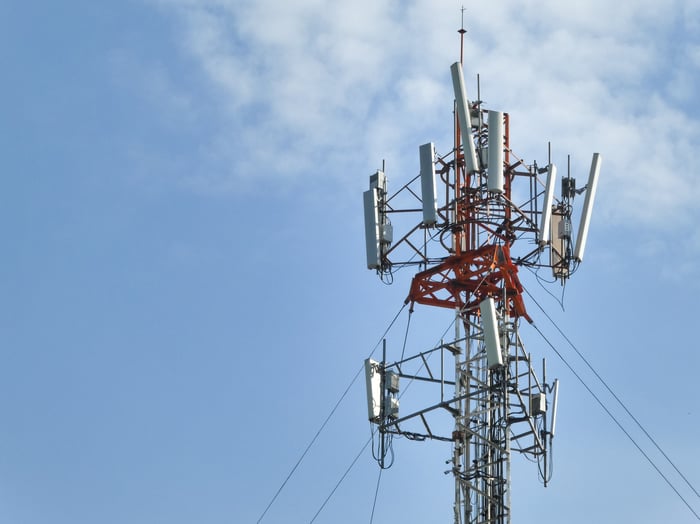 The chart below shows the increase in American Tower's annual dividends since 2012. From a low of $0.90, the annual dividend has more than quadrupled to $3.78 last year. The compound annual growth rate of dividends in the last seven years has been an impressive 22.8%. 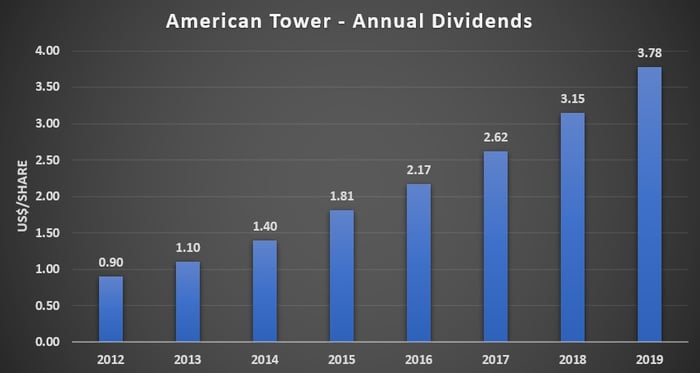 This growth has been driven by strong tailwinds in data usage, along with the growth in American Tower's portfolio of cell towers. Since 2015, the company has more than doubled its global portfolio of towers. Mobile data usage has exploded in the last five years as more people use smartphones, laptops, social media, and videoconferencing. These trends have intensified with the onset of the COVID-19 pandemic, as lockdowns and border closures force a large swath of people to work and study from home.

Aside from the tailwinds mentioned above, investors should also note that American Tower's leases are long-term ones with built-in contractual rent escalations. The leases are typically for a non-cancellable initial term of five to ten years with multiple renewal terms. Rent escalations are based on a fixed escalation percentage (averaging around 3% in the U.S.), an inflation index (in international markets), or a combination of both. These characteristics confer predictability in the company's rental revenue and cash flows.

Historically, American Tower has experienced low churn rates of around 1% to 2%, though this rate briefly spiked up to 7% in the fiscal year 2019 due to carrier consolidation in India. Top tenants for the company include large, reputable names such as AT&T (T 0.61%), Verizon (VZ 0.59%), T-Mobile (TMUS -0.09%) and Sprint Corporation.

Low churn rates and reputable tenants mean that investors can enjoy a peaceful night's sleep, knowing that there is certainty in the receipt of their dividends.

5G represents the fifth generation of mobile networking and connectivity technology. This technology is touted to be up to 100 times faster than 4G and is set to revolutionize the way we work, play, and live. Tom Bartlett, CEO of American Tower, mentioned in the company's latest conference call that additional equipment is expected to be deployed on tower sites as wireless carriers accelerate the rollout of 5G over the next few years.

With tenants increasing their capital expenditures for 5G, American Tower expects net operating income yields and returns on invested capital to show further improvement. This migration from 4G to 5G won't happen overnight, though. He believes that a "tremendous amount of complex equipment" will end up on the company's towers across the U.S. over the next five to ten years, thereby allowing American Tower to continue to prosper.

American Tower has increased its tower counts significantly over the last four years, from just 100,131 at the start of 2016 to 177,746 by the end of 2019. Most of these towers were acquired rather than built, with 78.3% of the acquisitions coming from Asia. With the transition from 4G to 5G being a major growth catalyst in many parts of the world as well, the company's global acquisitions stand it in good stead to continue growing its revenue base and, consequently, its dividend payments.

The dream is still alive

For dividend investors, the dream of higher dividends from American Tower remains very much alive. With multiple tailwinds boosting the company's business, you should feel confident that it can continue to grow its dividends over the long term.