Please ensure Javascript is enabled for purposes of website accessibility
Log In Help Join The Motley Fool
Free Article Join Over 1 Million Premium Members And Get More In-Depth Stock Guidance and Research
By Timothy Green - May 18, 2020 at 2:02PM

The Dow Jones Industrial Average (^DJI -1.56%) had surged 3.4% by 12:50 p.m. EDT Monday. The rally was likely driven by two pieces of news. First, Federal Reserve Chairman Jerome Powell said in an interview on 60 Minutes that the Fed was "not out of ammunition by a long shot" as it combats the negative impact of the novel coronavirus pandemic. Second, an early-stage vaccine trial showed positive results.

Tech giants Microsoft (MSFT -3.17%) and Apple (AAPL -2.98%) underperformed the market on Monday, although both stocks still managed to rise. Microsoft announced a collaboration with FedEx (FDX -0.16%) to offer logistics solutions, and Apple plans to open more of its U.S. stores this week.

FedEx is not a huge fan of e-commerce giant Amazon.com. A Bloomberg article earlier this year described the company as "a kind of anti-Amazon ally for big-box retailers." FedEx founder Fred Smith expects the company's strategy, which involves strengthening relationships with brick-and-mortar retailers, to allow it to overtake rival UPS within the next few years. 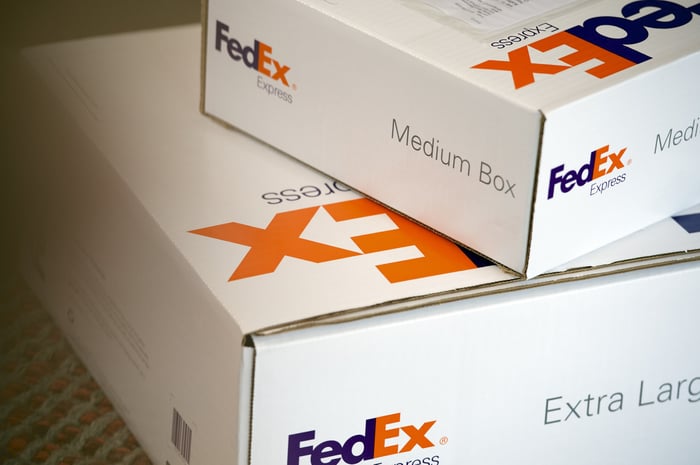 FedEx will get some help from a logical source, given its anti-Amazon slant. On Monday, FedEx and Microsoft announced a multi-year collaboration that will combine FedEx's logistics capabilities with Microsoft's cloud technology. Joint offerings will be developed for customers using Microsoft Azure and Dynamics 365, with the goal being to "reinvent the most critical aspects of the commerce experience and enable businesses to better compete in today's increasingly digital landscape."

The first solution to emerge from this partnership is FedEx Surround, which aims to use data and near-real-time analytics to improve supply chain visibility. The solution is particularly well suited for businesses that depend on time-sensitive deliveries. Two examples given in the announcement: "...a hospital may urgently need a package to help save a life, or a part may need rapid transport to a manufacturing facility to avoid an operational shutdown."

Microsoft has grown its Azure cloud infrastructure business rapidly in recent years, putting it behind only Amazon Web Services in terms of market share. Microsoft's biggest advantage may be that it's not Amazon. A company like FedEx, which is increasingly competing with Amazon as the e-commerce giant builds out its own logistics capabilities, certainly isn't going to turn to Amazon for cloud computing capabilities if it has an alternative option.

Shares of Microsoft were up just 1.1% by early Monday afternoon, trailing the broader market substantially. However, the stock has performed well in recent weeks, and it's close to surpassing its 52-week high.

With the economy being reopened in many U.S. states, Apple is slowly reopening its retail stores to the public. The tech giant plans to open more than 25 of its stores in the U.S. this week, adding to stores it has already reopened around the world. Around 20% of its global retail stores have been reopened at this point, including five in the U.S. that were opened last week.

The closing of many retail stores across the U.S. due to the pandemic has greatly impacted demand for Apple's products. Last week, data from KeyBanc Capital Markets indicated that U.S. iPhone sales tumbled 77% in April compared to the prior-year period. Sales were down 56% from March.

As retail stores reopen, Apple should see a rebound in demand. However, with the U.S. economy deeply depressed and unlikely to fully recover anytime soon, demand for Apple's pricey gadgets may remain soft for quite some time. Shares of Apple were up 2.3% by early Monday afternoon.