Please ensure Javascript is enabled for purposes of website accessibility
Log In Help Join The Motley Fool
Free Article Join Over 1 Million Premium Members And Get More In-Depth Stock Guidance and Research
By Reuben Gregg Brewer - May 18, 2020 at 7:31AM

Tanger and Simon are struggling through a difficult period for malls, but Simon looks better positioned for the long term

There's no way to soften the COVID-19 story for mall real estate investment trusts (REITs). It is bad. So bad that Tanger Factory Outlet Centers (SKT 0.69%) cut its dividend after building a track record of 27 consecutive annual increases -- and it is one of the stronger names in the space, financially speaking.

But if you are looking at Tanger, or any other mall REIT, then you should strongly consider industry giant Simon Property Group (SPG 0.64%) as an alternative. Here's why.

Although size isn't always the most important thing when it comes to investing, a larger size can confer benefits. In this case, Simon is easily the mall REIT industry's giant, with more than 200 enclosed malls and factory outlet centers. By comparison, Tanger owns just 39 factory outlet centers. (Other players, like Macerich and Penn REIT, have similarly small portfolios.) 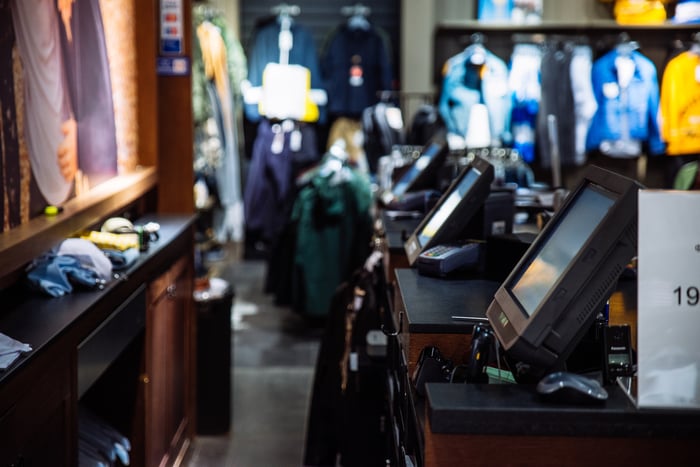 Certain property operating costs can't be spread around, like taxes and employee costs, but there are other important benefits to scale. For example, supplies can be bought in bulk, executive-level compensation is supported by more assets, and a bigger company will often have greater access to capital. That last one is probably the most important, particularly now, as shoring up liquidity has become vital. Despite the spread of the coronavirus, Simon was able to expand a credit facility from $4 billion to $6 billion in mid March. Much smaller Tanger merely drew down an existing credit facility in the face of the crisis. Simon's size essentially allowed it to go to its banks and get extra capital when it needed it.

There's more than just the largess of the banks at play here. Obviously, nobody would be happy lending extra money to a financially troubled real estate investment trust. But Simon is both large and fiscally conservative relative to peers. That includes Tanger, which also happens to have one of the stronger balance sheets in the niche. To put some numbers on that, Simon's financial debt to equity ratio is roughly 1.7 times, compared to Tanger's 4.5 times. Those ratios are up sharply from the end of 2019 because of steep share price declines, but the difference is pretty obvious. Meanwhile, Simon covers its trailing interest expenses roughly four times over, while Tanger comes in at just under one time. Again, the difficult environment has impacted those numbers, which were higher before COVID-19 led to the shutdown of malls. However, the difference is still notable, and Simon looks like the stronger name. 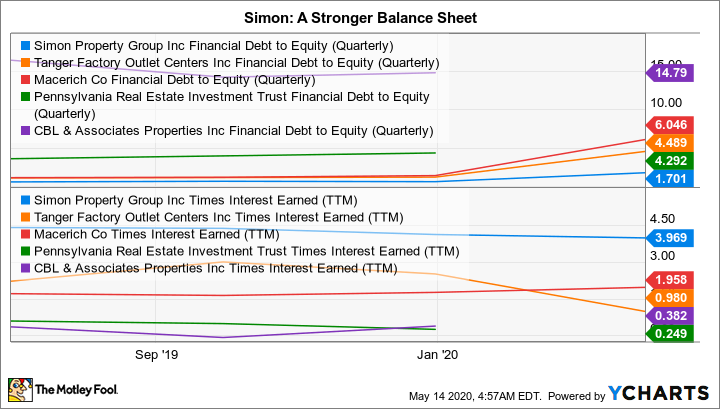 Another key benefit Simon offers investors is a larger and more varied portfolio. Tanger owns 39 factory outlet centers, so it's got all of its eggs in one basket. That basket, meanwhile, is fairly concentrated in a relatively small number of properties. Simon owns a touch over 100 enclosed malls, about 70 factory outlet centers, a collection of other domestic retail assets, and nearly 30 international mall properties. Obviously there's a size factor involved in this, but that diversification means that Simon isn't reliant on one property type, or even one country. It is easily the most diversified mall REIT, and far more diversified than Tanger. Right now, while times are tough, having more baskets in which to put your eggs is a net benefit.

As the largest and strongest company in the mall REIT space, Simon is looked at as a bellwether. That means that Simon is frequently asked to be the voice of the industry, bringing it into key discussions that others won't be privy to. Right now, that means access to government-level talks about how to reopen the economy. Specifically, Simon Property Group's CEO David Simon sits on the presidential committee that's been tasked with reopening the U.S. economy.

Further, peers will often imitate Simon's moves, allowing the giant mall REIT to take the first steps when things shift and change. That can provide the company with a first-mover's advantage. Yes, it also means Simon could be the first company to make an embarrassing misstep, but that's a risk worth taking when the issue is reopening an entire portfolio's worth of mall properties. In fact, peers quickly tagged along following Simon's announcement that it was starting the reopening process -- but Simon's malls got a lot more free press surrounding its big reopening plans.

The way to go in these troubling times

The current environment is hitting mall REITs very hard, and that includes both Tanger and Simon. Although Tanger is a well respected company with a storied history behind it, Simon simply appears to be better positioned to weather the tsunami that the mall REIT sector is facing today. In a better market, Tanger would be a worthwhile niche investment opportunity. Right now, though, safety needs to come first, and that means Simon.