Please ensure Javascript is enabled for purposes of website accessibility
Log In Help Join The Motley Fool
Free Article Join Over 1 Million Premium Members And Get More In-Depth Stock Guidance and Research
By Matthew Frankel, CFP® – Updated May 21, 2020 at 3:00PM

Hotel stocks, especially those with large, iconic properties, are one of the best-performing parts of the market.

Hotel stocks, especially those with large, group-focused properties, were among the market's best performers. Park Hotels & Resorts (PK 6.52%) was sharply higher, by more than 17%, while Host Hotels & Resorts (HST 2.66%) and Ryman Hospitality Group (RHP 3.99%) were higher by 16% and 14%, respectively. 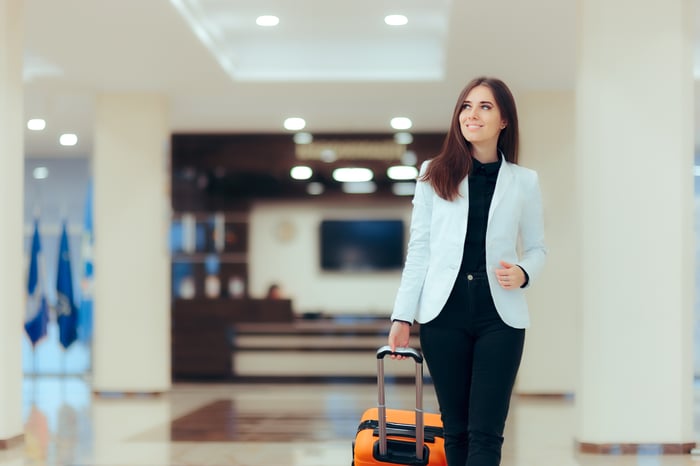 While there are some company-specific news items -- such as the disclosure of a newly initiated stake in Park Hotels by activist billionaire investor Bill Ackman -- the majority of today's gains can be attributed to positive coronavirus-related news.

Moderna (MRNA 3.98%) announced some early results from its coronavirus vaccine trial. The short version is that the vaccine candidate's early stage trial involved 45 participants, and all 45 of them developed antibodies to the virus -- even those who were given the smallest doses. There are more than 100 vaccines under development around the world, and several others are already in clinical trials, but Moderna's data is the first to be released from a human trial.

While this news is understandably causing overall sentiment to rise, you might be wondering why hotel stocks (and these three in particular) are getting such a boost.

One major factor to notice is that all three of these hotel stocks rely significantly on group business. Ryman is the most obvious example, as its Gaylord Hotels contain some of the largest convention spaces in the United States outside the casino industry. Park Hotels owns several major convention-oriented hotels under the Hilton brand, such as the New York Hilton Midtown, Hilton Chicago, and Hilton Orlando. And Host Hotels, the largest hotel real estate investment trust in the world, owns several iconic convention hotels like the Marriott Marquis San Diego Marina, the Orlando World Center Marriott, and many others.

Group business is highly sensitive not only to the economy, but also to concerns about the COVID-19 pandemic. Hotels rely on businesses being willing to spend money, which could certainly take a hit from a prolonged and deep recession. And group events are places where viruses can be easily transmitted -- this is why concerts, conventions, and other large gatherings were among the first things to get shut down as the pandemic worsened earlier this year.

The point is that groups have been canceling events ever since the COVID-19 pandemic hit. Through April 22, Ryman has experienced more than 860,000 room-night cancellations for future events, just to name one example. And many experts say that while demand might rebound somewhat as economies start to reopen, we likely won't see things truly return to normal until there's a readily available vaccine.

While we're a long way from the finish line in the fight against COVID-19, the positive results from Moderna's vaccine trial are certainly an encouraging sign that there's light at the end of the tunnel.

Why REITs Aren't Immune to the Market Crash