Please ensure Javascript is enabled for purposes of website accessibility
Log In Help Join The Motley Fool
Free Article Join Over 1 Million Premium Members And Get More In-Depth Stock Guidance and Research
By Matthew DiLallo - May 18, 2020 at 9:31AM

Occidental Petroleum's (OXY 2.70%) deal to sell its assets in Ghana to French oil giant Total (TTE 0.48%) has unraveled. Total called off the planned transaction after it wasn't able to acquire Occidental's assets in Algeria, which was a condition of the deal.

Occidental initially planned to flip its entire African portfolio to Total following its acquisition of Anadarko Petroleum for $8.8 billion. It was able to close the sale of its LNG assets in Mozambique last September for $3.9 billion. It also completed the sale of its exploration assets in South Africa. 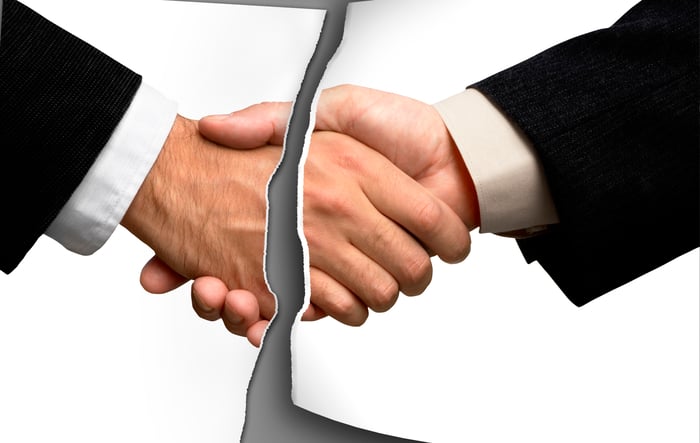 However, Algerian authorities blocked the sale of Occidental's assets in the country to Total. Meanwhile, a $500 million tax claim initially delayed the closing of the assets in Ghana. While the sides tried to work out a settlement, Total opted to walk away, given the significant deterioration in market conditions since it signed the initial purchase agreement.

Occidental now plans to retain ownership and continue operating in Algeria. However, it intends to sell its business in Ghana and will begin marketing them to third parties now that Total has officially walked away from the purchase.

The sale of Anadarko's African assets was a key piece of Occidental's debt reduction strategy. It initially aimed to sell up to $15 billion of assets to help pay down some of the debt it took on to buy Anadarko. With these African sales falling apart, Occidental no longer believes it can sell enough assets in the near-term to address its upcoming debt maturities. It has $6.4 billion due in 2021 and another $4.7 billion maturing in 2022. Because of that, the company is exploring alternative financing options so that it can manage its debt.