Please ensure Javascript is enabled for purposes of website accessibility
Log In Help Join The Motley Fool
Free Article Join Over 1 Million Premium Members And Get More In-Depth Stock Guidance and Research
By Eric Volkman - May 18, 2020 at 5:47PM

The Brazilian discount airline agrees to a government bailout...maybe.

On Friday, Brazil's state development bank said that the massive South American country's top three air carriers accepted an aid package worth 4 billion reais ($683 million) in total. There is some confusion about this: Subsequent to the announcement, all three denied they had given their assent.

Regardless, as negotiations on the matter were dragging for weeks, news of its possible closing came as a big relief to investors. The no. 3 out of that trio, budget carrier Azul (AZUL -5.63%), saw its shares climb by almost 33% higher on Monday. 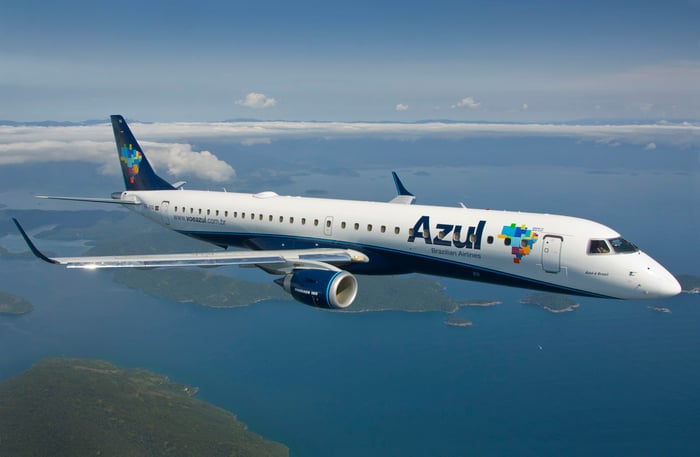 The parties might be at odds over bailout amounts and conditions, but what's indisputable is that the industry badly needs the help.

Even after reducing its planned capacity by 87% when the coronavirus outbreak started to hit, Azul saw serious drops in its April metrics. Revenue passenger kilometers (RPKs) dived by 90% year over year, while load factor (essentially the occupancy of its planes) dropped to 68.8%; in April 2019 this was 84.4%.

The coronavirus stalled Azul's operations. In its Q1, it actually managed to grow its revenue from the same period a year ago, although it flipped to a net loss largely due to its considerable investment in peer carrier TAP Air Portugal.

Any bailout money will strengthen Azul's defenses against the economic damage caused by the coronavirus. The company has furloughed workers and cut many other expenses, but like every airline, it's still vulnerable because of the near-shutdown of its industry.