Please ensure Javascript is enabled for purposes of website accessibility
Log In Help Join The Motley Fool
Free Article Join Over 1 Million Premium Members And Get More In-Depth Stock Guidance and Research
By Jeremy Bowman - Updated May 18, 2020 at 2:44PM

A positive development in a coronavirus vaccine trial helped lift the sector.

The news is clearly a positive development for restaurant chains that have been battered by the pandemic and the shutdowns that have come along with it. Positive comments from Federal Reserve Chairman Jerome Powell in a 60 Minutes interview last night also helped reassure investors and lift stocks today. 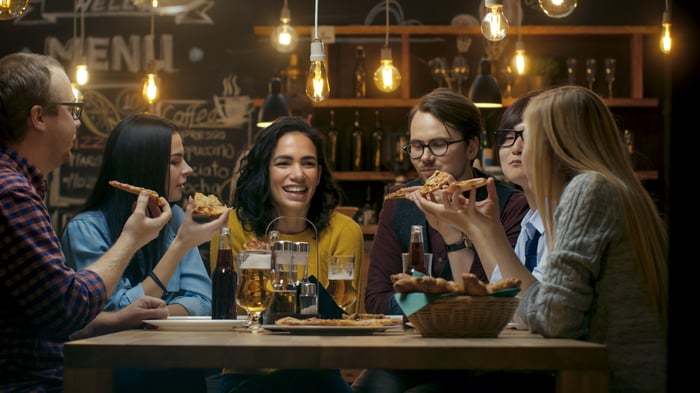 There was no company-specific news out on any of these stocks, but investors are hoping for as quick a resolution as possible to the coronavirus calamity as these casual-dining chains are still limited to takeout and delivery in many of their markets, and even where restaurants opened, in many places, they cannot yet have dining rooms with full capacity. News of a potential vaccine gives investors hope that there is a visible end to the pandemic, and that if these beaten-down restaurant stocks can survive the crisis, they can return to full strength once daily life and the economy return to normal.

Moderna said that in a trial of 45 participants, the first eight for whom results were available showed neutralizing antibodies similar to or greater than those that are found in people who have recovered from COVID-19. Moderna's Chief Medical Officer, Tal Zaks, said that the company would soon begin phase 2 trails with about 600 people, followed by phase 3 trials in July with thousands of participants. If those are successful, he said, a vaccine could be ready by the end of this year or early next year. The result was the brightest sign yet that a vaccine is on the horizon, and Wall Street unsurprisingly cheered.

On 60 Minutes last night, Fed Chairman Powell warned that the economy could get worse and that the unemployment rate might climb as high as 25%, but he also said the central bank was not out of ammunition to further support the economy and facilitate a recovery. Investors have cheered moves by the Federal Reserve and Congress to stimulate consumer spending and boost liquidity to prevent failures, and restaurants have been among the beneficiaries of these programs. Additional action by the Fed would also help lift restaurant stocks.

The restaurant stocks above are all down significantly since the coronavirus sell-off began. Dave & Buster's has been the hardest hit of the group -- it has completely shut down all its locations as its eat-and-play concept requires customers to visit its venues. The others have been able to rely on takeout and delivery.

The casual-dining sector more generally has seen sales recover though April as consumers warmed to the idea of getting takeout from chain restaurants, however, there's still a long way to go to recoup their lost sales. With lockdowns in a number of states still in effect, the foreseeable future still looks rough for these chains, especially as they will need to have social distancing guidelines in place once reopened, which will impact sales.

A survey from Piper Sandler showed that 47% of respondents would visit restaurants as soon as they reopened, a sign of pent-up demand. However, even when sales come back, these chains will have increased debt burdens and, for some, share dilution from the moves they've made to increase liquidity during the crisis. Therefore, it's hard to see these stocks returning to their former heights anytime soon.